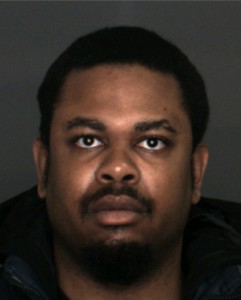 Detectives Wednesday arrested a convicted sex offender from Ontario on suspicion of the rape of a Highland senior citizen during a home invasion earlier this month, authorities said.
Antawon Riley Stubblefield, 27, is accused of rape, oral copulation by force, false imprisonment and home-invasion robbery in connection with the attack and robbery, which took place on the afternoon of Dec. 8 at the victim’s home in the 7800 block of Lankershim Avenue, Highland police officials said in a written statement.
“Investigation revealed that an unknown suspect forced entry into the 67-year-old victim’s residence and attacked her as she watched television,” according to the statement. “The suspect then held the victim against her will inside of her home; during which he sexually assaulted her several times over a four-hour period.”
The attacker stole cash and other items from the victim before fleeing her home. The woman was hospitalized for treatment, and her attacker was not found.
Detectives were notified by crime lab officials Tuesday that DNA collected at the crime scene has been matched to Stubblefield, officials said. Stubblefield was already on felony probation and a registered sex offender for a previous assault conviction.
Officials obtained a warrant for Stubblefield’s arrest, and took him into custody Wednesday when he reported to his probation officer, police said.
Authorities added that detectives are seeking any additional people who may have been victimized by Stubblefield.
According to San Bernardino Superior Court records, Stubblefield was awaiting sentencing in his previous case at the time of the Highland attack. He was released from custody Nov. 16 after being granted a waiver allowing him to be free from custody pending formal sentencing.
The Highland home-invasion took place less than a month later.
Stubblefield had pleaded “no contest” to a count of assault likely to produce great bodily injury and engaging in prostitution stemming from a Sept. 1 arrest, records show. An additional count of attempted forcible rape was dismissed by the court.
He was sentenced under AB 109 guidelines, which state officials say is intended for “non-violent, non-serious and non-sexual” offenders.
He received a sentence of 150 days in jail, with credit for time already served and good behavior. He was also sentenced to three years of Post-Release Community Supervision and ordered to register as a sex offender for life.
He was formally placed on felony probation at a hearing Tuesday, the same day his DNA was linked to the Highland crime scene.
Stubblefield was being held without bail Wednesday at the West Valley Detention Center pending his initial court appearance, officials said.