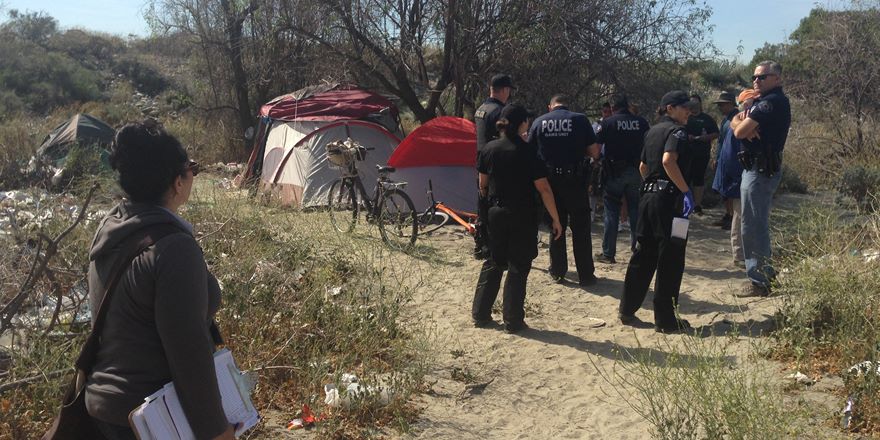 AZUSA >> Police arrested six people for trespassing and outstanding warrants Thursday as police teamed with county officials to carry out a sweep operation of the San Gabriel Riverbed, authorities said.
The arrests came two weeks after officials visited the same area of the riverbed on April 30, advised transients camping there they were trespassing and offered resources available to the homeless, Azusa police Lt. Tim Harrington said in a written statement. Partners included the Los Angeles County Homeless Services Authority, the San Gabriel Valley Consortium on Homelessness, the U.S. Veterans Administration and Volunteers of America.
When police returned Thursday, they encountered six homeless people who had been previously warned to leave the riverbed, Harrington said. All six were arrested on suspicion of trespassing, and three of them had outstanding warrants, he said. Los Angeles County Animal Care and Control officials took custody of four dogs.
“All persons contacted during this operation were again provided information on resources for the homeless that are available to assist them in relocating out of the riverbed,” Harrington said.
Officials have conducted similar sweeps in the past.
The goal of the operation is reduce illegal camping and trespassing in the federally owned riverbed, making it safer and cleaner for those legally hiking in the area, as well as to protect the ecology and groundwater supply, the lieutenant said.
“Furthermore, there has been an increase in the number of brushfires in the area during the last several months and reducing the illegal camping will help to reduce the wildfire danger associated with the makeshift fire pits that are found in the illegal camps,” Harrington said.

PHOTO: Azusa police, joined by other officials and volunteers, meet with transients camping in the San Gabriel Riverbed in Azusa on Thursday, April 30, 2015. (Courtesy of the Azusa Police Department)

Pasadena officials often tout the city’s compassion for the homeless. Certainly the homeless have available to them an impressive array of services. But there are people like Francis Freeman and Aniya Jones, who have clearly fallen through the cracks. I met the couple Wednesday, Here’s a link to their story
I also shot a video which you can watch on YouTube. This is it:

PASADENA — Officials from Union Station Homeless Services are asking for the public’s help in raising money for a new cargo van.

Their own van was stolen several weeks ago by an intruder who broke into the parking lot during the night and drove it away.

Not a lot of new stuff to report in the Long Beach case of five people shot to death at a homeless encampment in Long Beach. Here’s what LA homeless blog is reporting: 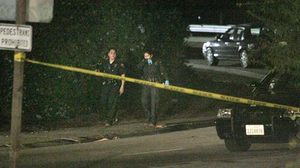 Just like the murder three weeks ago of a homeless man in the Rampart area of Los Angeles, the police have not figured out who murdered the five homeless persons in Long Beach, a large city just south of Los Angeles.
<snip>.

Of course, having five people shot to death has rattled this local neighborhood.

KCBS2/KCAL9 has video from the crime scene here.

Here’s the latest story from our sister paper the Long Beach Press-Telegram: