TEMPLE CITY >> A man escaped kidnappers posing as police officers after they broke into an apartment, pistol-whipped him and placed him in handcuffs Thursday afternoon, officials said.
Two kidnappers showed up shortly after 3 p.m. at the home where the 32-year-old victim had been staying in the 9000 block of Emperor Avenue, near Rosemead Boulevard along the border between Temple City and the unincorporated county area of East San Gabriel, Los Angeles County sheriff’s Lt. Ismael Chavez said.
The men forced their way into the apartment, he said. One of them brandished a black handgun and flashed some type of badge.
Chavez said the intruders told the victim they were police officers and had warrants for his arrest.
When the phony cops tried to handcuff the man, he resisted and one of them struck him in the head with the gun, the lieutenant said.
The attackers then managed to get the man into the handcuffs and lead him outside, Chavez said. As they led him toward a car, he managed to break free from their grasp, slip one of his hands from the handcuffs and run.
Witnesses called 9-1-1 to report seeing a man with handcuffs hanging from his wrist running down the street and yelling for help, Chavez said. The kidnappers fled.
The man was taken to a hospital with minor injuries and released within hours, officials said.
Deputies described the two police impersonators as white men. One stood about 6 feet tall and weighed about 300 pounds. He wore a dark hat. No further description of the second kidnapper was available.
Chavez said the kidnappers used a white, newer-model, BMW 7 Series sedan. A driver was believed to be waiting at the wheel, but no description was available.
The motive in the foiled kidnapping remained under investigation late Thursday, Chavez said. Nothing was stolen during the incident.
Anyone with information can reach the sheriff’s Temple Station at 626-285-7171. Tips may also be submitted anonymously to L.A. Regional Crime Stoppers at 800-222-8477.

PASADENA >> A Pasadena man kidnapped his ex-girlfriend and drove her around the city before police arrested him early Saturday morning, officials said.
Javier Vasquez, 21, was booked on suspicion of kidnapping and false imprisonment, Pasadena police Lt. John Mercado said.
Police received a report about 2 a.m. of a distraught woman sitting on a curb in the 200 block of South Oak Knoll Avenue, he said.
“(She) tells us that her boyfriend forced her into his car against her will,” Mercado said. “He drove her around the city of Pasadena and wouldn’t let her get out.”
The woman tried to escape several times as the car slowed or stopped for traffic, the lieutenant said. “He would grab her by her wrist or hair.”
Vasquez ultimately released the woman on Oak Knoll Avenue and drove off, Mercado said. Police arrested him as a returned home later in the morning.
The victim, an Altadena resident, suffered no serious injuries.
According to county booking records, Vasquez was being held in lieu of $100,000 bail pending his initial court appearance.

PASADENA >> Three attackers kidnapped a woman in Pasadena, beat her unconscious and robbed her before dropping her off in Glendale Wednesday night, police said.
The victim, a 19-year-old Los Angeles woman, suffered “serious facial contusions” in the attack but was hospitalized in stable condition, Pasadena police Lt. John Luna said.
She told investigators she had taken a Metro Gold Line train to Pasadena to sell the suspects a small amount of marijuana prior to the incident, which was reported to police about 11 p.m., police officials said.
The suspects, who she did not know by name, told her to meet them in the area of Fair Oaks Avenue and Orange Grove Boulevard.
She got into the suspects’ newer-model, silver Honda Pilot, Luna said, Inside were two men and a woman. Detailed descriptions of the three suspects were not available.
“The victim heard what sounded like a gunshot and saw one of the windows shatter,” Luna said. The two men then began punching the woman in the face until she lost consciousness.
“She came to when the suspects dropped her off in the city of Glendale,” Luna said. The woman flagged down a passer-by, who drove her to a hospital.
The woman’s cell phone had been stolen, along with the marijuana, Lt. Vasken Gourdkian said.

PASADENA >> A man tried unsuccessfully to rob and kidnap a woman inside a parking structure at the Paseo Colorado shopping mall in Pasadena Wednesday, officials said.
Joshua Brandon McKnight, 19, of Pasadena was arrested in connection with alleged crimes, which took place about 10:50 a,m. in the parking structure of the mall in the 200 block of East Colorado Boulevard, Pasadena police Lt. John Luna said.
A 35-year-old Pasadena woman exited her car when a man approached, the lieutenant said.
“The suspect simulated a weapon in his pants pocket and told the victim she was being robbed and demanded she get back into the car,” Luna said.
The woman offered the man her purse, but he again ordered her to get back into her car, he said.
When the would-be robber was momentarily distracted by a passing vehicle, the woman took the opportunity to run to the mall’s security office, Luna said. Mall security then notified police.
Officers detained McKnight nearby, but released him when the victim was unable to identify him as her as the suspect, Luna said.
But police later found surveillance camera images of the suspect, whom they were able to identify as the man they had previously detained.
Officer found and arrested McKnight shortly after 3 p.m. at the Jackie Robinson Community Center, 1020 N. Fair Oaks Ave., according to police and Los Angeles County booking records. He was being held in lieu of $100,000 bail pending his initial court appearance. 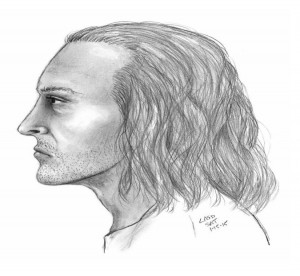 MONTEBELLO >> Police released a sketch Friday of one of two men sought in connection with the failed kidnapping of a Montebello woman at the laundry room of an apartment building earlier this week.
The woman and her husband fought of the two attackers, who remain at-large, Montebello police officials said in a written statement.
The crime took place about 9 a.m. Monday in the laundry room of an apartment complex in the 100 block of North 10th Street, Sgt. Marc Marty said.
One of the two men, who was wearing a mask, grabbed hold of the woman by the hair and began pulling her into the laundry room, the sergeant said. The woman, who was in her early-30s, managed to break free. The two suspects ran in different directions.
”The victim’s husband was nearby at the time and saw a male suspect run down his driveway,” according to the police statement.
“The victim’s husband chased and caught the suspect in the street and a fight ensued,” the statement said.
During the fight, the masked suspect who initially grabbed the woman returned to the scene and punched the husband, causing him to release the other suspect.
Both attackers fled in a white, 1995- to 2000-model Chevrolet S-10 pickup truck, Marty said.
Neither the woman or her husband suffered significant injury, police said.
As the suspects fled, they dropped a bag containing rope, Marty said.
Since the crime was not completed, it was unclear what the attackers’ ultimate goal was, the sergeant said. It was unclear if they committed the failed kidnapping as part of an attempted robbery, a sexual assault or some other crime.
Police described the first suspect, who grabbed the woman, as a male, 6 feet 2 inches tall, wearing a mask, gloves and a dark-colored gray and black shirt and blue jeans.
His accomplice was described only as male, wearing a gray hooded sweatshirt and a baseball cap.
Anyone with information was asked to contact Montebello police Detective Zabala at 323-887-1254.

George and Jennifer Dejongh, 34, are shown in video below shortly after their capture in Mexico nearly two weeks ago. Jennifer is accused of taking her children to Mexico after temporary custody was awarded to their grandfather Rep. Gary Miller, R-Brea.
She claims the children were abused by their father, Miller’s son Brian.
An attorney for the Millers denied the accusations last week.

COVINA — A man tried to kidnap a 17-year-old girl Thursday, and police are asking the public’s help in finding the would-be abductor.
The incident occurred about 2:30 p.m. on Arrow Highway between Lark Ellen and Azusa avenues, just north of Gladstone High School, Covina police Lt. John Curley.
The teen was walking with her 2-month-old baby in a stroller on the sidewalk when a man passed by in a white van and whistled at her, the lieutenant said.
The girl continued walking, but the man pulled his van over and ordered her to get inside, he said.
When the girl refused, the man grabbed onto the stroller, but the girl was able to strike him and escape, Curley said.
The failed kidnapper is described as a Latino man in his 50s, about 5 feet 5 inches tall, weighing about 180 pounds, with black hair and brown eyes, Curley said.
He had a silver upper tooth and wore a white shirt and blue pants, he said.
The can was described as a white Chevy Astro van with windows all around, Curley added.
Anyone with information is asked to call Covina police At (626) 858-4413.

Cops said this isn’t related to an incident that occurred in West Covina in early January, but the circumstances sure seem similar. Here’s the story:

HACIENDA HEIGHTS – A man jumped out of a car Wednesday and tried to grab an 8-year-old walking to school, but the attacker released the boy when he realized the child’s mother was following a mere 15 feet behind, officials said.
“The mother saw it and yelled at the guy to let go of the boy,” said Industry Sheriff’s Sgt. Tom Wilson. “He jumped back in the car and fled.”

The boy and his mother were on their way to Palm Elementary School in Hacienda Heights at about 8 a.m. when a gray car pulled up along side him. A man got out of the car and grabbed the boy, authorities said.

Wilson said the man was driving a gray two-door Honda Civic with a missing front bumper and tinted rear windows.

The man is described as a 49-to-50 year old Hispanic, standing about 5 feet 4 inches and weighing about 200 pounds, Wilson said. He has dark, short hair shaved on the sides, a thin mustache and a scar in the shape of a “V” under his left eye.

El Monte police announced this afternoon they’ve captured a woman suspected in the Dec. 20 kidnapping and robbery of a San Gabriel woman.

Here’s the basics of the case.

Two people were kidnapped at gunpoint from Union Station in Los Angeles and taken to Baldwin Park where they were robbed, officials said. *

Interestingly enough, even though we knew the kidnapping had taken place when we called Baldwin Park’s watch commander this a.m. he said there was nothing going on and the night was quiet.

If this is what passes for a quiet night in Baldwin Park, I’d hate to find out what a busy night is really like:

BALDWIN PARK – Two people who were kidnapped at Union Station were allegedly brought to the 3300 block of Big Dalton Road, where they were beaten and robbed, according to Sgt. Kevin Gauthier of the Baldwin Park Police Department.

Baldwin Park police responded to the overnight incident, but officials had little information this morning.