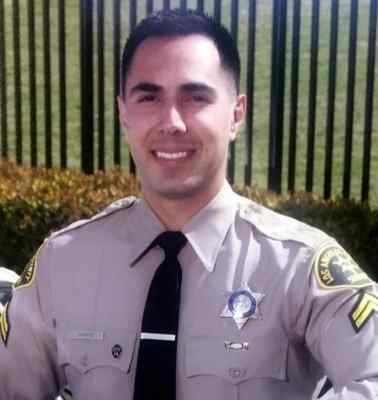 After months of tireless efforts by colleagues and loved ones, a life-saving bone marrow match had been found for a Los Angeles County sheriff’s sergeant who is battling leukemia, supporters announced this weekend.
Fellow deputies have been organizing bone marrow matching events at sheriff’s stations and other sites throughout the region in hopes of finding a desperately-needed matching bone marrow donor for Sgt. Jorge Chavez, a 17-year-veteran of the sheriff’s department. She sergeant is in need of a bone marrow transplant after being diagnosed with acute myeloid leukemia in December.
And on Friday, the “Be a HERO for Sergeant Jorge Chavez” Facebook page, dedicated to helping the deputy and his family through their journey, announced, “the news we have all been waiting for!”
The online community went on to share a letter from the Chavez family:
“It is with tremendous thanks and praising God that we share with you that a matching donor has been found and Jorge will be receiving his transplant within the next couple of weeks,” it said.
“Although we still have a long road ahead of us, your prayers, help, support and caring efforts have set us on our way. Earth Angel hero wherever you are, thank you. May our heavenly Father bless you forever. You will always have a very special place in our hearts.
“We now hope & pray that everyone will keep their hearts and minds open to the possibility of being a donor for another person who needs a hero too. With all our hearts, thank you,” the letter continued.
Chavez was most recently assigned to the sheriff’s Narcotics Bureau, colleagues said. Previous assignments included the sheriff’s San Dimas and Industry stations.
Despite the encouraging news, the community’s help is still needed, both for Chavez and other cancer patients in need.
Chavez will continue requiring blood and platelets over the coming months, according to the supporters’ Facebook page. Donors were encouraged to make an appointment at the City of Hope in Duarte. If blood and platelet donations are not needed by Chavez, they will not be wasted, as they will be used to help other patients.
“Also, although we have been fortunate enough to find Jorge his match, many other families — including four LASD families — have not been so fortunate, YET,” according to the web page. “Please continue to spread the word about being a donor and about the upcoming events. All of the events being held in support of Jorge can help anyone! Jorge would like to see many more families given the gift of life!”
For more information, visit Be a HERO for Sergeant Jorge Chavez online at www.facebook.com/sgtjorgechavez.

“MSK is a tagging crew that we know to have ties to several other crews here in L.A., including those that Benson is a part of,” said Thibodeaux, “We believe a tagger, Jason Williams, who uses the tagger moniker REVOK, is a leading figure in the MSK crew.”

In April Williams was convicted and sentenced to 180 days in jail after a judge found that he had violated the terms of his probation in a previous vandalism conviction. He was found to have violated his probation on a misdemeanor vandalism charge by failing to pay adequate restitution to his victims, officials said.

Williams was arrested by deputies with the Sheriff’s Metro Transit Services Bureau Special Problems Unit prior to his April conviction.

“These taggers are not misguided kids,” Detective Sergeant Ron Marquez said in a prepared statement, “These suspects are in their 20s and 30s. They are adults who pass themselves off as artists, when in reality, they’re criminals who commit vandalism crimes that cost property owners and taxpayers a lot of money to clean up.”

To see some of RUETS work visit:

A report in USA Today notes that the FBI claims criminal gangs are responsible for 80 percent of our nation’s crime. Here’s the story.

No Chargers in Industry this year, at least that’s a what a report in the San Diego Business Journal claims.

Local soldier Sgt. Hy Thai, of Monterey Park is profiled on News Blaze, for his work in Iraq.

Detroit cops slow to respond to reports of frozen body in abandoned warehouse, according to the Detroit News and the Associated Press, which cites the indifference of cops there as part of the city’s overall problem.

LASO unveils new technology in the pursuit of criminals.

Deputies with the Sheriff’s Special Enforcement Bureau hunted a hacienda Heights neighborhood for four folks suspected in a robbery. Interestingly enough, Sheriff’s homicide detectives also participated in the search as did human tracking bloodhounds.
In the end, the searchers had no luck. But we learned something interesting about schools in the Hacienda La Puente school district — they’ve become old pros on lockdown.
Here’s a link to Daniel Tedford’s story, which contained a startling admission from a school district administrator:

Students at Kwis Elementary School, Newton Middle School, Los Altos High School and Shadybend Elementary School were kept in classrooms from the start of school until noon while authorities searched for two of the four suspects.
School officials were not fazed.
“This is a very normal situation. They always notify our school district,” said Norman Hsu, school board member for the Hacienda-La Puente District. “These happen very often. This is not the first time. This is like the fourth time this month.”

There’s a unit of the Sheriff’s Department called Advance Protection and Surveillance. Over the past two years they’ve put some license plate readers in the field and they’ve had some pretty impressive results.
The manufacturer of the device, Federal Signal, claims that the department has caught a serial rape suspect and a man suspected in three homicides using the technology.
Here’s a portion of a press release from Marketwatch.com:

Recently, the Federal Signal ALPR network has assisted LASD in solving two key cases. A serial rapist in South Los Angeles approached female pedestrians and forced them into his vehicle at gunpoint. A victim obtained a license plate number and provided police with a vehicle description; however, the address for the registered owner of the vehicle was no longer correct. With the help of Federal Signal’s ALPR Back Office System Software (BOSS) by PIPS, investigators pinpointed prior vehicle sightings, which led them to the suspect’s workplace. The employer provided a cell phone number for the suspect, which enabled police to locate the suspect and make an arrest.

In another case, a shooting left one victim dead. Witnesses provided police with a partial license plate and vehicle description. A query of this data in the Federal Signal BOSS system provided investigators with a full license plate number which enabled them to identify the suspect. Surveillance was established on the suspect’s address, and the suspect was in custody less than 24-hours after the shooting. The suspect was also wanted in connection with three other homicides.

Sheriff Lee Baca responded to a series of articles that have appeared in this paper over the past week. Here’s the top of our story:

LOS ANGELES – The Los Angeles County Sheriff’s Department is reexamining how it collects towing fees in response to allegations a former traffic sergeant took nearly $500,000 from the city of La Puente in impound revenues, officials said.

“We are doing that now,” Sheriff’s spokesman Steve Whitmore said. “We are probably going to go to a cashless system. Using something like an ATM card to make it more difficult for theft to occur.”

Whitmore also said the department is reviewing several other internal policies and will consult with the Board of Supervisors.

Former Sgt. Joe Dyer, who used to work out of the Industry sheriff’s station until he retired in May, has been under investigation since the beginning of the year.

The quarterly report on the Sheriff’s department filed by the County Office of Independent Review is a detailed list of investigations into a variety of miscounduct by employees of the Sheriff’s Department. Much of it never gets reported in the MSM.

There are stories of domestic violence, theft, beatings and sex with inmates at the county jail.

Interestingly enough there appears to be no mention of Industry Sgt. Joe Dyer, accused of embezzling something like $500,000 worth of towing fees from the City of La Puente. The case is under investigation by the Sheriff’s Internal Criminal Investigations Bureau, and reportedly has been refered to the OIR. *

* An anonymous caller points out that a similar incident is mentioned on page 8 of the report. It also says that it was turned over for prosecution but that the DA’s office rejected the case.

Here’s the text from that entry:

Subject allegedly removed money that the station had collected for traffic impound fees, and failed to follow protocols for collection and documentation of these funds. Investigation is complete; final resolution is pending. Criminal investigation failed to establish a basis for prosecution; Case rejected in July of ’07.

**Officials now say that was a separate case from another station. Apparently the problem is widespread in the sheriff’s department. Anyone want to bet that the policies for handling tow money is about to change? How many other cities have been shortchaged?

Tania Chatila pieced this story together from a variety of sources who indicated something fishy was happening in La Puente after Industry Capt. Mike Smith was transferred on a Sunday afternoon.

Here’s the top of the story, and a link:

LOS ANGELES – A sheriff’s deputy is suspected of embezzling nearly half a million dollars in towing fees from the city of La Puente, officials said Thursday.

“My belief is that no one is above the law and I think that the criminal justice system will act appropriately in this case,” Baca said Thursday.

Dyer, who could not be reached for comment, retired in May after detectives “established a need for an investigation regarding funds at the Industry station that were missing,” Baca said.

The District Attorney is aware of the case, Baca said. He expected it would be submitted for review by the end of the year.

“We’ve done as much as we can to build a good strong case,” Baca said.

The investigation was launched in January.