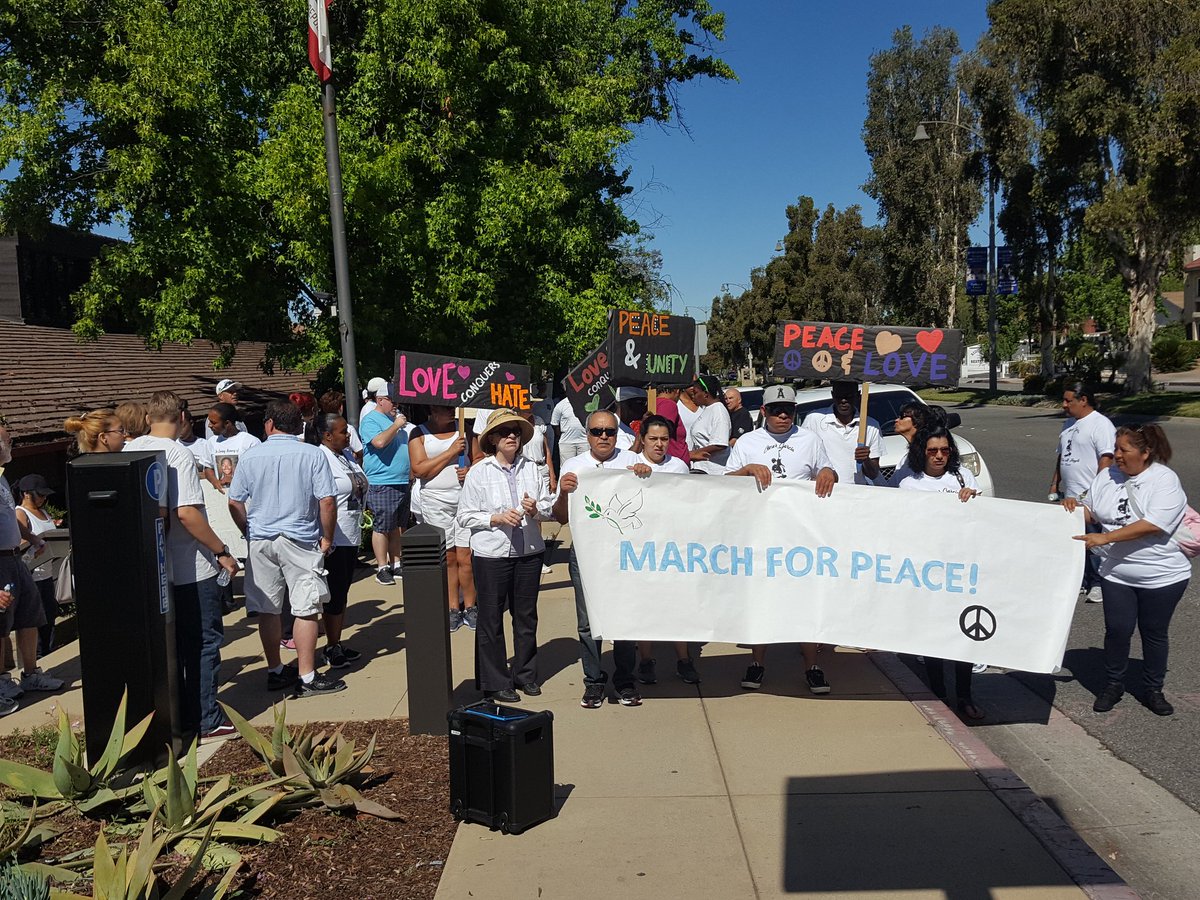 Dozens of community members, including several families who have lost loved ones to violence, marched through the streets of Duarte and Monrovia on Saturday to respond to recent shootings in the area with a message of peace.
The Duarte-Monrovia Peace March, organized by the Community Mediation Team, drew demonstrators of all ages to Duarte City Hall before they made a 1.5-mile trek to the Mary Wilcox the Mary Youth Center in Monrovia. Marchers wore white clothing and carried signs reading, “Peace & Unity,” and “Love Conquers Hate.”
Monrovia police Chaplain Steve Martinez had a message for the family members of slain loved ones who took part in the event
“I know it’s been difficult for you. It could have weeks ago, months ago, years ago, but you’re here today, and we are here to support you, and show love to your family and to honor the memory of the person that you lost and that you still love,” he said.
“And this is also a sign to show people in the community that we want to do something. We want to make a change.”
The Monrovia-Duarte community has seen four people killed and four others wounded in a space of at least eight shootings reported since January.
Among them was 39-year-old Kirinda Morehead of Duarte, who was shot to death on Feb. 18 as he arrived home with his fiancee and two young children in the 2300 block of Bashor Street.
“As he got out of his truck, someone shot him 12 times,” said Diane Myrick, the mother of Morehead’s fiancee. Though the couple was not yet married, she said she already thought of Morehead as her son-in-law.
“He was a hard-working, loving, family-loving, Christian man who did not deserve to be gunned down in the street like that in front of his children and his fiancee,” she said.
“All we can do now is just hope and pray that the person who perpetrated this act this act upon this family (is caught),” Myrick said.
“And we just want to thank the city of Duarte for all that you’re doing to ensure that the these streets are safe,” she said. In 25 years living in the area, “I’ve never experienced anything like we have in the past few months.”
“It’s a struggle day-by-day,” Myrick said. “These shooters just pull up, and they have no clue what they’re leaving behind. No clue. But God is able, and we’ll get through this together.”
The family of 18-year-old Oscar Garcia, who was shot to death in his hometown of Monrovia on April 22, carried pictures of the slain Canyon Oaks High School as they marched.
Garcia was visiting with friends in a residential garage in the 100 block of West Cypress Street while visiting friends when an attacker opened fire on the group of teens. Garcia was mortally wounded and another teenage boy was seriously injured in the shooting, but survived. Investigators suspect the shooter was looking someone else when he encountered and shot the teens.
“Without any though, he just went ahead and shot my brother,” David Garcia said. “He was a good kid.”
Garcia was an avid skateboarder who loved spending time at the Monrovia Skate Park, family members said.
To honor Garcia’s memory, loved ones have begun circulating a petition to formally rename the park after him. The petition is available online at www.change.org/p/the-community-of-monrovia-naming-the-skatepark-after-oscar-garcia.
The family of 18-year-old Malcolm Mency of Duarte also added their voices to the march.
Mency, who had just become a father, was shot to death at Broderick and Felberg avenues, in an unincorporated county area between Duarte and Monrovia, as he walked home from work on Dec. 22.
“I have in my heart a long list of families impacted that have not made the headlines,” said CMT Co-Chair and former Duarte Mayor Lois Gaston, who hosted the event.
Representatives from numerous local churches, organizations and government agencies took part in the assembly.
Capt. David Flores of the Los Angeles County sheriff’s Temple Station, which patrols Duarte and nearby unincorporated county areas, said he was glad to see the strong show of community involvement.
“My heart goes out to all of you who have lost someone or know someone who was lost,” he said.
“It’s good that we’re here,” the captain added. “This comes down to citizenship and making a stand for what’s right and coming together for the community, so I’m so happy to see everyone here. When the community comes together and we partner together, good work can be done. And truly this a great step in that direction.”