ANGELES NATIONAL FOREST >> A small airplane crashed in the Angeles National Forest north of Altadena Sunday morning, killing a man.
On man was pronounced dead at the crash scene, Deputy Kimberly Alexander of the Los Angeles County sheriff’s Information Bureau said. There were no initial reports of additional injuries or additional occupants aboard the plane.
Rescuers searched the Angeles National Forest near Mt. Wilson for more than seven hours before finding the crash site after the small airplane vanished from radar amid inclement weather Sunday morning, officials said.
The missing aircraft was first reported shortly after 9:10 a.m., Los Angeles County sheriff’s officials said.
“Apparently, it went off radar,” sheriff’s Lt. Randy Tuinstra said.
•Flight path of missing plane
Federal Aviation Administration spokesman Allen Kenitzer confirmed officials lost communications with the single-engine airplane.
“We have a reported missing aircraft, a Cessna 182. … Traveling from Montgomery Field in San Diego to Santa Monica Municipal Airport, he said. “Contact was lost 17 miles east of Van Nuys.”
No witnesses reported seeing the aircraft in trouble, Tuinstra said.
According to FlightRadar24.com, the aircraft’s last reported altitude was about 4,000 feet, below the elevation of nearby mountain tops.
Bad weather prevented sheriff’s department helicopters from joining the search.
“Visibility is very, very low right now,” Tuinstra said. “We’re hoping that will burn off soon and we can get a better look.”
Members of the Montrose, Altadena, San Dimas, Sierra Madre and Canta Clarita search and rescue teams continued scouring the area on the ground until the weather improved in the afternoon, allowing search helicopters to join in the operation, officials said. 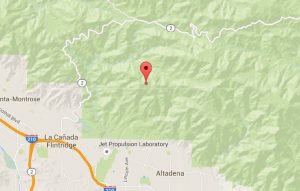 The aircraft crash site was found near the 4,466-foot-tall Brown Mountain, in the forest north of Altadena, according to Deputy Juanita Navarro-Suarez of the sheriff’s Information Bureau.
The airplane is registered to San Diego Skylane LLC, according to FAA records. It has a valid, standard-classification flight certification.

Leave it to sheriff’s Spokesman Steve Whitmore to put it all in perspective.

“Here is what’s important: The people got saved.”

Perhaps the most telling detail about the whole operation is on Tim Rutt’s altadenablog, which has a picture of the patients being loaded into a paramedic van — not a helicopter.

AZUSA — A 74-year-old man who was trapped overnight after his SUV plunged 125 feet off of Highway 39 was rescued by helicopter Monday morning.

“He’s in pretty good shape for a 74-year-old who was down there in the cold all night,” Los Angeles County Fire Battalion Chief Jim Geandee said.

ANGELES NATIONAL FOREST — Fire officials flew a hiker out of the Angeles National Forest north of Azusa Monday after he became injured in a fall.
The rescue occurred just before 5 p.m. near San Gabriel Canyon and West Fork roads, Los Angeles County Fire Department Supervising Dispatcher Melanie Flores said.
The man, who was estimated to be in his 30s, did not appear to suffer life-threatening injuries but was flown to Huntington Hospital in Pasadena as a precaution, Los Angeles County Fire Department Capt. Tim Bloom said.
The man reported falling four to six feet, while his family members told officials he fell from about 45 feet.
His exact condition was not available.