VALINDA >> A man raped and robbed a woman at knifepoint behind a Valinda shopping center Wednesday, authorities said.
Deputies apprehended a suspect several hours after the 6:45 p.m. attack at a small shopping center in the 1400 block of Valinda Avenue, just north of Maplegrove Street in the unincorporated county area of Valinda, Los Angeles County sheriff’s Sgt. David Cortinas said.
The suspect approached the woman and ordered her behind a building at knifepoint, the sergeant said. He sexually assaulted the woman and robbed her of her cell phone before fleeing.
The victim, a woman in her 20s, was taken to a hospital for treatment, Cortinas said. She suffered no life-threatening injuries.
Deputies searching the area and following up on leads found and arrested the suspect — a man in his mid-20s — without a struggle in the area shortly before midnight, Cortinas said.
His identity was not available pending the booking process.

PASADENA >> A man with a handgun held up the clerk at a Pasadena liquor store late Thursday, officials said.
The robber brandished a pistol when he walked into Sunshine Liquor, at Colorado Boulevard and Madre Street, about 8:20 p.m., Pasadena police Lt. John Luna said.
He confronted the clerk, a man in his late-50s, and demanded money from the cash register, Luna said. The clerk complied, and the gunman ran off.
A detailed suspect description was not available.

EL MONTE >> A knife-wielding man tried, but failed, to rob one El Monte market Thursday before successfully robbing a second store 10 minutes later, police said.
The first crime took place about 1:10 p.m. at Superior Grocers, 10683 Valley Blvd., El Monte police Lt. Ben Lowey said.
The robber brandished a knife as he tried to hold up the store but ultimately fled empty-handed, the lieutenant said.
About 10 minutes later, a second crime was reported about two miles away at a Circle K, 12004 Ramona Blvd., Lowry said. In that case, the robber obtained an unknown amount of cash.
In both incidents, the robber was described as a man wearing a black hat and a bandana covering his face, driving a gray minivan, Lowry said.
The investigation is ongoing, and anyone with information can reach El Monte police at 626-580-2100. Tips may also be submitted anonymously to L.A. Regional Crime Stoppers at 800-222-8477.

INDUSTRY >> A man pulled a gun on a security guard while stealing a pair of work boots from a store at the Puente Hills Mall in Industry Tuesday afternoon, authorities said.
The incident unfolded about 1:30 p.m. when a female loss prevention officer noticed a man leaving a Sears store at the mall, 1600 S. Azusa Ave., with a pair of work boots he had not paid for, Los Angeles County sheriff’s Sgt. Gina Eguia said.
The security guard confronted the thief, Eguia said. He pulled out a handgun, pointed at her, pulled back the hammer and ordered the woman to get away.
The robber, a man of about 40, fled the area in an older-model, black Nissan Maxima, Eguia said.

LA MIRADA >> Los Angeles and Orange county law enforcement officials detained two suspects in Buena Park within minutes of an armed robbery at a La Mirada cell phone store Saturday, authorities said.
The crime took place about 10:20 a.m. at a wireless store in the 15000 block of Imperial Highway, near La Mirada Boulevard, Los Angeles County sheriff’s Sgt. Jaime Alvarez said.
At least one man entered the store armed with a handgun and demanded cell phones before fleeing with an unknown number of the devices, the sergeant said.
Police in Buena Park soon spotted a vehicle matching the description of the one used as a getaway car in the robbery and stopped it at Valley View Street and Orangethrope Avenue, just across the county line, officials said.
Two men were detained, and a handgun was recovered, Alvarez said.
The investigation continued Saturday afternoon. 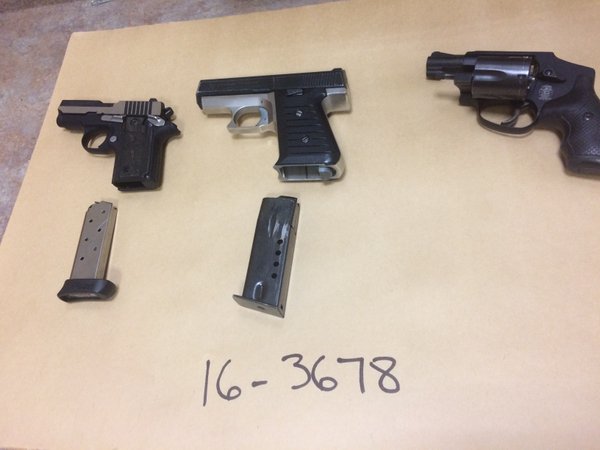 COVINA >> Police arrested a probationer found with three handguns, a ski mask and cash in Covina Saturday afternoon, police said.
Police pulled over a car in which Thomas Michael Mulero, 28, of Ontario was riding as a passenger in just before 5 p.m. at Citrus Avenue and Rowland Street, Covina police Lt. Ric Walczak said. Officers stopped the car after noticing Mulero drinking beer.
A search of Mulero’s backpack turned up two semi-automatic pistols and one revolver, the lieutenant said. Police also seized a ski mask from the car and cash from Mulero’s person.
Mulero was jailed on suspicion of weapons violations, investigation of robbery and investigation of receiving stolen property as detectives continued looking into where the guns and cash came from, Walczak said.
The woman driving the car, as well as a second woman riding as a passenger, were not arrested.
Walczak said Mulero is already on Post Release Community Supervision, or felony probation, under AB 109 guidelines for a previous assault conviction.
According to Los Angeles County booking records, Mulero was being held in lieu of $50,000 bail pending an arraignment hearing, scheduled Tuesday in West Covina Superior Court.

COVINA HILLS >> A group of three robbers used a rock to attack two FedEx delivery men and steal several packages from them Wednesday afternoon, authorities said.
The crime unfolded about 3:40 p.m. in a residential neighborhood in the 20600 block of Via Verde Street, in the unincorporated county area of Covina Hills, Los Angeles County sheriff’s Lt. Tonya Edwards said.
The three attackers approached the two delivery men and attacked them with fists, feet and rock, the lieutenant said. The robbers then fled with several packages.
One of the delivery men was taken to a hospital for treatment of a 3- to 4-inch gash on his head, Edwards said. The other delivery man suffered apparently minor injuries and declined to be taken to a hospital.
The robbers were described as three Latino men in their early-20s, of average height and weight. They fled the area in a blue minivan.
Anyone with information can reach the sheriff’s San Dimas Station at 909-450-2700. Tips may also be submitted anonymously to L.A. Regional Crime Stoppers at 800-222-8477. 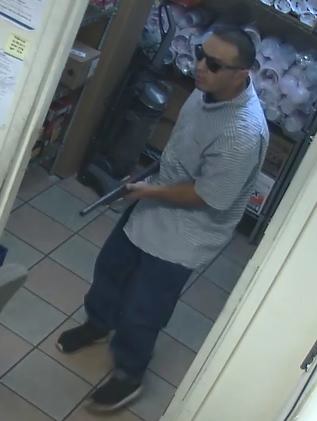 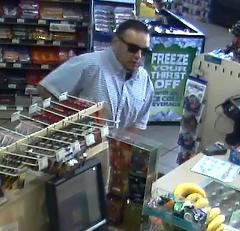 his car in hopes of generating tips from the public, Luna said.
He was described as Latino, 5 feet 4 inches tall, 170 pounds, of medium build, with black hair. He wore sunglasses, a white polo shirt with tan stripes, blue jeans with cuffs and black tennis shoes with white soles.
Anyone with information is asked to contact El Monte police at 626-590-2114. Tips may also be submitted anonymously to L.A. Regional Crime Stoppers at 800-222-8477. 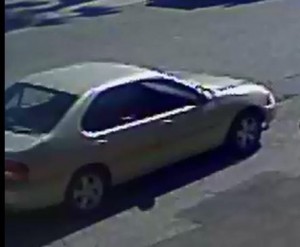 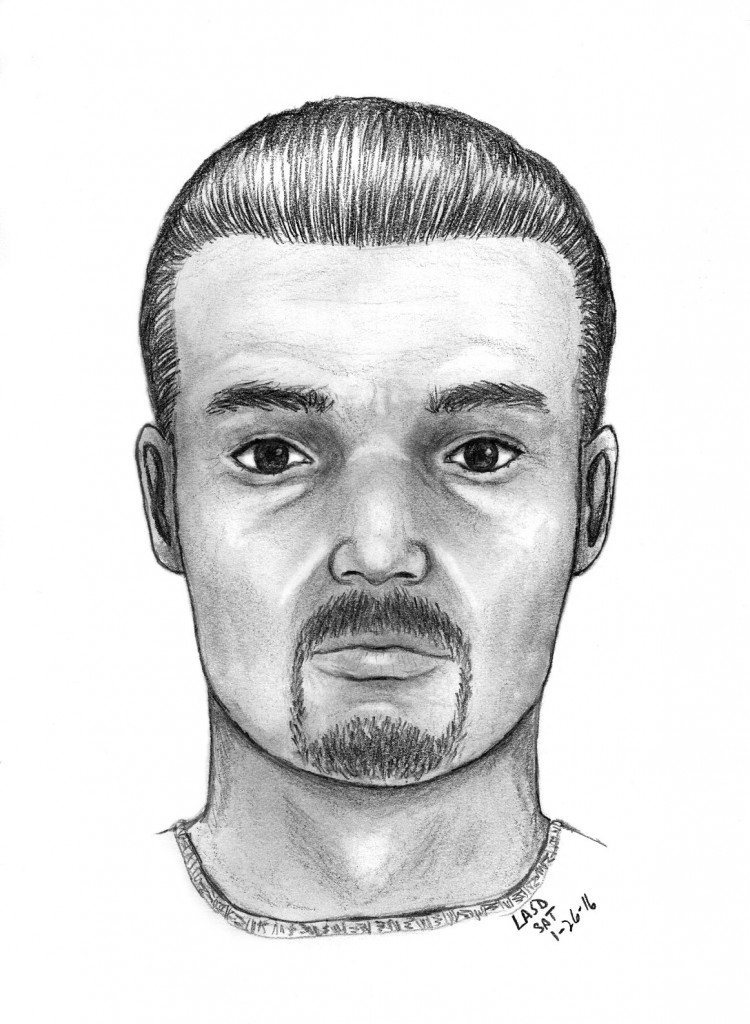 HACIENDA HEIGHTS >> Investigators Thursday released a sketch of a man who robbed a woman of her purse at gunpoint inside the women’s restroom at a Hacienda Heights park last week.
The crime took place about 3:35 p.m. Jan. 22 at Countrywood Park, 16817 Copper Hill Drive, Los Angeles County sheriff’s officials said in a written statement.
“The victim was exiting the restroom stall when she was confronted by the suspect, who was holding a black handgun and demanded her purse,” according to the statement.
The woman handed over her purse, and the robber fled in an older-model, tan or brown, four-door Toyota Camry. He was described as a Latino man between 30 and 40 years old, 5 feet 8 inches tall, 180 pound, with black hair, brown eyes and a goatee. He wore a gray shirt and dark blue pants.
Anyone with information is encouraged to contact Detective Steven Lanigan of the sheriff’s Parks Services Bureau at 661-294-3544.

PASADENA >> Police are seeking a man who pulled a handgun on two gardeners in Pasadena during a failed robbery Thursday.
The two victims, a 51-year-old man and an 18-year-old man, were sitting on a curb in the 2400 block of Lambert Drive eating their lunch about 11:30 a.m. when the would-be robber approached in a white compact car, Pasadena police Lt. Mark Goodman said.
“He drove up beside them and he pointed a chrome semi-auto handgun at them and demanded their money,” Goodman said. The gardeners replied that they had no money.
The robber again demanded cash, and the victims again told him they had none, before the gunman drove off empty-handed, Goodman said. He was described as a Latino man between 30 and 35 years old, with a mustache.