We’re working to verify these stories now. Just thought I’d share some of the mail. First a car crash Sunday in Rowland Heights:

There was a car crash on May 17th, 2009, Sunday. My fiance was behind the car when it got hit by an suv, the car flipped over and landed in Joe’s Crab Shack. My fiance saw the car flipped upside down and he saw the passenger with their eyes open and blood everywhere. He was sure they had passed away, and has been pretty tramatized about it. I’ve been looking everywhere on the internet to see if it was reported and I havent found anything. I was wondering if you will be reporting it? or is there anywhere that they might where I can find it. I just would like to give him some peace of mind and me as well. Thank you so much 🙂 It happened in Rowland heights by the Puente Hills Mall.

Next, a stabbing in Highland Park (also Sunday):

There was a stabbing in Garvanza Park near the corner ofAvenue 64 and Meridian last night (Sunday, the 17th) at approximately6 pm. The small park was full of families at that time and I believe thestabbing victim has since succumbed (based on the memorial that nowstands in the park). There was a heavy LAPD presence in the park justafter the slaying.
As I have seen no mention of this incident in the media anywhere, I thoughtI’d bring it to your attention.

Questions about the Mongols motorcycle gang:

I’ve recently become aware that they’remaking a film about William Queen’s book, “Under and Alone.”
After reading the book, I began to wonder how The Mongols got to be what they are today. I knew one of them, very briefly, 30 years ago, and he and his friends were not like the book described at all.
I read the article in the SGV Tribune and,although they weren’t boy scouts,Tony Vodnik’s description was more what I remember.
He may be able to answer some questions for me.
If you have a way I can contact him via email, and can share that info with me – or forward this to him, I’d appreciate it.

Finally, a drive-by in Rowland Heights:

Care to chime in on any of these incidents?

Looks like crime in the Valley soared over Easter Week. Shootings in La Puente, Rosemead and a guy in West Covina beat and sliced up his wife, according to the cops.

Ladies getting ready for Easter even had to be careful in a Rowland Heights nail salon.
Oh, and apparently Centinelhas returned to the Foothill Cities Blog.
Such is life in the SGV. I wouldn’t trade it for any thing else though.

A man convicted of slaying two coeds in Rowland Heights back in the 1980s bought his way off Death Row by confessing to the killing of a seven-year-old Northern California girl in the early part of that decade.

Wayne Harvey Smith, 61, will spend the rest of his life in prison. Here’s a link to Brian Day’s story (and the top portion):

In order to avoid execution for the 1983 shooting death of 18-year-old Stacy Belcher of Rowland Heights, Wayne Harvey Smith, 61, cooperated with investigators and admitted to killing a 7-year-old girl in Weaverville in 1980, Trinity County sheriff’s Detective Bryan Ward said. He will not be prosecuted in that case.

“I’d rather have seen the death penalty,” Stacy Belcher’s father, Charles Belcher, said, “but the fact that this other family has closure, that makes it worthwhile.”

POMONA – A woman accused of slashing her husband two death with a sword and smothering their two young children as they slept in their Rowland Heights home in 2007 entered a not guilty plea in court Tuesday, officials said.

She is due back in court March 5 for a “status hearing,” in which prosectors and defense attorneys will meet to determine if they’re ready for trial, Los Angeles County District Attorney’s Office spokeswoman Jane Robison said.

A trial date is scheduled to be set April 15, she added.

She allegedly stabbed her husband, 27-year-old Neal Williams, 97 times with a sword.

The couple’s two sons, Devon, 7, and Ian, 3, were smothered to death with a pillow in their beds, prosecutors allege.

According to court records, Manling Williams is being held without bail.

Captain Daniel Minor, commander of the CHP’s Santa Fe Springs office and the assistant director of the state Alcoholic Beverage Control as well as friends and family of Ondrea Alverez will be on hand at a press conference tomorrow in Santa Fe Springs.

The fatal accident occurred in March in Rowland Heights.

Officials will announce the arrests of two individuals in the death of Ondrea, a 20-year-old Bellflower woman, as well as announce the closure of a restuarant where alcoholic beverages were served to minors, officials said.

The testimony came during a 90-minute preliminary hearing for Williams, who is accused of using a Japanese ninja sword to slice her husband to death.

If convicted at trial, Manling could be put to death.

She is also accused of suffocating the couple’s two young boys, Ian, 3, and Devon, 7, with their own pillows as they slept. Sheriff’s Homicide Sgt. Donald Walls’ voice quavered as he told the tale.

No one except Neal’s killer knows how long it takes to stab someone 97 times.

Until Monday no one knew the true extent of the horror that permeated the Williams’ home on that hot August night, thanks to a tight-lipped DA protecting what now appears to be a slam-dunk case.

Neal’s mom, Jan Williams of Whittier, waited months for a preliminary hearing to occur. For no apparent reason, delay after delay prevented the hearing while a judge in the case heard several sealed motions.

Throughout, prosecutors never adequately prepared Jan for what she would hear Monday.

From neighbors and press accounts, Jan had a vague idea of what happened. Neal’s death certificate simply put his cause of death as “sharp force trauma.”

The boys’ deaths were the result of “suffocation.”

Nothing and no one mentioned the volume of blood splattered in the bedroom or the hallway where Neal died.

No one told Jan that Manling confessed to waiting until Neal fell asleep and became vulnerable before she slipped on a pair of rubber gloves and slashed him across the chest with the sword.

No one told Jan about the look of terror frozen in the little boys’ eyes as they lay dead in their bedroom. She had to hear it in a sterile courtroom setting just like everyone else.

When the hearing was over, she posted a simple status message on Facebook: “Jan is in shock.”

The depth of her feelings ran much deeper.

“Ninety times,” she wrote in an e-mail. “My son was stabbed more than 90 times. I just don’t know how to even absorb that. How can you stab someone 90 times? I feel like I was hit with a physical blow. The rest of it seems like a blur.”

This comes from Jan Williams, whose son and grandsons were killed last summer at their home in Rowland Heights. Manling Williams, wife and mother of the victims, is awaiting trial for slayings, and could face the death penalty. Here’s Jan’s commentary:

END_OF_DOCUMENT_TOKEN_TO_BE_REPLACED

Jan Williams, whose son and grandsons were killed last August at their home in Rowland Heights, will be participating in a rally supporting Marcy’s Law, described as a bill of rights for victims of violent crimes. The press conference will take place outside the condo where Neal, Devon and Ian were slain. Here’s the top of the press release:

As children prepare to go house to house “trick or treating” on Halloween Friday, a Los Angeles man will be traveling across Los Angeles and Orange County from murder scene to murder scene. He will not be gathering candy, but stories of murder. The man is a local criminal prosecutor who worked with Broadcom billionaire Henry Nicholas to give victims rights by co-writing Prop 9, the “Victims Bill of Rights”. The prosecutor, a local Deputy District Attorney, “Marsy’s Law” in memory of Nicholas’s murdered sister, is on the November 4, 2008 ballot.

Press Conferences/ “Yes on Prop. 9” Tour of Murder Scenes (Oct. 29, 30, 31)
Over the three day period there will be a series of press conferences featuring the prosecutor who wrote Marsy’s law and the victims stories that inspired the changes in the law. Family members of murdered victims will tell not only the story of the murder, but the story of how they were re-victimized by the criminal justice system. The pilgrimage will begin on Wednesday October 29, 2008 in Malibu at the scene of 20 year old Marsy’s brutal shotgun murder and end in Orange County, with victims right leaders who inspired the writing of Prop 9. 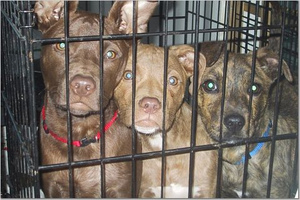 Deputy Donald Naslund was flagged down this morning by a citizen who found six newborn puppies.
The still-wet puppies were behind a Dumpster at the 76 gas station at Fullerton and Colima roads in Rowland Heights, according to Sgt. Thomas Wilson.
Naslund brought the little furballs to the sheriff’s Industry Station
at 150 Hudson Ave. in Industry.
“They’re being cleaned and fed by the jailer,” Wilson said.