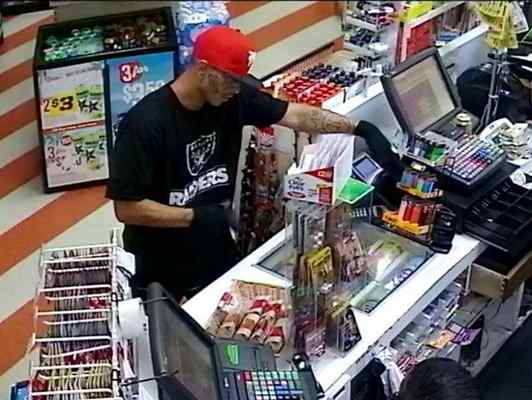 SANTA FE SPRINGS >> A tipster helped police capture a man in Santa Fe Springs on Thursday who they have been seeking in connection with two robberies at the same Whittier convenience store, as well as a failed robbery at a Whittier jewelry store last month, officials said.
Officers found and arrested Esteban Manuel Garcia, 23, about 4:45 p.m. at a Starbucks coffee shop, 13248 Imperial Highway, Whittier police Lt. Steve Dean said.
Police were tipped off by a witness who recognized the suspect from surveillance camera images from the crimes released by police and circulate in the media, according to the lieutenant.
Though they didn’t know his name until Thursday, deputies had been seeking Garcia for a month.
He is suspected of holding up employees of a Whittier ampm store at Lambert Road and Greeneleaf Avenue on May 24.
The robber pulled a gun on the clerk and fled with about $200, Dean said.
The same tattoo-faced robber then reappeared exactly one week later on May 31, Dean said. He displayed a handgun and demanded money from a worker at a jewelry store in the 13500 block of Whittier Blvd.
But the worker refused, and the robber fled empty-handed.
The same armed man then returned to the ampm store robbed a week before about two hours after the failed jewelry store heist and held it up once more, Dean said. He escaped with about $250.
Garcia was taken into custody without a struggle, Dean said.
According to Los Angeles County booking records, Garcia was being held in lieu of $105,000 bail pending his initial court appearance. 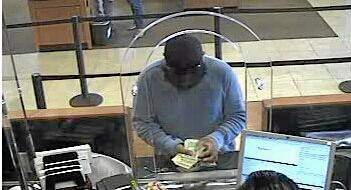 SOUTH PASADENA >> Police arrested a fake-bearded serial bank robbery suspect known as the “Bluto Bandit” Thursday following a failed heist in South Pasadena, which officials alleged was the seventh crime in his multi-county crime spree.
San Marino police chased down and arrested Joseph Adel Noriega, 37, of Rancho Cucamonga following the 12:30 p.m. failed bank robbery in South Pasadena, according to San Marino police Sgt. Timothy Tebbetts.
“The suspect was wanted by the FBI for at least six prior bank robberies and attempted robberies throughout Los Angeles and San Bernardino counties,” he said.
South Pasadena police first responded to Chase bank, 1305 Fair Oaks Ave., after the robber arrived and passed a teller a note demanding cash, South Pasadena police Cpl. Shannon Robledo said.
“For unknown reasons, the suspect fled the bank without receiving money, leaving behind the demand note. A bank employee saw the suspect get into a white four 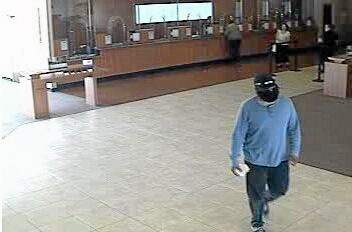 door sedan and flee Southbound on Fair Oaks Avenue,” Robledo said.
San Marino police spotted the suspect’s vehicle driving in the area of Huntington Drive and Bradbury Road, Tebbetts said. Noriega led police on a chase before eventually stopping at Mission Drive and Hackett Avenue in Rosemead, where he was taken into custody.
The Bluto Bandit earned his moniker, taken from the villain in the Popeye comic strip, due to the false beard he wore during his crimes, FBI spokeswoman Laura Eimiller said.
She described the Bluto Bandit as the “most prolific” serial bank robber currently operating in the Southland.
Previous robberies and incidents of suspect “casing” attributed to the bandit occurred in cities including Monrovia, Duarte, Unincorporated Pasadena, Ontario, Chino, Norco and Fontana
“(Noriega) was still wearing the fake black beard when he was arrested,” Robledo said.
Generally, the robber would target Chase banks branches and pass a note demanding cash to bank tellers, officials said.

The “Bluto Bandit” is pictured in this bank surveillance photo during a June 16, 2015, robbery at a Chase bank branch in Duarte. (Courtesy of the FBI.)