A man in a black baseball cap embarked on a two-county robbery spree in recent weeks, holding up or trying to hold up Citibank branches in Glendora, Arcadia and Placentia in recent weeks, authorities said. 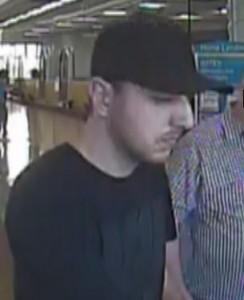 Glendora police released surveillance images of the robber Wednesday in hopes of generating tips from the public as to the mystery bandit’s identity. He’s robbed in both Los Angeles and Orange counties.
“We’re hoping someone recognized this person,” Glendora police Detective Russell Ziino said.
The robber first showed up about 4:50 p.m. on Feb. 29 at Citibank, 401 E. Arrow Highway in Glendora, police said.
“(He) handed the teller a demand note that stated he had a gun. No gun was seen,” Glendora police said in a written statement. “The teller handed him an undisclosed amount of money and the suspect left.”
The serial bandit again turned up about 12:40 p.m. on March 4 at a Citibank branch at 1300 N. Kraemer Blvd. in Placentia, police said. He handed a teller a similar note and fled with an undisclosed amount of money. 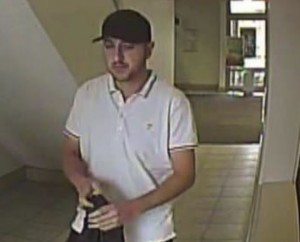 Just over four hours later, the same robber entered a Citibank branch at 100 S. First Ave. in Arcadia and attempted the same type of robbery.
“The teller in this case feared for his life and went to the back of the bank,” according to the police statement. “The suspect left with no cash.”
The notes presented by the robber were scribbled with messages to the effect of: “Don’t talk. I have a gun. Give me the money,” Ziino said. Though he always threatened to be armed, no gun has been seen during the crimes.
The yet-unnamed serial bandit is described as a white man, about 25 years old, 5 feet 10 inches tall, 130 pounds, with green eyes and a scar on his right eyelid.
In all three incidents, he wore a black baseball cap, Ziino added. No getaway car has been linked to the robber. 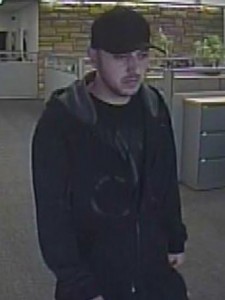