SOUTH EL MONTE >> Detectives cautioned the public and sought information after a man pulled a female jogger into some bushes and sexually assaulted her before she fought him off at the Whittier Narrows Recreation Area in South El Monte on Thursday afternoon.
The attack unfolded about 5:30 p.m. in the park, in the 500 block of Durfee Road, Deputy Ryan Rouzan of the Los Angeles County sheriff’s Information Bureau said in a written statement.
A woman was jogging when the man approached her from behind, Rouzan said.
“He pulled her into the bushes and sexually assaulted her,” he said. “The victim was able to fight the suspect off and escape. The suspect rode off on his bike toward Durfee Road and out of view.”
Deputies described the attacker as a Latino man between 20 and 30 years old, with light skin, about 5 feet 9 inches tall, 175 pounds, with a black fade haircut. He wore a black T-shirt and black sweatpants, and had a teardrop-shaped tattoo under his left eye.
Anyone with information is asked to contact the sheriff’s Special Victims Bureau at 877-710-5273. Tips may also be submitted anonymously online to L.A. Regional Crime Stoppers at 800-222-8477. 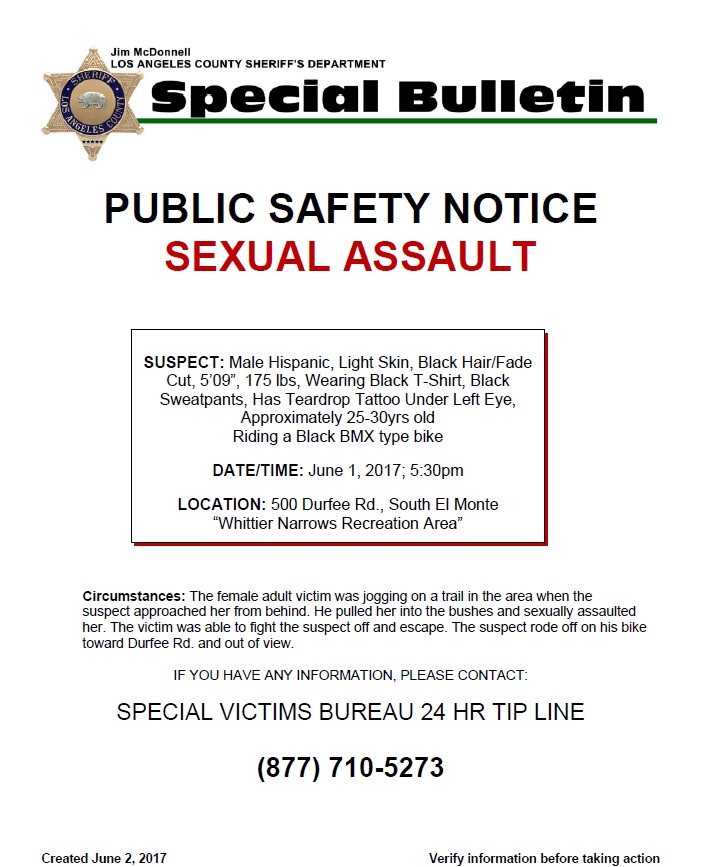 PASADENA >> An Azusa man admitted breaking into a Glendale woman’s home and sexually assaulting her at knifepoint before being chased away by her adult son in 2015, officials said.
Justin Amador Rios, 20, pleaded guilty Thursday in to one count of forcible sexual penetration in the Pasadena branch of Los Angeles County Superior Court, Los Angeles County District Attorney’s Office spokesman Ricardo Santiago said. Rios also admitted to a special allegation that he personally used a knife in the crime.
Rios did not know his victim prior to the crime, Santiago said. “It was a random attack.”
The attack took place on June 3, 2015, in the 900 block of Orange Grove Avenue, officials said.
“The defendant broke into the 38-year-old victim’s home and assaulted her at knifepoint,” Santiago said in a written statement. “When she managed to scream for help, her adult son woke up and stopped the attack.”
Glendale police found and arrested Rios in connection with the attack the following day.
Two additional counts of forcible oral copulation and one additional count of burglary were dismissed during Thursday’s hearing, which was the result of a negotiated plea arrangement, according to Santiago and court records.
Rios is expected to receive 24 years to life in state prison when he returns to court for sentencing on May 16, Santiago said.

NORWALK >> A sheriff’s task force arrested a Lakewood man and seized 13 guns while dismantling an alleged prostitution and human trafficking ring operating out of a Norwalk escort service last week, authorities announced Wednesday.
Omar Nicandro Sanchez, 37, is also accused of sexually assaulting at least one woman and one underage girl who worked for his illegal escort business, “Bombshells,” which operated out of an office at Studebaker and Leffingwell roads in Norwalk according to California High Patrol Investigator Kerri Rivas of the L.A. Regional Human Trafficking Task Force, who served as the lead investigator on the case.
The multi-agency task force arrested him Friday at the business, she said. He was released from custody two days later after posting $420,000 bail pending his initial court appearance, scheduled April 28 in the Norwalk branch of Los Angeles County Superior Court.
In a written statement, sheriff’s officials described Bombshells as, “an illegal escort business, which supplied women for commercial sex to paying customers.”
Furthermore, “Mr. Sanchez victimized some of the women who worked at the agency and sold their sexual services for money,” Rivas said.
At least one of the sexual assault victims was a juvenile, she said.
The purported Escort service was believed to have been operating in Norwalk for two to three years, Rivas said. It used vague advertisement on websites such as Backpage.com to solicit Johns.
The investigation was ongoing, and investigators were still working to determined exactly how many victims were involved.
Sanchez faces expected charges of human trafficking related to the underage victim, as well as pimping and pandering charges in connection with the adults, Rivas said. He also faces potential charges of rape and sexual assault of a minor.
Additionally, Sanchez is expected to face numerous weapon-related charges after investigator seized 13 guns, including several AR-15 and AK-47-style weapons. “Because of a previous felony conviction, Sanchez is prohibited from possessing firearms,” according to the sheriff’s department statement.
The cache of weapons was seized from Sanchez’s home, vehicle and a storage unit he had rented, Rivas said.
Investigators also seized cash believed to be proceeds from the illicit operation, officials said.
The bust was the culmination of a six-month-long investigation that began when some of the victims came forward, Rivas said.
Investigators are seeking any potential additional victims of Sanchez or his operation, she said. Anyone with information can reach the L.A. Regional Human Trafficking Task Force at 323-526-5156. Tips may also be submitted anonymously online to L.A. Regional Crime Stoppers at 800-222-8477.

PASADENA >> A man tried to force himself on a young woman by threatening to falsely report her for drunken driving Saturday before the woman flagged down a passing police officer, who arrested the suspect, authorities said.
Dishaun Alboulatifoy, 37, of Pasadena is accused of attempted sexual assault in connection with the failed crime, which took place about 3:10 a.m. in the 200 block of East Orange Grove Boulevard, Pasadena police Lt. Jesse Carrillo said.
The victim, a woman in her late-teens, was sitting in the driver seat of a car as she waited for her boyfriend, Carrillo said.
Alboulatifoy, who was believed to be drunk, reached through a partially opened passenger-side window to unlock and open the door, the lieutenant said. The suspect got into the passenger seat and told the woman if she did not provide him with a sexual favor, he would call the police and report she was a drunken driver.
Fortunately, Carrillo said, a police car happened by and the woman flagged the officer down and explained what had happened. Police arrested Alboulatifoy. The woman was not intoxicated.

From City News Service: One of the men suspected of sexually assaulting at least 10 severely disabled women depicted on a videotape sent anonymously to authorities is in custody, according to the Los Angeles County Sheriff’s Department.

ABC says another suspect has been identified.

Here’s the video that basically tells the whole story:

Pomona cops are investigating — and the alleged pervert has been placed on unpaid leave as of this afternoon, offiicials said.
Here’s Tom Himes’ story on the assault:

POMONA — The owner of a Pomona bakery says a Los Angeles County health inspector sexually assaulted her during a compliance check late last month in an ordeal captured by surveillance cameras.

The woman says health inspector Magdy Tawadros used his county position and the guise of a health inspection to intimidate and grope her in a back room of her business on March 24.

“I didn’t know what to do,” said the 45-year-old woman, whose name and place of business are withheld to protect her identity. “I was afraid I would get a bad grade on the inspection. I felt helpless.”

The woman filed a claim for damage with Los Angeles County on April 1 seeking up to $10 million in damages.