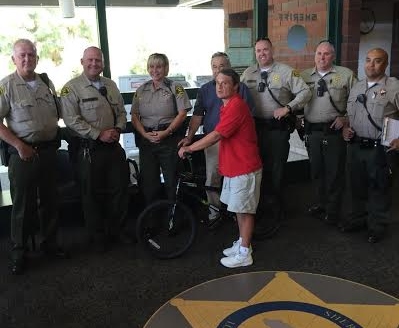 SAN DIMAS >> Joel “Joey” Gutierrez has been riding the same bicycle through the streets of San Dimas every day for 20 years.
Each morning, he dons his headphones, sings his favorite songs and goes for a ride around the neighborhood, Los Angeles County sheriff’s Lt. Andy Berg said.
“Riding his bike and singing is his daily routine and it brings him great joy,” Berg said of Gutierrez, 41, who has Down Syndrome. “The victim is well liked by everyone in the neighborhood.
So when two opportunistic thieves stole Gutierrez’s black and white BMX-style bicycle from his garage in the 1000 block of Sherwood Court about 10 a.m. Saturday following his daily ride, that didn’t sit well with the deputy who took the report, or his colleagues.
“Once the handling deputy realized the significance of the stolen bike, he and his
patrol partners from San Dimas Station jumped into action,” Berg said. “Within two hours deputies pooled their money, contacted Incycle (Bicycles), San Dimas, and purchased a new bike.”
Deputies cheerfully presented the new bike to Gutierrez and his father Saturday afternoon in the lobby of the sheriff’s station.
Neighbors reported seeing two male thieves leave Gutierrez garage with his bike and flee the neighborhood in a newer-model, white car.
Anyone with information can reach the sheriff’s San Dimas Station at 909-450-2700. 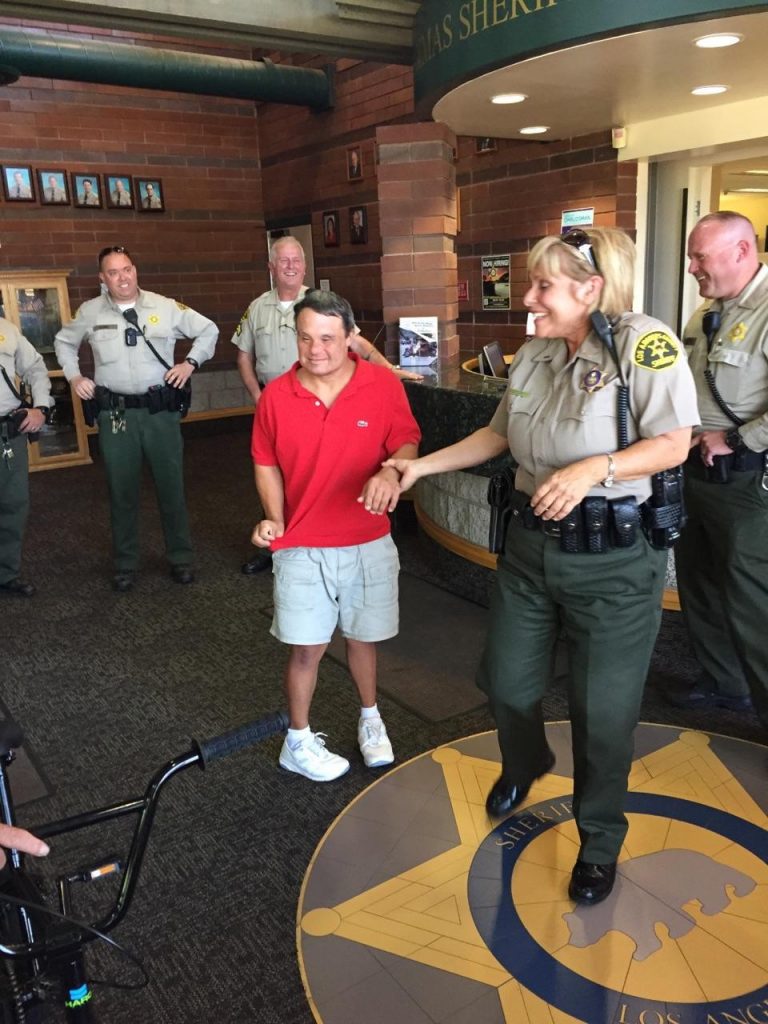 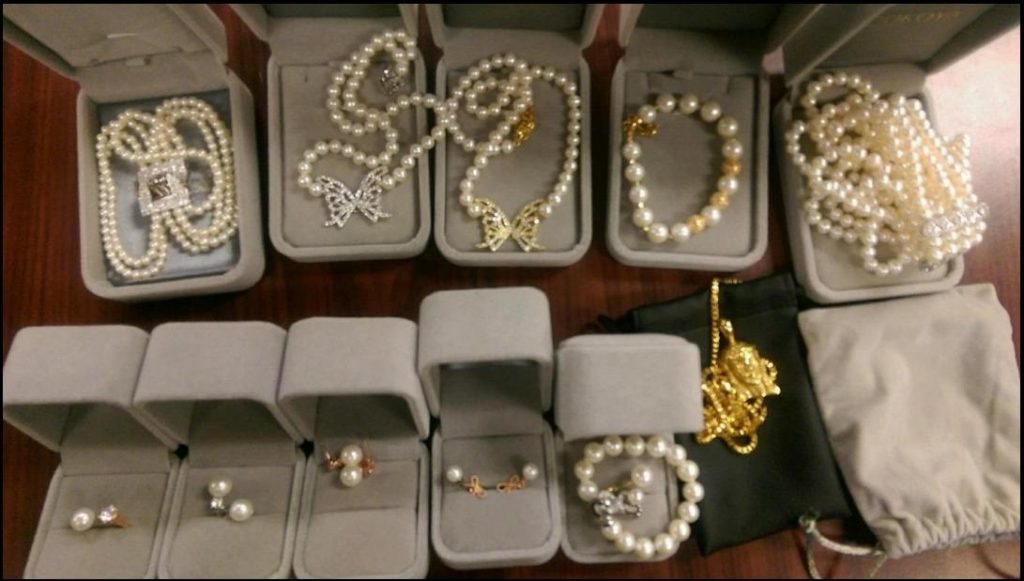 DIAMOND BAR >> Investigators are seeking the rightful owner of a set of allegedly stolen pearl jewelry recovered from a suspect in Diamond Bar Thursday afternoon
The jewelry was discovered, along with other suspected stolen property, inside a man’s car as it was being towed in Diamond Bar about 1 p.m., Los Angeles County sheriff’s Sgt. Byron Ward said.
Investigators were able to identify the owners of some of the items, but could not track down the owners of a set of 11 pearl necklaces, bracelets and earrings, Ward said. The off-white jewelry boxes were each marked with the manufacturer name, “Jakoya,” in the inner, upper portions.
Anyone who recognizes the recovered jewelry is asked to contact the sheriff’s Walnut-Diamond Bar Station at 909-595-2264.

SAN MARINO >> A report of suspicious activity from a San Marino resident Friday afternoon led police to arrest three people — including a mother and son — caught sitting in a stolen car with stolen mail, stolen and altered financial documents and burglary tools, police said.
Dillon Richard Parks, 20, his mother Renee Eileen Parks, 51, and Jeannifer Marie Espinoza, 23, were arrested shortly after noon in the 1400 block of San Gabriel Boulevard, San Marino police Detective Brian Wong said in a written statement.
A witness called police to report seeing a “suspicious vehicle” parked in the driveway of a home, Wong said. All were described as Rosemead residents.
“Officers quickly arrived on scene and observed a white passenger van parked in the driveway, the detective said. “All three occupants were ordered out of the vehicle and later taken into custody without incident.”
Police determined the suspects had no reason to be on the property, he said. “The vehicle was previously reported stolen out of Pasadena.”
A search of the vehicle turned up stolen mail, stolen and altered checks and credit cards and burglary tools.
Officer arrested Dillon Parks on suspicion of auto theft, theft of identity information, possession of burglary tools and trespassing, Wong said. Dillon Parks, who has two warrants for auto theft, was being held without bail.
Renee Parks was booked on suspicion of receiving stolen property, possession of burglary tools and trespassing, while Espinoza is accused of receiving stolen property and trespassing, officials said. Renee Parks and Espinoza were being held in lieu of $20,000 bail each pending their initial court appearances, records show.

ARCADIA >> A liquor-loving man and woman carried out a beer run in Arcadia Saturday before crashing their car nearby and continuing to flee on foot, police said.
The incident began about 5:30 with a report of an alcohol theft from Royal Oaks Liquors, 511 N. 1st Ave., Arcadia police Lt. Tom Cullen said.
A man and woman took various alcoholic beverages from the store without paying, then fled in a silver Nissan Altima, the lieutenant said.
Within minutes, police received word of a hit-and-run collision a block to the west at Colorado Boulevard and Santa Anita Avenue, he said.
A silver Nissan believed to be the same one involved in the liquor store theft struck another vehicle, Cullen said. No injuries were reported.
“While attempting to flee the scene of the initial collision, the suspects were involved in a second collision just north of the intersection,” he said. Their car struck a chain that was hung across a private parking lot.
“The suspects abandoned the vehicle and fled the area,” Cullen said. Officers searched the area, but did not find them.
Police described one of the thieves as a Latino man in his 20s, about 5 feet 7 inches tall, of medium build, with a shaved head. He wore shorts.
He was accompanies by a Latina woman between 18 and 20, about 5 feet 8 inches tall, 130 pounds, with hair dyed red and pulled back. She wore painted-on red eyelashes, a black T-shirt and burgundy pants.
Anyone with information is asked to contact Arcadia police at 626-574-5150. Tips may also be submitted anonymously to L.A. Regional Crime Stoppers at 800-222-8477.

ALHAMBRA >> One day after a viral cell phone video of an Alhambra man confronting a female package thief in front of his home made the suspect an overnight celebrity, police arrested the woman Friday afternoon, officials said.
Rianna Medina, 20, of Montebello was booked on suspicion of grand theft — a felony — after officers found her about 1 p.m. at a motel in Rosemead, according to Alhambra police Sgt. Jerry Johnson.
“The woman seen in the now-viral video stealing packages from the front porch of an Alhambra home last Tuesday has been arrested.
•Video: Alhambra resident confronts package thief 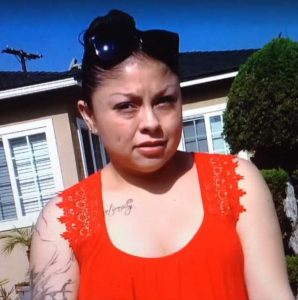 The arrest was the result of “tips and social media messages and using what can only be described as ‘old-fashion police work,’ the sergeant said. “She was taken into custody without incident.”
Medina is accused of a package theft caught on camera Tuesday when the resident arrived home in the middle of the crime and confronted the suspect with a cell phone camera in-hand.
The video, which was released by police in hopes of generating clues, quickly spread across the nation via the internet.
“If I was you, I’d put those down,” the homeowner tells the woman, who tried to argue that her mother lived at the home, not the resdient.
But the woman dropped the packaged and walked away immediately once the man told her he was calling the police. 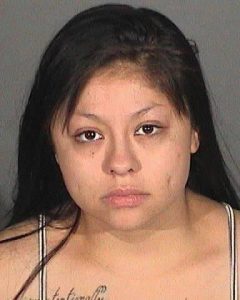 Police thanked those who called in tips or provided information via social media, Johnson said.
“The public’s cooperation greatly assisted our detectives in identifying and locating this suspect,” he said. “It is often times difficult to find people who are willing to come forward and share information. We appreciate everyone’s contribution.”

INDUSTRY >> Detectives are asking the public’s help in tracking down two men they say stole about $10,000 worth of gold rings from a Jewelry shop inside the Puente Hills Mall shop on St. Patrick’s Day earlier this month.
The crime took place about 4:15 p.m. on march 17 at C & L Jewelry Repair, inside the Puente Hills Mall at 1600 Azusa Avenue, Los Angeles County sheriff’s Detective Anthony Peraita said. 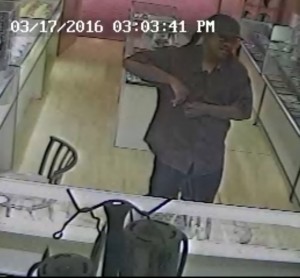 One of the two suspect jimmied open the display case with some type of small tool, the detective said. The second suspect tried to keep the store owner distracted as the first suspect prepared to steal the 18 gold rings, some of which contained diamonds, which were valued at about $10,000.
“Suspect No. 1 asked the owner of he could so some cleaning of his personal jewelry,” Peraita said.
“And while (the owner was) doing so, the suspect proceeded to test the display case glass with a pry tool or a coin to see if it would lift up,” the detective said.
Meanwhile, a second suspect entered the store and tried to distract the store owner as the first suspect continued working to pry open the jewelry display case, Peraita said.
The accomplice eventually left the store, and the first suspect asks the owner to clean another piece of jewelry, Peraita said.
“While the owner was in the back of the store, he actually lifted the display case and stole an allotment of jewelry from the store. He then proceeded to put the stolen goods down the front of his pants and exited the store, into the interior of the mall,” he said. 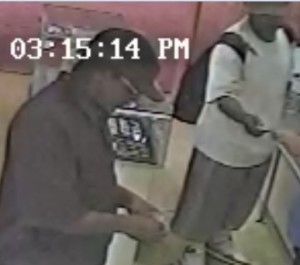 Investigators described the first suspect as a black man between 25 and 30 years old, with black hair with two thick braids, wearing a black or brown button-up shirt and black or dark-colored jeans.
His accomplice was also a black man between 35 and 40, wearing a white T-shirt, a tan hat, tan short and black backpack.
Anyone with information can reach the sheriff’s Industry Station at 626-33-3322. Tips may also be submitted anonymously to L.A. Regional Crime Stoppers at 800-222-8477.

*Surveillance video courtesy of the LASD.

END_OF_DOCUMENT_TOKEN_TO_BE_REPLACED

PASADENA >> Police in Pasadena jailed an identity theft suspect from San Bernardino Thursday after the woman tried to order an Uber ride with a stolen cell phone, authorities said.
The series of event began about 10:30 a.m. when the woman tried to rent a car using a fraudulent credit card and ID at Hertz rentals, 2070 E. Colorado Blvd., Pasadena police Lt. John Luna said.
The woman ran from the business after being confronted about the attempted fraud by an employee and another customer, the lieutenant said.
She was accompanied by two men as she fled, Luna said. Hertz employees notified police.
Responding officers soon found the two male suspects walking in the area and arrested them, Luna said. The female suspect eluded police, but not for long.
Representatives from the ride-sharing mobile app Uber notified police later in the afternoon that someone was trying to order a ride using a smartphone that had been reported stolen, Luna said.
“Officers responded to the pickup location,” he said. There, at Colorado and San Gabriel boulevards, police encountered the same woman who had fled following the earlier incident less than a mile away at Hertz.
Vanessa Wilson, 23, of San Bernardino was booked on suspicion of identity theft, along with Justin Ryan Kimbro, 25, and Anthony Vincent Flores, 22, both of Loma Linda, according to Pasadena police officials and Los Angeles County booking records.
Wilson and Kimbro were being held in lieu of $50,000 bail each pending their initial court appearances, records show. Flores was being held in lieu of $80,000 bail, records show.

WHITTIER >> In an effort to combat the issue all-too-common crime of bicycle theft, police arrested to alleged thieves who tried to pedal away on bait bicycles left in front of Whittier convenience stores Thursday as part of a sting operation, officials said.
A teenage boy and a man were each arrested without a struggle after they hopped on the seemingly unattended bikes and began riding off, Whittier police Lt. Jay Tatman said.
The first arrest took place about 11:40 a.m. at Circle K, at Beverly Boulevard and Pickering Avenue, Whittier police Lt. Jay Tatman said. The suspect was described as a teenage Whittier boy.
Police arrested a second suspect in the same manner about 4:50 p.m. in front of a 7-Eleven, 12515 Philadelphia Street, the lieutenant said. Arrested was Joseph Martin, 24, of Whittier.
Both suspects were booked on suspicion of possession of stolen property, Tatman said. Martin was released from custody after posting $1,000 bail, records show.

COVINA >> Police are seeking a 50-pound tortoise stolen from a Covina backyard Friday.
The pet reptile — valued at about $450 — was reported missing about 9 p.m. in the 1500 block of East Adams Park Drive, Covina police Lt. Ric Walczak said.
Its owner arrived home to find the side gate leading to the backyard open and the tortoise gone, officials said.