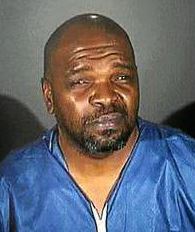 PASADENA >> A Pasadena man who fatally shot his ex-girlfriend, her father and a neighbor who tried to help, then opened fire on a responding police officer, during a 2014 assault weapon rampage will spend the rest of his life in prison after receiving a sentence of nearly two centuries in state prison on Wednesday, authorities said.
John Izeal Smith, 46, received a sentence of 181 years to life in state prison in the Burbank branch of Los Angeles County Superior Court, in connection with the Jan. 12, 2014, triple-murder in the 1700 block of North Summit Avenue, Los Angeles County District Attorney’s Office spokesman Greg Risling said.
The sentence was agreed upon under a plea arrangement reached in December, when Smith pleaded guilty to two counts of first-degree murder and one count of second degree murder, as well as charges of attempted murder and assault with an assault weapon on a police officer.
Killed in the AK-47 shooting spree were Smith’s ex-girlfriend, 59-year-old Maria Aguiar, with whom he still lived; her 91-year-old father Luis Aguiar; and 31-year-old neighbor 31-year-old Jose Hernandez Iribe, according to Los Angeles County coroner and Pasadena police officials.
“Smith got into a domestic altercation with (Aguiar), grabbed an assault rifle and opened fire,” district attorney’s officials said in a written statement. “Aguiar was killed along with her elderly father.”
Smith then fatally shot Iribe as he rushed toward the gunfire to help Maria Aguiar as she lied wounded in the sidewalk, according to Pasadena police.
Smith then barricaded himself inside the home and called 911 to report the shooting.
He opened fire on the first officer to arrive at the scene, Officer John Woo, who took cover behind his patrol SUV to escape the barrage of gunfire, officials said. Fellow officers used an armored vehicle to rescue Woo from the line of fire.
More than 40 rounds were fired by Smith during the rampage.
Two other people were treated for non-life-threatening injuries following the incident, officials said.
The special circumstance of multiple murders could have made Smith eligible for the death penalty, however prosecutors chose not to seek capital punishment for the crimes.

An Upland man was arrested in connection with the Monday morning slaying of three in Ontario. This from the Inland Valley Daily Bulletin.

Steven David James Carter, 34, was booked into West Valley Detention Center in Rancho Cucamonga. Court records show he is scheduled to appear in court Wednesday, although it is unclear if he has been charged in the case.

Officers said they plan to recommend to the San Bernardino County District Attorney’s Office that Carter be charged with three counts of murder.

Police investigated the triple homicide Monday after receiving a report of an unconscious man lying in the driveway.
The man was dead of what investigators suspect was a gunshot wound. Police found two more bodies inside the home, but are unsure about their cause of death.

Officers identified one of the men in the house as Brandon Perez, 31, of Ontario. He resided in the home and appeared to be the target of the robbery, police said. The other man in the residence, one of Carter’s accomplices, was 25-year-old Albert Lamar Thomas of Ontario.

Police withheld the name of the third man because his relatives have not been notified.