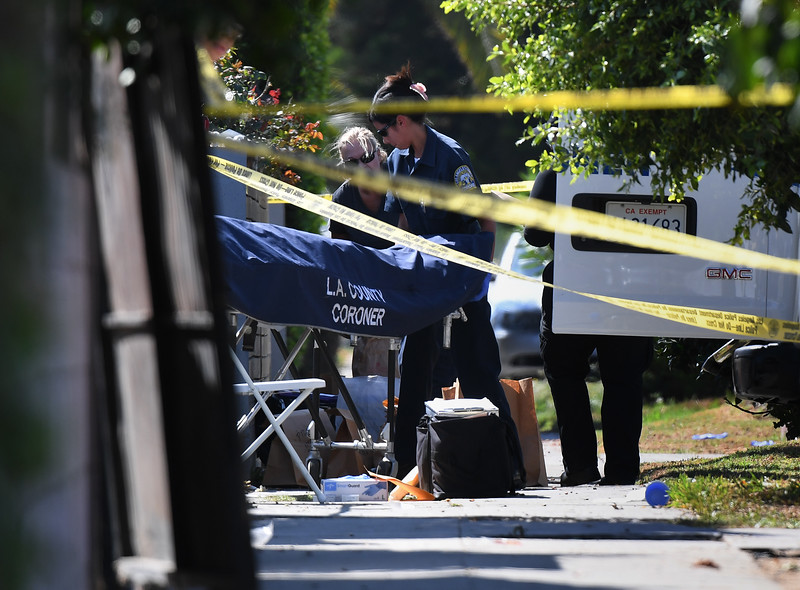 A body is removed by the Los Angeles County coroner staff after three people were killed during a shooting after a dispute at a pop-up Jamaican restaurant in Los Angeles on October 15, 2016 Three people were killed and at least a dozen more injured, police said Saturday. One person has been arrested and police have launched a manhunt for another in connection with the deadly incident in West Adams, in the southwestern part of the metro area, said spokesman Lieutenant Chuck Springer. / AFP / Mark RALSTON (Photo credit should read MARK RALSTON/AFP/Getty Images)

Police on Sunday announced the arrests of two in connection with a shoot-out at a home operating as a makeshift Jamaican restaurant that left three people dead and 12 others wounded in the West Adams neighborhood of Los Angeles early Saturday.
Mowayne McKay, 33, and Deigo Reid, 25, both Jamaican nationals, were booked on suspicion of murder Saturday morning, according to Los Angeles Police Department officials and Los Angeles County booking records.
They’re accused of being involved in Saturday’s 12:30 a.m. shooting that sent a barrage of bullets flying through the crowded home in the 2900 block of Rimpau Street, striking 15 people in all, LAPD officials said in a written statement.
Both McKay and Reid were initially arrested in the hours immediately following the shooting, but were not formally booked until Sunday morning, records show.
Information regarding the suspects’ specific alleged roles in the complex shooting were unclear, and information regarding where and how they were arrested was not available.
The identities of the three people who died in the shooting were not released Sunday pending notification of their families, Los Angeles County Department of Medical Examiner-Coroner officials said.
About 50 people were at the makeshift restaurant prior to the gunfire, officials said.
“A dispute broke out between one male individual and at least two other males, one of whom produced a handgun and shot the male individual,” according to the LAPD statement.
“Immediately following the shooting of this one individual, several other shots were fired indiscriminately in the crowd, including some that appeared to be ‘return’ fire from other party-goers in the direction of the suspects,” the statement said. “The initial shooter and at least one other associate, who is also believed to have fired in the crowd, fled the scene on foot.”
Nine men and six women were wounded. Los Angeles Fire Department paramedics pronounced three of the victims dead at the scene.
The injuries suffered by the 12 survivors ranged from minor to severe, police said.
“Currently, one male victim is in extremely critical condition, while most of the other victims have been released from their local hospitals,” the statement said.
Anyone with information is asked to contact LAPS Criminal Gang Homicide detectives David Dilkes or Isidro Soto at 323-786-5110. During non-business hours or weekends, the LAPD can be reached at 877-527-3247. Tips may also be submitted anonymously to L.A. Regional Crime Stoppers at 800-222-8477.