Here’s at least one thing for the new coach to look forward to.

All I know is that one of the candidates isn’t from this area and the other one may or may not be.

How’s that for reporting?

Believe me, I’m digging as best I can, but it ain’t easy with Robledo on a yacht somewhere and me having to help Steve Ramirez steer the ship thru the state playoffs in soccer and hoops.

If any of you with intimate knowledge of the situation want to take a stab, please be my guest. 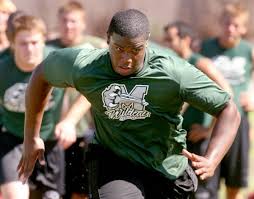 Monrovia High School defensive line standout Ellis McCarthy, who figures to be the most coveted college recruit in the Valley next season, has been chosen to play in the U.S. Army All-American Bowl next season.

The game will be played in early January of 2012 and feature top high school seniors from around the country.

Aram’s take: Just another in a long line of accolades heading McCarthy’s way over the next year.

Go to From the Sidelines to get the info.

He succeeds Jim Arellanes, who last month was let go after one season at the Hacienda Heights school.

Ziola, the fourth coach at Los Altos since Conqueror legend Dwayne DeSpain retired following the 1996 season, is a former player at Whittier College.

His coaching tenure began at Montebello, where he was an assistant from 2004-09 before moving over to Los Altos last season, where he coached running backs.

Ziola was also a finalist when Arellanes, who came over from Northview, was hired prior to last season.

The Conquerors’ program has been on a downward spiral the past few years, winning just four games since 2007.

Former area player of the year Felipe Aguilar, who followed Greg Gano prior to the 2008 season, went 1-9 and 3-7 before resigning. Arellanes followed, and went 0-10 this past fall.

Aram’s take: This one caught me surprise, as Los Altos obviously moved very quickly to replace Arellanes. Did LA fly the position? Did it conduct interviews? How did LA make a hire so quickly while Wilson is still deep in the process of finding its new coach, which is a vacancy that came about earlier than Los Altos’ did. Anyway, don’t know much about Coach Ziola. I will find out more …