Former Tribune Player of the Year and former Los Altos head coach Felipe Aguilar has left Arroyo where he was an assistant coach on Jim Singiser’s varsity football staff and will return to Rowland.

Aguilar was an assistant coach under Craig Snyder at Rowland in 2010, but left shortly after the season to accept a history teaching job at Arroyo and a spot on Singiser’s staff. Aguilar was head coach at Los Altos for two years, going 4-16, before resigning after the 2009 season. Aguilar also coached baseball at Arroyo.

“I appreciate the role Felipe served within our baseball program and wish him the best in the future,” said Singiser, who is also Arroyo boys AD. “As far as the impact on our football program? He had only been with us for 2 weeks because of baseball so he had just started to get to know our players and our system.”

Arroyo has replaced Aguilar on its staff with former standout quarterback Dominic Salmon.

Aram’s take: Felipe needs to settle down. That’s a lot of schools in a short amount of time. I had heard that Aguilar was being groomed to be Snyder’s successor when the veteran coach decides to turn over the Rowland football program. Maybe that plan is back on now. Who knows.

Bishop Amat, Cathedral, Loyola and others all reportedly tried, but West Covina ended up hitting the jackpot by landing Antonio “Noodles” Hull as part of its freshman class. Hull, who you’ll see in this video as a member of the Compton Vikings JAA team, has moved to West Covina with his family and will likely land himself a spot on the Bulldogs varsity team this fall.

Aram’s take: Could West Covina’s program be doing any better? It’s on fire right now with talent. Anyway, I had heard buzz about West Covina’s freshman class (90-something players with some goodies in the group), not that Noodles will be a part of it anyway. He’ll be playing under the lights. Look at the kid’s highlight film! It’s not like he’s running away from slow kids. It looks like he’s out there against other athletes and HE’S ON ANOTHER LEVEL. Looks like the Valley could have a VERY SPECIAL PLAYER to watch for the next four years. Can’t wait to see what Noodles can do!

After participating in a summer passing game last week as a member of Arcadia High School’s football team, De’Shawn Ramirez has decided to remain a Monrovia Wildcat after all.

Ramirez informed Monrovia of his decision during a meeting on Monday afternoon during which Monrovia principal Darvin Jackson decided to restore Ramirez’s eligibility to the Wildcats’ football program.

“We’re going to support the opportunity for him to represent Monrovia,” Jackson said. “As principal of the high school, because athletics are a privilege, I had to make the decision based on the facts that were before me.

“He (Ramirez) has met the terms of the agreement that were made last year and therefore we believe that young adults should be given another opportunity.”

Ramirez spent last week practicing with Arcadia and played running back, receiver and safety for the Apaches in a passing game while Monrovia was still in limbo about whether to restore his eligibility to play football. Ramirez spent last school year at Canyon Continuation High School after being expelled from Monrovia and kicked off the football team following an undisclosed disciplinary infraction at school.

Jackson issued a statement on Friday night saying that Ramirez and his family had the weekend to decide which school Ramirez wanted to attend this fall. Ramirez’s eligibility to return to the football program is effective immediately. Monrovia, like most other local teams, has just entered the busy summer passing circuit portion of its offseason schedule.

Ramirez rushed for 851 yards and 10 touchdowns at Monrovia as a sophomore in 2009. Even bigger things were expected of him entering his junior year, but he sat out while the Wildcats went 12-2 and won the CIF Mid-Valley Division championship.

Trouble found Ramirez again in May when he was stabbed in the neck during a fight at a house party in the 100 block of Montana Street, just west of Myrtle Avenue in Monrovia.

With Ramirez back and joining a team that returns several key starters, including heavily recruited defensive end Ellis McCarthy, the Wildcats figure to be favored to repeat as division champs. Based off his 2009 form, Ramirez is widely considered to be one of the top running backs in the area as well as a dangerous receiver and kick returner.

Since Monrovia was Ramirez’s last established school of athletic eligibility, the senior won’t have to sweat any eligibility issues with CIF.

Aram’s take: Absolutely the right decision by Jackson. Everybody makes mistakes as teenagers … some bigger than others. BUT, Ramirez would not be better off without football in his life. Much better for him to have the gridiron taking up most of his time than hanging with Baby Roc 3. Feel me? Anyway, for about a week it looked like Arcadia was building a case to be co-favored with West Covina in the Southeast Division. The Apaches were almost sitting up on a sick collection of skill players had Ramirez come over. They’re still darn good. As for Monrovia, well, bad news for the rest of the Mid-Valley. It seems to me that Covina is the only team in the division that can match the Wildcats in terms of skill players, and even that might be pushing it. If G5 is as good as they say at QB, then M-Town looks like a good bet to hoist another banner. 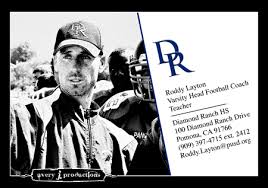 As many of you should know, I absolutely love getting Diamond Ranch coach Roddy Layton’s takes on all things football. He never holds back and that’s that.

Anyway, quite a few people have remarked to me that they haven’t heard much about D-Ranch on the blog so far this spring/summer. And I got to thinking that D-Ranch didn’t have any players who made the top 10 in my QB, RB or WR rankings and for some reason I hadn’t heard from Coach Layton when I usually would under such circumstances.

“We lost in the first round last year. It’s time to be quiet.”

“Out of respect for the family and at their requiest, I’m going to make a brief statement. De’Shawn Ramirez and his family will spend the weekend deciding on which school he wishes to attend.”

Aram’s take: Short and sweet. Jackson refused to answer any questions. You get what you get sometimes. We’ll see what happens, but it sounds like he has the option to play at Monrovia (just a guess from reading between the lines).