CIF has denied Diamond Bar High School football player Antonio “Noodles” Hull’s appeals bid and the junior standout will not be eligible to play for the Brahmas varsity football team until Nov. 16.

Hull, the Tribune’s Newcomer of the Year last fall, left West Covina in February and transferred to Diamond Bar. West Covina challenged the transfer on grounds that it was athletically motivated and presented the CIF-Southern Section with an email from Hull’s father as proof.

“I’ve never seen a high school go after a kid like this,” said Prussak, who will now discuss with Hull’s family whether a lawsuit will be filed. “It was like a girlfriend being dumped. The bottom line is that West Covina had an ax to grind with Mr. Hull. They put CIF on alert this transfer was happening way before it was done.

“Shame on West Covina High School when you have these adult coaches going after a child like this.”

Hull made a splash when he arrived at West Covina for his freshman year. A former standout in the Snoop Youth Football League, Hull had many suitors before he enrolled at West Covina to start his career.

As a freshman, Hull starred on the freshmen team before being called up to the varsity team after turning 14-years-old. Hull saw limited action, but by his sophomore season he was one of the top players on the team.

Hull bounced between quarterback and running back on offense last season, and also started at safety on defense. His big performances in wins over Paramount and Muir helped West Covina advance to the semifinals of the Southeast Division playoffs.

Hull was declared ineligible by CIF and lost his first appeal before his parents hired Prussak to represent their son before the executive committee.

According to Prussak, attorneys representing CIF and the moderator were present at the appeals hearing, a maneuver he had not seen when arguing eligibility cases in the past.

“I just felt it was an unfair, unfortunate and intimidating environment for a child to be in,” Prussak said. “I respect CIF’s decision. They have a very tough job trying to interpret these rules.

“We did the best we could. We definitely laid down our facts, our case and our soul for CIF and explained to them why the transfer was necessary.”

With his all-important junior season in terms of college recruiting now lost, Hull can either play at the junior varsity or begin getting ready for his senior season.

“Our focus now is to get his grades to keep improving and get him into a four-year college with or without football,” Diamond Bar head coach Ryan Maine said. “He is a great kid on our team and an unselfish leader.

“I will promise that Antonio will be taken care of here.”

Hull has been practicing with the Brahmas and participating in summer passing games. Diamond Bar’s regular season ends Nov. 8 against Walnut, thus making Hull ineligible to play until the second round of the Southeast Division playoffs … if the Brahmas get that far.

San Dimas, which originally said it would not challenge running back Jake Payton’s transfer to Upland, has had a change of heart and will dispute the senior standout’s move to Upland on grounds of athletic motivation and undue influence.

“We had a change of heart, it’s a group decision,” Saints football coach Bill Zernickow said. “My opinion is that you can’t say nothing if something happened.”

Payton was a Tribune All-Area running back and Valle Vista League MVP last season after rushing for 1,628 yards and 22 touchdowns as a junior. Payton left San Dimas for Upland at the end of the school year and has been participating in summer practices and passing competitions with the Scots.

Payton is expected to be Upland’s featured back this season.

Aram’s take: This just got real interesting. Now San Dimas will have to show there was athletic motivation and/or undue influence. How they go about doing that, I don’t know. Payton also has to be ready to prove that there wasn’t. Stay tuned … 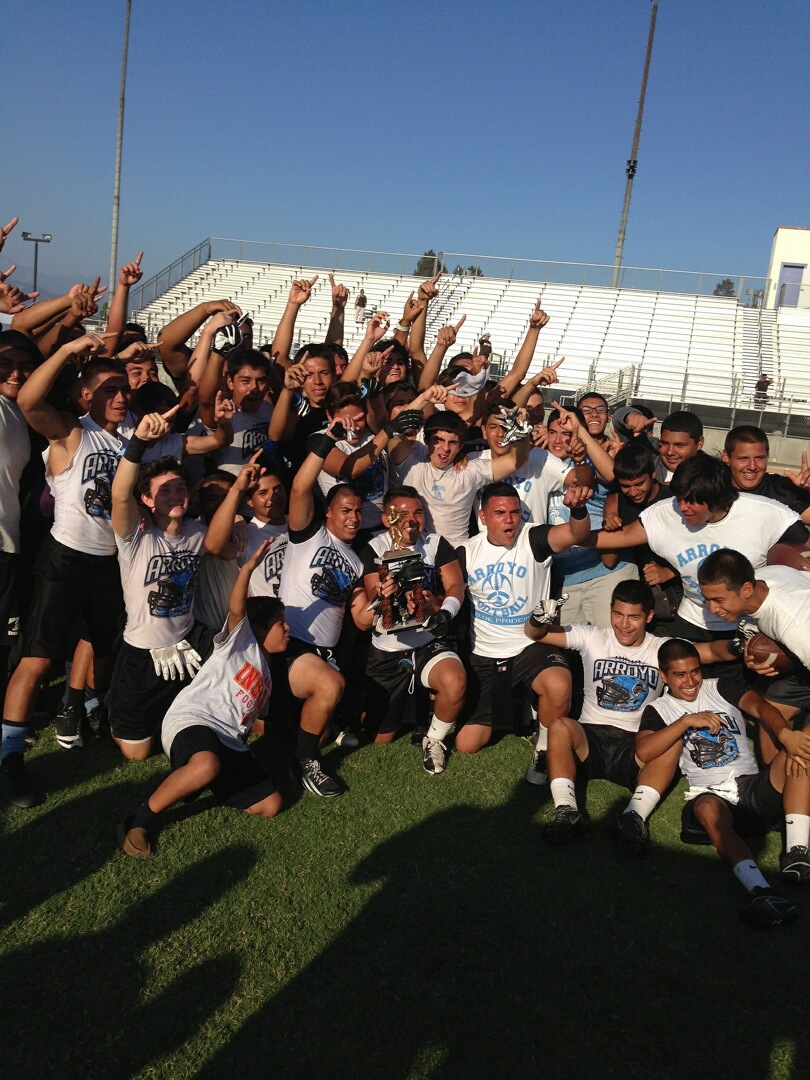 The Knights were led by quarterback Nathan Coto, who is a returning starter and has looked very solid this offseason after some growing pains in 2012.

“It means that we have a really good team on July 13,” Arroyo coach Jim Singiser said of the win. “That’s all it means. We can throw the ball better than we could last year. The biggest thing I took away from this is that I think our guys are in really good shape. Talent-wise, I don’t think we’re a final-four team. But we just didn’t drop off. We just kept making plays and were able to dig in.”

In addition to Coto, Singiser cited the strong play of receivers Nico Lozano, Jose Valdivia and David Cotero. He also liked what he saw from linebacker Jesus Calvillo.

Arroyo averaged 35 points per game on offense on Saturday, according to Singiser. The Knights beat Crescenta Valley in the semifinals. Diamond Bar beat Monrovia in the other semifinal.

“This is great for the kids and the parents, but for me and our staff it’s way more about putting on the tournament than coaching the tournament,” Singiser said. “It’s not so much about coaching, but making sure the other 23 teams got what they paid for.”

Diamond Bar was playing without star receiver/safety Cordell Broadus, who was away due to a death in his family. Antonio “Noodles” Hull was in action for the Brahmas, however.

Aram’s take: Arroyo looked like a solid favorite to win the Mission Valley League and today only reinforces that. 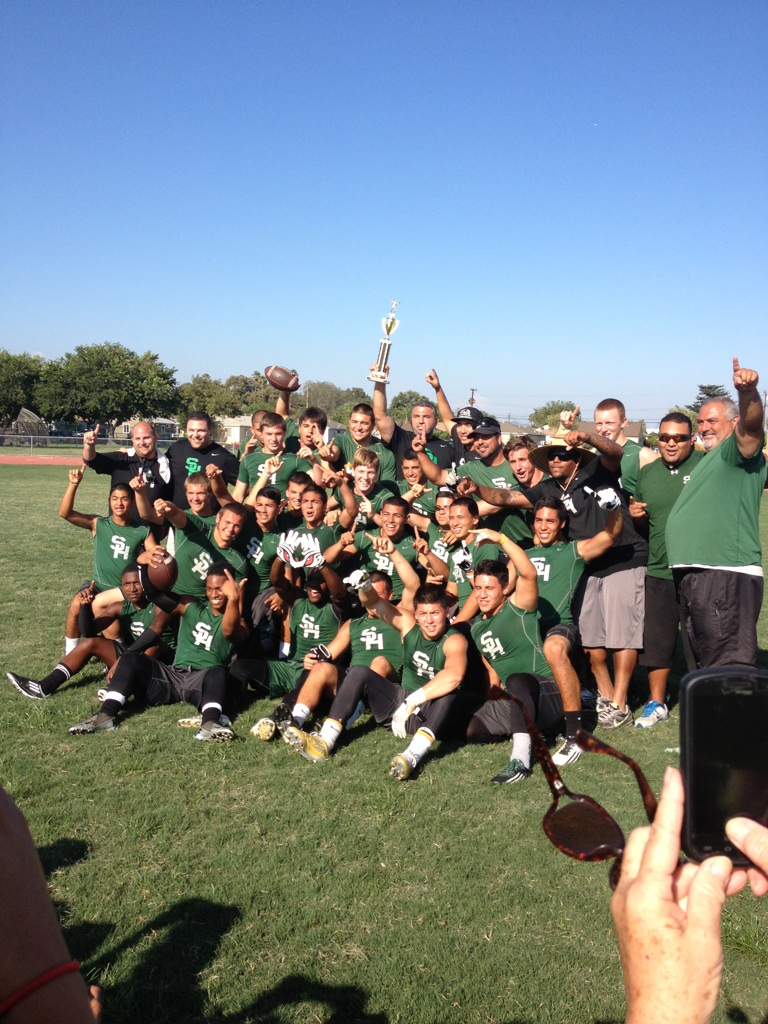 The Huskies were primarily a ground and pound team last season, but have looked very strong passing the ball this summer. The Tournament of Champions had a field of 30 teams.

“You’re in your underwear and everyone looks good,” South Hills coach Albert Rodriguez said. “But the way we look at it is that we’re starting to get some athletes back in. Our skill guys are matching up. That’s what I really notice.”

Rodriguez cited the strong play of junior quarterback Garrett Fonseca on Saturday along with good performances out of skill players Adam Goss, Alex Powell and D’Angelo Ross. Fonseca is expected to see plenty of time under center despite the fact that last year’s QB, Goss, returns. Goss is likely to play heavy minutes at running back.

But does Fonseca’s play mean the Huskies are going to be a passing team?

“Hopefully not,” Rodriguez said. “Hopefully we can run the ball. I never want to throw more than 20 times. I think our passing game will be better, but trust me, we’re not trying to hang our hat on throwing the football.

Aram’s take: It will be a pretty nice dynamic to the Huskies’ offense if they can pass. Last year they really couldn’t, but were still solid. This definitely will open some eyes and certainly bolsters South Hills in my book. The skill players have improved and Fonseca looks like he might be a force in the passing game.

Aram’s take: Amat was in its own element today and lost to what many consider to be the heavy favorites to win the Pac-5. Still a solid showing by the Lancers, who are historically not known for passing tournament success.