***UPDATE***Sources close to the Diamond Bar football team are saying the school is bracing for the very real possibility that it will have to forfeit its Nov. 1 game against Rowland due to being unable to field a team after suspensions are handed down tomorrow by the CIF-Southern Section.

Diamond Bar’s roster is expected to be extremely hard hit and there’s now doubt that the Brahmas will have enough players when they next take the field on Nov. 1 against Rowland. If Diamond Bar is forced to forfeit the game, it could cost the Brahmas a chance to make the Southeast Division playoffs.

Diamond Bar will not be allowed to pull up players from its JV team to make up the difference because doing so would fly in the face of the punishments that will be levied on Wednesday.

Sources say that both the Diamond Bar and Diamond Ranch high school football teams are expected to be hit with a large number of player suspensions later today when the CIF-Southern Section releases an official statement about its findings in the wake of last Friday’s brawl between the two teams, which caused their game to be stopped with over 3 minutes remaining on the clock in the fourth quarter.

Among those expected to be suspended for Diamond Bar is standout receiver Cordell Broadus, who is the son of rapper Snoop Doggy Dog. One source said the Brahmas could be hit with more than 20 player suspensions. Diamond Ranch is also expected to see a high number of players ruled out for Friday’s game against Rowland.

The suspensions would be for one game, although both schools can also impose further punishment. Diamond Bar has a bye this week. Its suspensions would take place the following week when the Brahmas play Rowland.

UPDATE: The number of Pomona football players suspended for their role in last week’s brawl during the Wilson game has risen from 12 to 18, according to a source close to the team. Pomona issued its own suspensions earlier this week, but the CIF-Southern Section has reportedly stepped in and added more players to the list. Pomona is 7-0 and plays Baldwin Park (6-1) in a key Valle Vista League game on Friday night.

Confirmed: Twelve players, FOUR OF THEM STARTERS, will be suspended from Pomona High School’s football team for Friday’s game against Baldwin Park. The players were deemed by the school to have participated in last Friday’s brawl against Wilson. Pomona is 7-0 and bidding for the Valle Vista League championship.

STORY: Chaos in the Hacienda League typically comes from the wacky scores that roll in on Friday nights and wreak havoc on the standings.
That isn’t the case this week, however. Schools officials from Diamond Bar and Diamond Ranch high schools, along with CIF-Southern Section officials, are trying to sort out the aftermath of a brawl that ended Friday’s game between the Brahmas and Panthers with just over three minutes remaining on the clock.

Matt Koffler is once again the head coach of the Rosemead High School football team … but only for a week.

Koffler was asked by school officials to return as Panthers head coach for this week’s game against El Monte after the school was prompted by the CIF-Southern Section to take disciplinary action against head coach Marc Paramo and an assistant coach for an unspecified rules violation.

Paramo has guided the team to a 6-1 record and Rosemead is currently tied for first place in the Mission Valley League with Arroyo.

“We are satisfied with the actions taken by the school,” CIF-Southern Section Director of Information Thom Simmons said.

Simmons refused to say why the Southern Section recommended Rosemead take action against Paramo and his staff, but did add that the Panthers will not be forced to forfeit any wins.

Following the school’s move to suspend Paramo, it contacted Koffler and the former standout quarterback agreed to return for one game. Koffler has had two previous stints as head coach at Rosemead. He resigned following the 2010 season.

“My athletic director told me what’s going on and I concurred with everything,” Paramo said. “Am I disappointed? Yes. But like I told the kids, it’s not about who, it’s about how. How we respond to this.

“I told Koffler to do what he wants to do. He’s running practice. In no way am I micro-managing either. I told him to do what you do.”

Rosemead is a heavy favorite to beat El Monte, which has struggled to a 1-6 record in 2012. Paramo will be back the following week when the Panthers play Gabrielino. 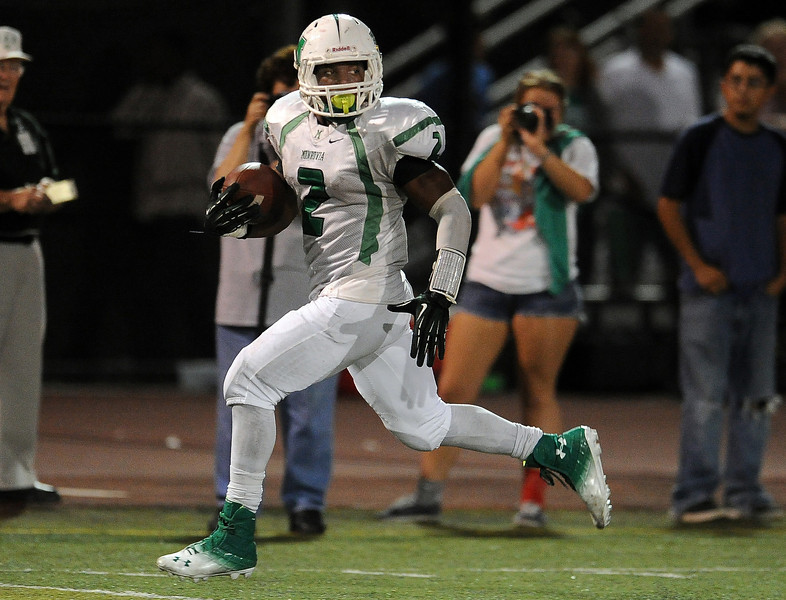 Monrovia running back Kurt Scoby has given a “soft commitment” to Fresno State, according to several recruiting websites.

Scoby, a senior, has rushed for 1,268 yards and 16 touchdowns this season.

Aram’s take: No clue what a soft commitment is.