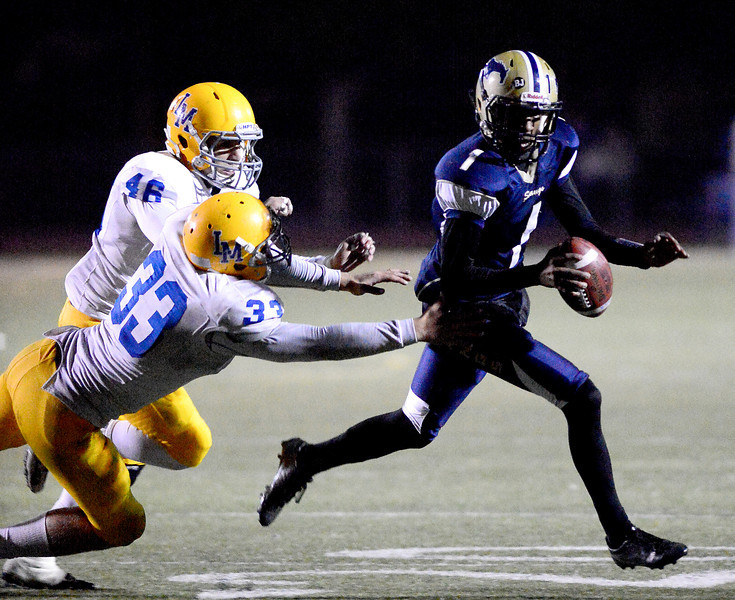 UPDATE: The referee who threw the flag has informed CIF he will not rescind his decision and Williams is officially suspended for Friday’s game.

Muir standout quarterback Dejon Williams is ineligible to play in Friday’s quarterfinals playoff game against Los Altos after being ejected toward the end of last week’s 53-35 win over La Mirada in the first round of the Southeast Division playoffs.

According to Muir coach John Hardy, Williams was ejected after receiving the second of two taunting penalties in the game. Per CIF-Southern Section rules, any player who is ejected from a contest is automatically forced to sit out his team’s next game.

Hardy said late Tuesday that the school will fight the decision and that he’s confident Williams’ ejection will be overturned. According to Hardy, Williams’ second taunting penalty came when he threw the ball to the referee after scoring a touchdown on a interception return and the referee did not see the ball and was struck by it and threw a flag.

Also late Tuesday, a CIF official said that the Southern Section cannot rescind an ejection. The only person who can do that is the referee. If that happens, Williams will be eligible to play on Friday.

Friday’s game was called early with under a minute on the clock after a fight between La Mirada and Muir players.

Aram’s take: This would be totally devastating for Muir to not have Williams for a game of this caliber. Hopefully, the matter gets resolved soon. During the scuffle that happened at the end of the game, I was interviewing Williams (yes, with time still left on the clock) and he suggested we move further down the sideline to get away from the situation. So this situation can certainly have nothing to do with that. Nobody wants to see a player like Williams, who is having a dynamite season, be forced out of such a big game. If it’s true and the ref didn’t see the ball, and Muir says it has video of the incident, then this needs to get overturned.

“I was just thinking about how I’m going to get ready because I’m going to be on the field,” Hull said of his thoughts toward the end of Brahmas’ 63-29 beat-down over defending champion Downey. “I couldn’t believe it. They kept promising me that I was going to play this year and they kept their promise.” 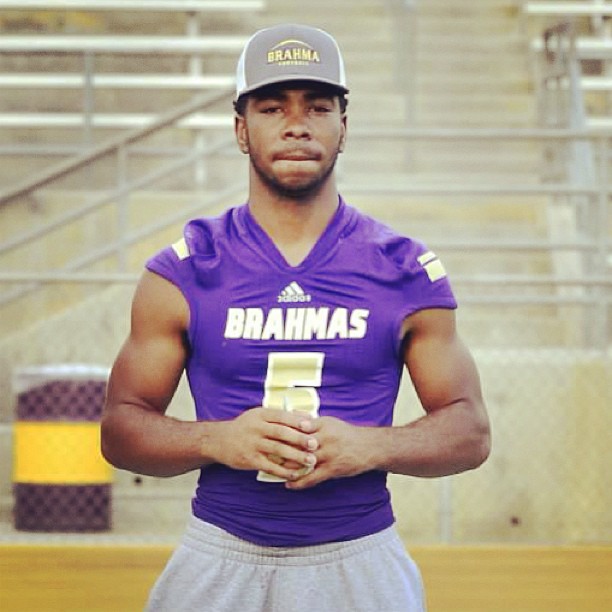 By Aram Tolegian, Staff Writer
The Diamond Bar High School football team kept its promise to teammate Antonio “Noodles” Hull.
When Hull, a standout all-purpose threat on offense and defensive back, was declared ineligible last summer by the CIF-Southern Section until Nov. 16 after it determined his transfer from West Covina to Diamond Bar was athletically motivated, his teammates assured him they’d get to the second round so he’d have at least one game his junior season.
Last Friday night, the Bramhas delivered. Diamond Bar, the No. 3 team out of the Hacienda League went on the road and put a 63-29 whipping on defending division champion Downey.
And because of that, Hull will be suited up and fully eligible for game action this Friday when the Brahmas host powerful La Serna in the second round of the Southeast Division playoffs. Kickoff is 7:30 p.m.
“I was just thinking about how I’m going to get ready because I’m going to be on the field,” Hull said of his thoughts toward the end of the Downey game. “I couldn’t believe it. They kept promising me that I was going to play this year and they kept their promise.”
After some late-season drama that included a forfeited game against Rowland due to suspensions that came as a result of a brawl against rival Diamond Ranch on Oct. 18, the Brahmas appeared to be real long shots to even make the playoffs heading into Week 10.

THIS IS IN HONOR OF THE STANGS FEVER CURRENTLY BEING FELT UP HERE IN PASADENA … “WHERE I STAY AT”.

This was before Amat game in 2010. Sims is currently on staff at Muir.

The pairings for the CIF-Southern Section high school football playoffs have been out since mid-day Sunday. That’s more than enough time to turn any of us into an expert as we look ahead to just how each division will play out.

Fans, coaches and players are going to be treated to a wild ride over the next four weeks. The emotions of the playoffs are second to none. The lifetime of memories that will be built up are truly magical.

So why not try and spoil all the suspense by breaking out the crystal ball for a division by division preview of how everything will play out for our local teams?

Explanation: La Serna gets the slight nod and it’s slight because nobody would be shocked if the Lancers lost in the second round to Downey, assuming that match up comes off. Norwalk is a legitimate No. 1 seed, but how many times in the past have we seen 10-0 teams falter in the postseason? It seems like only the truly great ones go 14-0. La Serna has the best quarterback in the division in Frankie Palmer and that should be enough to pull out the close games along the way to a third consecutive trip to the finals.

Explanation: Ho-hum, this looks like one of the easiest divisions in the Southern Section to call. The Mission League teams lay over the rest of the field and only when they cannibalize each other will they be stopped. St. Francis is the local charge, but asking the Knights to finish the regular season with Serra and Chaminade in back-to-back weeks, then reel off four straight wins is a bit too much … especially with Serra in their half of the bracket.

Explanation: Now this is one heckuva division. Let’s get one thing out of the way, though, the Empire League teams are in big, big trouble. The local hope here is La Habra. The Highlanders are back to traditional strength and the No. 1 seed. But they’re very likely to have to beat three Sunset League teams along the way to bring home a banner. If things play out as projected here, the semis should be epic. But this looks like a deceptively tough path for a No. 1 seed to take starting from the second round on. Edison doesn’t have nearly as difficult a draw as the Highlanders and that’s why we lean their way.

Explanation: The division of good, old-fashioned neighborhood football … and Monrovia. The Wildcats are odds-on favorites to win their fourth consecutive division title, but the real drama is who will play them in the finals. There are three legitimate finals contenders in the “other half” of the bracket and they are San Dimas, San Marino and Arroyo. The best game of the entire playoffs might come in the second round if San Dimas and San Marino meet, which is likely to happen. But in the end, this is all about Monrovia showing off for the bowl committee.

Explanation: The way things are seeded, this is supposed to come down a rematch of last year’s finals between defending champ Rio Hondo Prep and Mission Prep. One problem, though, Salesian is the best team in the division. The Kares are likely to see Salesian in the semifinals and will be decided underdogs despite what the seeding says.

Explanation: The local charge is headed up by Sierra League champion Charter Oak. Although not as flashy as the previous two years’ teams, this Chargers group is likely to wind up with the same bottom line as the previous two: a bow out in the second round. Charter Oak got a wicked assignment having to play Vista Murrieta if both win in the first round. We’re looking elsewhere for teams set to make a deep run. Rancho Cucamonga went from a top-four seed to just a second-place entry after getting stunned by Upland in Week 10. Both Baseline teams are headed to the semis, however, in our opinion. From there, last year’s power teams will take over and meet again in the finals with Centennial coming out on top again.

Explanation: The Tri-Valley League absolutely lays over this division. In fact, it might have the top-five teams and get this, ALL FIVE teams got into the playoffs … yes, even Santa Paula, which went 0-4 in league. We project all five teams will win their first-round games. We also project the semifinals will be four Tri-Valley League teams. Fun isn’t it? And in the end, Nordhoff wins it all. This isn’t what a division should look like, but then again, many have considered the Tri-Valley to be CIF’s wasteland division.