With the votes counted and Damien headed back to the Mt. SAC Area for league grouping and into the Baseline League beginning next fall, Spartans football coach Mark Paredes isn’t exactly breathing a sigh of relief.

Before Damien won its arbitration hearing to get out of the parochial grouping, the Spartans appeared on their way to being in a PAC-5 Division league along with several catholic football powers.

Now, Damien will be in the Baseline League where it traded the likes of Bishop Amat, Notre Dame and Serra for Upland, Rancho Cucamonga and Chino Hills. Not exactly a huge relief.

“I like the league we’re in now and it’s a good opportunity to play great competition and I’m looking forward to it,” Damien head coach Mark Paredes said. “To me it doesn’t matter. We’re going to work hard and be ready to play in whatever league we’re going to be in.

“Whether we’re in the Pac-5 or where we are now, it’s really neither here nor there because we are where we are and I’m really excited about being in the Baseline League.

Damien went 5-5 in Paredes’ first season. The Spartans were hit hard by transfers out of the program following the leadership change of former head coach Greg Gano and the transition to Paredes. But still, Damien managed to beat Chino Hills in the final week of the season.

The Spartans’ nonleague schedule was unaffected by the league change and a few former Sierra League foes in the form of Ayala, Charter Oak and South Hills appear on it.

Notably missing is Bishop Amat, which Gano took off the schedule before leaving. Paredes, who originally said he didn’t like the idea of playing Amat because of his ties as a former coach of the Lancers, has softened on that position a bit and said Amat is likely to be added back to the schedule if an opening arises in the future.

“I’m going to say it straight out — I’ll play Bishop Amat,” Paredes said. “Right now our schedule is full and we’re not moving anything. But in the future I’d be open to anything.

“Coach Hagerty called me and he wants to play us. We’ll go ahead and we’ll play Bishop Amat if we have room in our schedule. Right now, we don’t.”

The National Football Foundation and Hall of Fame has selected San Marino’s Mike Hobbie (West) and Pomona’s Aaron Jamieson (East) to coach in this spring’s renewal of the San Gabriel Valley all-star game.

The East holds a six-game win streak in the series and an overall 22-10-2 lead.

The game will be played on May 16 at West Covina High. 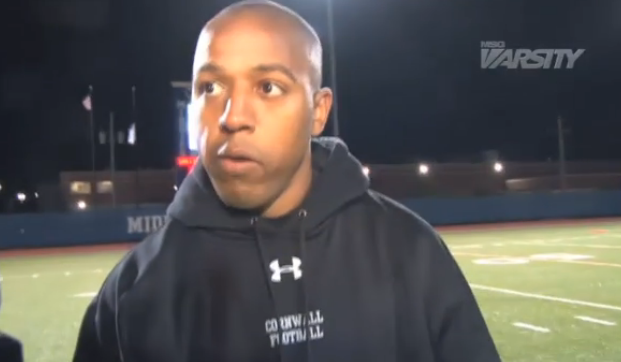 Diamond Bar High School looked far and wide for its next football coach and found him in New York.

The school announced on Wednesday that Marcus Hughes, who spent the past six seasons at Cornwall Central High in New York, is the Brahmas new varsity football head coach.

“We expanded our search nationwide and Coach Hughes stood out far and above all of the other candidates we had,” Diamond Bar athletic director Kurt Davies said. “His track record not only with winning and losing but with developing young men and developing them academically, that stood out. He’s definitely going to be the leader we’re looking for, for a long time.”

Hughes, 34, replaces Ryan Maine, who resigned in February after three seasons with a 15-17 record and one trip to the CIF-Southern Section playoffs.

Hughes is originally from Colorado and was looking for a job in California in order to move here with his wife and children. He went 67-13 in seven seasons at Cornwall and went to the state playoffs in New York the past three seasons.

“I was extremely picky about applying for jobs in California,” Hughes said. “I saw Diamond Bar on the internet and the first thing I looked up was the academics because of my three daughters. And I went back and researched the history on Diamond Bar football.

“I decided to apply and talked to Kurt and he sounded like a great guy. When you interview for jobs, you can tell a lot about a school by talking to the committee and they do a great job over here.”

Hughes inherits a program that has fallen hard times since being one of the area’s most successful up until the late 1990s and early 2000s. Since then, a demographics shift and the opening of several other schools nearby by like Diamond Ranch and Chino Hills have cut into the talent pool.

The Brahmas were 7-5 this past season and upset 2012 Southeast Division champion Downey in the first round of the playoffs before losing to 2013 champ La Serna in the second round.

Diamond Bar is currently slated to play in the newly formed Palomares League next season, but that’s somewhat in the air as the Mt. SAC Area for re-leaguing will meet later this month to alter several local leagues in order to fit in Damien/St. Lucy’s.

Davies said that Diamond Bar had 140 applicants for the job.