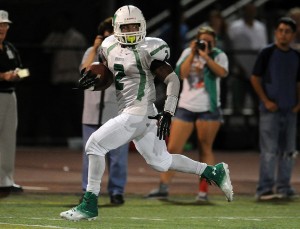 Monrovia High School running back Kurt Scoby made good on his promise to get his academics in order and signed with Fresno St. on Tuesday afternoon.

Scoby, one of the top running back recruits on the West Coast, originally chose Fresno St. in fall but was unable to sign in February due to some unmet academic requirements. Fresno St. reserved Scoby’s scholarship in hopes of him qualifying and that’s exactly what he did.

“My reaction is thanking God and proving people wrong. I’ve dealt with adversity for a while and I wanted prove people wrong and do what people said I couldn’t really do.”

Nobody’s ever doubted Scoby’s football talents, but many area fans were skeptical that he could reach the next level after bouncing around several schools since spending his first two prep seasons at Charter Oak.

Scoby left Charter Oak for Duarte in 2012 following a stellar sophomore season that saw him rush for over 1,500 yards and 21 touchdowns. Scoby never played a down at Duarte and eventually wound up at St. Paul where he played half of his junior season.

Scoby left St. Paul and briefly enrolled at Cathedral and Alemany before finally winding up at Monrovia. It was a decision he said helped him get his academics straightened out while still being able to shine on the field.

“Being at Monrovia, I was back home and people really didn’t care about the athlete I was. They wanted me to be successful. They taught me how to be a student and it came out good.”

Scoby rushed for 2,206 yards and 35 touchdowns for the Wildcats last fall. He’s hoping to compete for a starting job at Fresno St. this season and said the Bulldogs’ non-conference schedule, which includes games against USC and Nebraska was a major draw for him.