Here’s something you don’t say very often: CIF hit it out of the park.

It’s been a few days since the CIF-Southern Section office made public its playoff grouping proposals for football. And in what may come as a shock to many, they nailed it.

By now, everybody has had a chance to pour over the proposed divisions which will go into effect this fall. Try as you might, it’s hard to come up with any disagreements.

First, let’s start with the local landscape. The big question going into this cycle of grouping proposals was where would CIF place the newly formed Palomares League? In what amounts to a dream situation for local fans, the Palomares will be in the Central Division along with the Hacienda League, Rio Hondo League, Sunkist League and Mt. Baldy League.

This proposal means get ready for potential postseason matchups like Los Altos vs. South Hills … or West Covina vs. Glendora … or Charter Oak vs. Monrovia. About Monrovia. That brings us to the only bit of controversy that’s come from the proposals.

To the Rio Hondo League, I say tough toenails. You had the chance to do something about your Monrovia problem last year. The Wildcats tower over the league in football and were good enough in several other sports to have withstood a move to a different league, like, say, the Pacific League.

Instead, the Rio Hondo League, which is a broken league on so many levels thanks to Monrovia’s football dominance and Blair’s inability to have a stable athletics program, chose to leave things the same.

By way of the Rio Hondo League’s inaction last year when re-leaguing was done, the powers that be left the entire league vulnerable to exactly what happened — everybody getting bumped up on account of one team.

The Southeast Division got an unexpected twist when CIF proposed to move the Mission League in and significantly boost the championship chances of teams like St. Francis and Cathedral. But more than just improving the chances of already established football programs, being in the Southeast Division also gives other Mission League teams like St. Paul a chance regroup and start working its way back to prominence.

It won’t be easy for the Mission League, though. The Suburban League, with La Mirada and Norwalk, is no pushover. The Del Rio League has a burgeoning powerhouse in La Serna. The San Gabriel Valley League is chalk full of teams that have plenty of talent at their disposal. And then there’s the Pacific League where Muir is on its way back and Burbank figures to a tough out again this fall.

On the surface, it appears that San Dimas is about to become the next version of Monrovia — a well-oiled program that really has only one or two legitimate threats to its chances of winning multiple CIF championships.

The Saints figure to be annual favorites in the new-look Mid-Valley Division, and that’s a good thing. San Dimas showed last year in its winless nonleague that it’s not ready to hang in something like the Central Division. But the Saints are not infallible either. See 2011’s semifinals loss to San Gabriel.

More than giving San Dimas an opportunity to take the next step as an area power, the new-look Mid-Valley Division, by getting Monrovia out of the picture, opens the door for true neighborhood football programs like Arroyo or Rosemead or Montebello to enjoy a prolonged postseason run more often.

CIF is under no obligation to make things perfect for a particular area in terms of potential local matchups that will drum up interest from fans and lead to big crowds. Of course, doing so only helps their bottom line.

The main goal should be to create divisions where you don’t already know the winner in August and just about every team that finishes in the top three in its league feels as though it has a realistic chance at a deep run.

That’s exactly what has happened here and for it this sportswriter is prepared to give CIF the rare pat on the back. 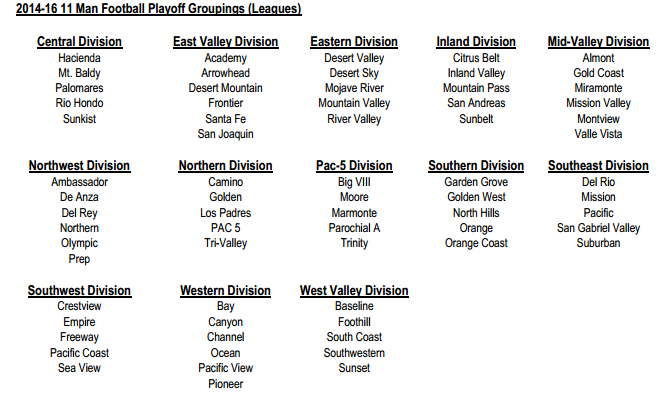