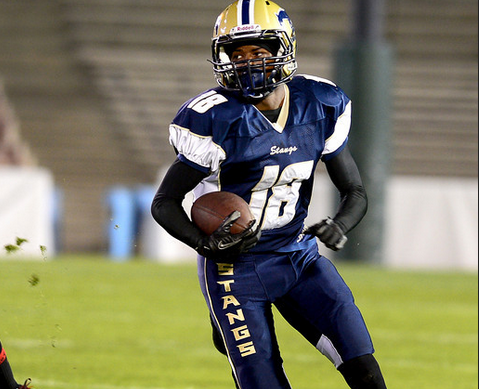 Muir WR/DB Taeon Mason, a two-time Star-News All-Area selection, has committed to play next fall at Washington St. Mason had previously committed to USC before recently opening his recruitment up again.

Mason is likely to play receiver and return kicks for the Cougars. Opposing offenses simply didn’t throw to Mason’s side of the field this past season. On offense, Mason had 569 yards receiving and eight touchdowns. 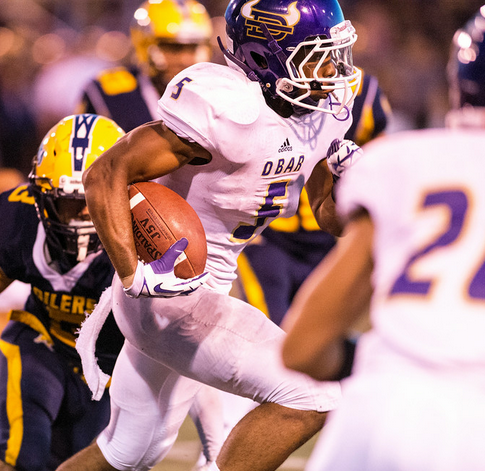 Hull, who missed all but one game of his junior season after his controversial transfer to D-Bar from West Covina, which CIF ruled to be athletically motivated, rushed for 1,278 yards and 12 touchdowns in 2014.

Hull also had 235 yards receiving and two scores, and even threw three touchdown passes. Hull was also dangerous returning kicks where he finished with 526 return yards. Hull also added 38 tackles on defense. He was an all-Palomares League selection.

The tweet said that Konrad informed the team of his decision via text message on Thursday. Konrad was at the center of a controversial situation that centered around the filming of league foe La Canada’s practice the week of the game between the two teams in November.

La Canada alleged that Konrad’s brother, a former Tigers assistant coach, was spotted filming its practice. Rio Hondo League officials decided the week of the game that South Pasadena would forfeit its win and subsequently an opportunity to compete in the CIF-Southern Section Central Division playoffs.

South Pasadena won the game, which was for third place in the Rio Hondo League and the league’s final guaranteed playoff spot. Players weren’t informed of the league’s decision that a Tigers win would result in a forfeit until after the victory. It was a move that set off hard feelings among many South Pasadena players and their parents.

In a November letter to players and parents, Konrad admitted his brother was at La Canada on the day in question, but had not been a member of South Pasadena’s coaching staff for the past two years. Konrad’s brother, who was at the practice for 15 minutes and photographed leaning up against a fence, according to the letter, has a teenage who son who plays at neighboring St. Francis.

Also in the letter, Konrad charged the South Pasadena High administration with rushing to judgement without conducting a thorough investigation. Konrad was suspended for the La Canada game. South Pasadena won 21-3, but La Canada went to the playoffs where it lost in the first round the following week.

The Rio Hondo League held a special meeting in late November at Temple City High to cure and correct its original decision. Several South Pasadena parents had hoped the meeting would result in a reversal of the league’s original decision or a reconsideration of the facts despite the fact that playoffs were already well underway at that point.