Good news for Bishop Amat, bad news for the rest of the PAC-5. Sources say that senior running back Torreahno Sweet has rejoined the Bishop Amat football team after missing all of spring due to an undisclosed violation of team rules.

Sweet was Amat’s leading rusher last season and gave the Lancers’ offense a jolt at midseason when he was inserted into the starting line up. With Sweet toting the ball, Amat’s opponents have a serious problem trying to stop both the run and super-recruit receivers Tre Sidney and Tyler Vaughns in the pass game.

A few days after Bishop Amat fans took the streets in celebration of their No. 24 national ranking in the MaxPreps Top 25, a big blow came from the very same publication when Pac-5 rival St. John Bosco was placed at No. 15.

Yours truly warned Amat fans not to get too excited about the No. 24 ranking BEFORE we see just where the rest of the PAC-5 is placed.

Regardless, it’s a good thing to be ranked at all and for what it’s worth I would take Amat over SJB if they played.

By now, you’ve probably heard the news. Bishop Amat has been made the No. 24 team in the country by MaxPreps. This is certainly a great honor. Obviously, MaxPreps doesn’t have the same intimate knowledge of Bisohp Amat football that yours truly or Freddie Robledo does. It’s impossible. These outlets have so much ground to cover and have to do it all from afar. So, in order to provide a more in-depth opinion of the Lancers as things stand in mid-June, I will give readers a glass half-full and glass half-empty perspective on Bishop Amat’s outlook this season.

Any time you’re a point away from the CIF-SS PAC-5/D-1 finals and return the bulk of your team, there’s good reason to be excited. Amat has two super recruits in receivers Tyler Vaughns and Trevon Sidney. And if you’ve seen Sidney at all this spring/summer, you know the kid is even better than last year at this time and is on the verge of something special. The top-two QBs also return and both look good enough to start, although Ryder Ruiz was named the starter coming out of spring (things could change). The offensive line is certainly big enough (a problem in the past) to stack up against SoCal’s best. The defense has an extremely athletic secondary that goes beyond Vaughns and Sidney thanks to a guy like Chris Gaston. Amat has the size and speed to compete with anyone. The way this team caught fire the second half of last season was downright scary. The way the current team is performing during the passing circuit provides even more reason for optimism. The collection of talent is certainly the best I’ve seen in my time at the Tribune.

Without running back Torreahno Sweet on the team, all bets are off for me. It’s no coincidence that Amat’s season turned around last season when Sweet emerged as the rushing threat that was so badly missing. Well, Sweet is still off the team (despite what you saw/heard in the MaxPreps video) and judging from the clues given by both parties, it doesn’t look like he’ll be back. That is a gigantic blow. On to the quarterback situation. Two-headed monsters at QB are no good in football. It can be done easier the HS level than it can in college or pro, but still this is a low percentage predicament. How will the coaches handle the Ruiz/Damian Garcia rotation? Does Ruiz play all four quarters and Garcia is a true back up? Do they alternate quarters/halves? Again, it’s rarely a good thing. Offensive lineman Andrew Lopez. Until Amat shows during the season that it can have a strong ground game without Sweet, the offense has to be downgraded. On defense, linebackers Anthony Camargo and Christian Wiley both have to be replaced. They were the heart and soul of the defense. The replacements are talented, though, and have some experience. And finally, there’s the old question of consistency. Amat took considerable criticism last season from me after starting 2-3 overall and 0-1 in league. It was justified at the time. This team should have NEVER lost to Santa Margarita, Crespi and especially Chino Hills. The Lancers figured things out eventually, but will they hit the ground running in 2015 or need a month to get in gear? Amat went on a fantastic run last season. And finally, back to the No. 24 ranking. Before Amat fans get too excited, let’s see if any other Mission League or Trinity League teams are ranked higher. 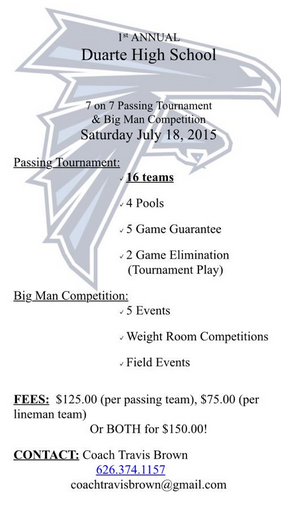 Aram’s Take: I’ve said it before, this kid is one of the top two or three athletes in the SGV. I’ve seen him play hoops and he has insane athleticism. As a WR, or more likely a DB, some college is gonna score on him. In terms of pure talent, I believe he’s up there with Vaughns, Sidney, Echols, Fink et al.