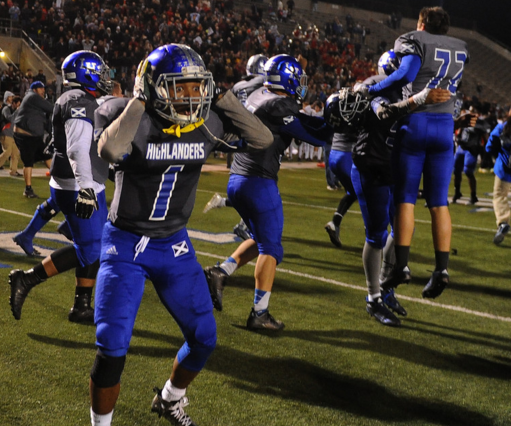 For La Habra fans, it should have been rushing the field after quarterback Eric Barriere and receiver Prince Ross hooked up on the biggest pass play in school history to beat San Clemente on the final play of the Southwest Division championship game.

Over at La Mirada, the last thing anyone should have remembered about the 2015 season was the hug-fest that ensued after the Matadores completed a simply dominant run through the Southeast Division with a sound victory over nearby rival La Serna.

It doesn’t get any more storybook than those three. But thanks to the current system, all three teams are right back in action this weekend in anti-climatic CIF State regional bowl games.

Should they win those, the season continues for an unprecedented 16th game the following week with a State championship bowl game that could take place here or in Sacramento.

It all adds up to a season that could last a whopping 16 games and end Dec. 19, less than a week before Christmas.

The obvious question is why? Why do we even need this? Who out there was so bent on cracking the mystery of whether San Marino could beat Sierra Canyon in Week 15? Who were the fans that moments after La Mirada won the Southeast Division asked, “Could we beat Oceanside?”

The easy answer that most fans come up with is pure and simple greed by CIF to squeeze another two game’s worth of revenue out of the most popular sport. But that’s not exactly the case, reminds CIF State spokesperson Rebecca Brutlag.

“We’re governed from the ground up and our schools make the rules, so our schools requested this,” Brutlag said. “They wanted to have all section champions have an opportunity to participate in a bowl game. Previously, the way this worked was that if you were a section champion, you got voted in to play in a state championship bowl game. You didn’t automatically qualify.

“Now, if you’re a section champion, you do get the opportunity to play for a state championship.”

If you weren’t aware of the groundswell of schools pushing for this playoff configuration, it’s probably because you live in the Southern Section, where next to nobody wanted it. The Southern Section actually voted against it, but in CIF’s version of the electoral map, it didn’t matter.

Since 2006, the state bowl game system has been gradually expanding. This season is the biggest it’s been. There’s 25 regional bowl games this weekend. There will be 13 state bowl games next week. Originally, there were only three state championship bowl games and no regionals.

The local teams who have to somehow get “up” again after their biggest wins of the season and play another game or two have to put on a good face about it.

At San Marino, Glazier admits he and his team weren’t originally aware that their season could last beyond 14 games. But since the Titans are the first team in school history to be part of such a system, they’re hoping to make the best of it.

At La Mirada, head coach Mike Moschetti is selling the notion that his team’s goals all along were to play for a state bowl championship. But if you saw last week’s postgame celebration, it’s hard to imagine anything else could mean more to the Matadores than the Southeast title.

Perhaps La Habra head coach Frank Mazzotta put it best when he didn’t say either way whether he liked the system, but was just so happy to have another week or two with his team. And that the Southwest Division championship is won and can’t ever be taken away.

In theory, La Habra, La Mirada and San Marino should celebrate a win this weekend harder than they did last week. But we all know that won’t happen. All three teams have proven their points loud and clear. They’re all champions who accomplished all they needed in their own right.

What happens this weekend is just gravy.

The celebration is over and it’s back to work for local high school football teams who won CIF-Southern Section championships this weekend and are now in CIF State Regional Bowl Game Championships.

The big tweak to the postseason format means that unlike previous seasons when the celebration of a Southern Section championship would last for the rest of a school year, now, it’s less than a day.

San Marino (14-0) beat Charter Oak on Saturday night to win the school’s first CIF championship in football since 1988 found out early Sunday afternoon that it will host Sierra Canyon (14-0) next Saturday night in the small schools division. Kickoff is 7:30 p.m.

“I’ve kind of been following them a little bit,” San Marino quarterback Carson Glazier said. “I know that they’re from the division we were previously in. I know they’re a powerhouse in that division. I really don’t know anything about their players as far as schemes go, but it should be interesting.

La Mirada completed a dominant run through the Southeast Division on Saturday night by blowing out La Serna, 45-20. The Matadores enter the state bowl system at 11-3 and were awarded a home game against Oceanside (9-4) in Division III-AA.

“I know just growing up an coaching high school sports, I think they’ve won like 16 or 17 championships,” La Mirada head coach Mike Moschetti said. “They have incredible tradition and I know there have been big-time players who have played there.

Moschetti isn’t concerned about any hangover effects for his team after such an emotional win over a nearby rival on Saturday.

La Habra probably needed and got the most time to come down off its section championship. The Highlanders (13-1) beat San Clemente on the final play of the Southwest Division championship last Friday at Cerritos College.

Next, La Habra visits Camarillo (14-0) on Friday in Division II-AA. Highlanders coach Frank Mazzotta said his coaching staff would use Sunday afternoon and evening getting familiar with Friday’s opponent.

“I know they’re 14-0 and have beaten some really good teams,” Mazzotta said of Camarillo. “The bottom line is we won a championship, so that’s done and you can’t take that away. And we get to be together again another week. How can you beat that?” 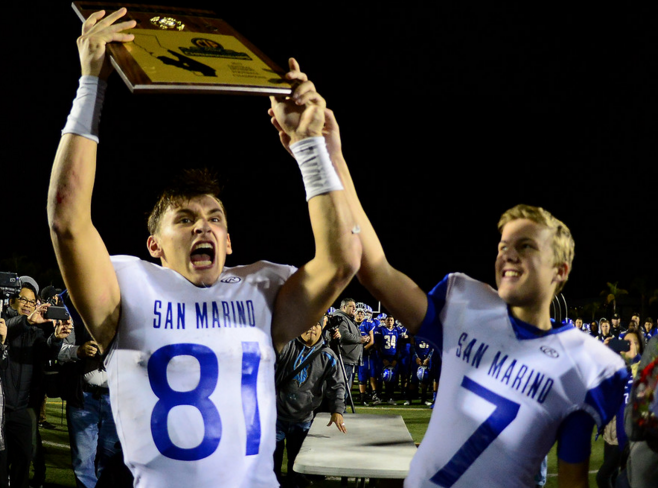 Central Division: San Marino trailed 7-0 early, but went on a 24-0 run to ultimately beat Charter Oak, 45-28. Has there even been a more underestimated 14-0 champion? The Titans have been simply amazing. And the ride continues next week … 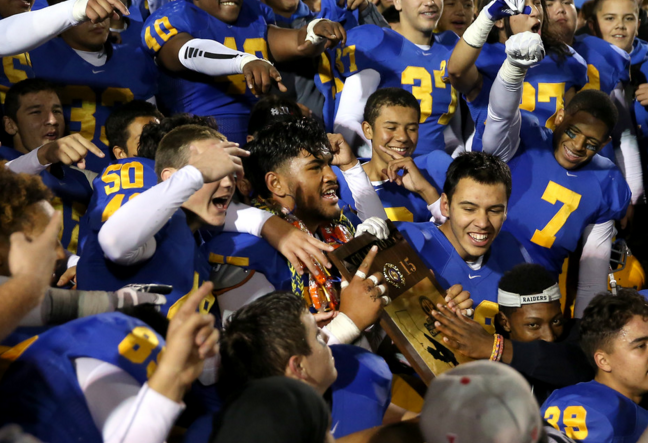 Southeast Division: La Mirada handled nearby La Serna to complete a simply dominant postseason run in the Southeast Division with head coach Mike Moschetti’s second CIF championship. The Matadores will be in action again next week … 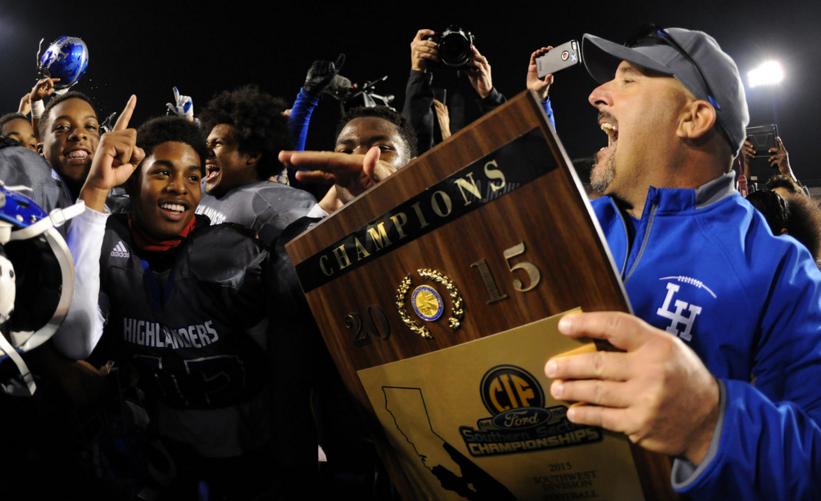 Southwest Division: La Habra, the No. 1-ranked team in the SGV(N) Top 25, appeared headed toward a tough loss in the Southwest final. The Highlanders gave up a late TD pass to San Clement and trailed 36-33 with only second left. But QB Eric Barriere hit Prince Ross on a 27-yard TD pass with no time left to win the championship. La Habra is 13-1 and going bowling.

Mid-Valley Division: San Dimas was a heavy underdog against Sierra Canyon, but the Saints hung tough, especially on defense. San Dimas gained yards, but not points, though. The Saints finish 10-4.

Perhaps the best way to get to the bottom of this match up is by looking at common opponents. The teams have two common foes this season — Diamond Ranch and Monrovia.

Diamond Ranch head coach Jimmy Welker has seen what both powerhouses can do up close and he thinks there’s lots more than meets the eye to be impressed about as it pertains to both teams. He shared his thoughts on certain aspects of each team.

“And their offensive lines do a great job of making sure their quarterbacks rarely get hit. That was something we were able to do against Charter Oak a little bit, not much, but we couldn’t get to San Marino one iota.”

Echols is the biggest home run threat in the game. He is among the Southern Section’s leading rushers with 2,033 yards and 36 touchdowns. Echols recently backed off his verbal commitment to Cal and has opened his college recruitment again.

Shohfi is among the state’s top receivers with 1,753 yards and 26 touchdowns. His lack of college offers remains one of the biggest mysteries in the area.

Although both teams get tons of headlines due to offense, neither would have such lofty records without defenses that have also put up stellar numbers only to be overshadowed by all the firepower on the other side of the ball.

“Both do an efficient job of getting to the football and kind of forcing offenses to get off of their game plan.”

When asked if there was a surprise that fans may not realize about either team, Welker wasted no time pointing to San Marino’s team speed and Charter Oak’s toughness.

“But both things are underrated from what you watch on film. Or, I should say the film doesn’t do them justice as to how physical Charter Oak is and how fast San Marino is.”

As for a prediction on the game? Welker wouldn’t offer a side, citing the game being that much of a toss-up.