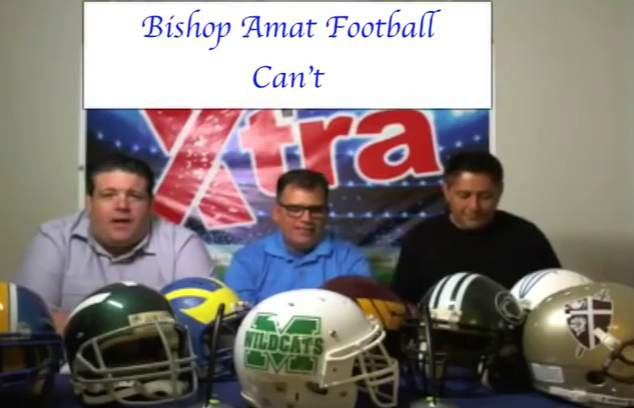 Bishop Amat has released its 2016 hype video. The underlying theme is pretty much that the Lancers are undermanned but it doesn’t matter because heart will overcome all. Oh yeah, and that veryone is doubting them. And that’s exactly what happens when you lose a bunch of guys who are now playing on Saturday. But the capper comes late in the video when a pic (see above) of an old PrepXtra Live show has some crappy editing above our sign saying “Bishop Amat can’t”. I’m kinda surprised by this because. What’s that mean? “Bishop Amat can’t?” Can’t what, show some class and let media stand on the sideline without some guy in a safari hat calling himself the football manager trying to throw them out? Can’t what, figure out that a CIF pass means access anywhere and they need to abide by that or until or unless CIF sees fit to revoke the pass? And why is Fred in that segment of the video? Do you really think he was hating on Amat? Was he hating on Amat at any point in the last 5 years when he constantly the program the benefit of the doubt? Were any of us hating on the program when it was basically made the subject of last year’s preview magazine, much to the chagrin of every other program in the area? Just another ridiculous maneuver from the Lancers’ head brass.

Note: This is the opening Top 25 for the SGV and Whittier areas combined, aka what we cover, aka SGV(N). There will be a new one each week reflecting each week’s results. This IS intended to hurt your feelings, offend you, make you happy, make you sad and ultimately say “this is pointless”. So, ENJOY! 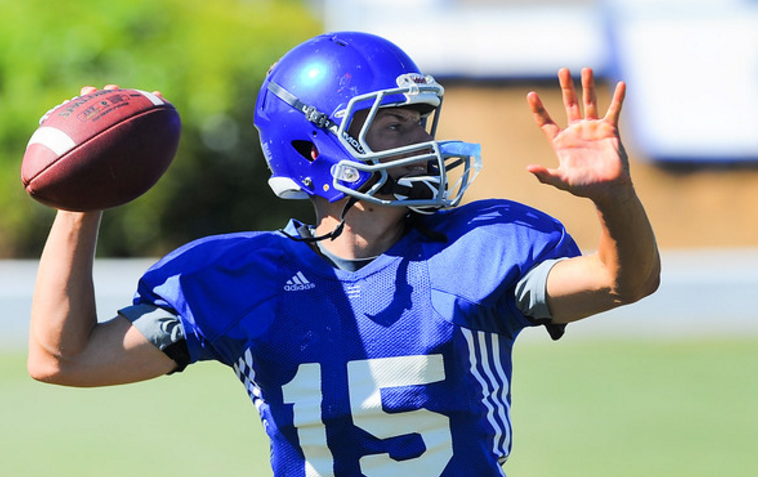 Players like Eric Barriere don’t come along too often. And they simply can’t be replaced.

The former La Habra High School quarterback who guided the Highlanders to a CIF championship last season is now at Eastern Washington. In his wake, head coach Frank Mazzotta is faced with one big question entering the season: who will replace one of the most decorated players in school history?

“It could be Zach Fogel, but I don’t know, we have another kid in the mix in Joe Hernandez,” Mazzotta said. “It’s actually a very live competition.”

Fogel, a junior, has been getting the majority of the reps while Hernandez recovers from an injury. Hernandez, a senior, is expected back soon and could make a late push for the job.

No matter who gets it, coaches are guarding either player against the notion that they have to be Barriere, who in addition to big stats also was a clutch player as evidenced by his last-second touchdown pass to beat San Clemente in the Southwest Division championship last season.

“We’re not trying to make the next Eric Barriere,” Mazzotta said. “And so the next quarterback can’t think that he’s got to be Eric. He’s just got to be himself. And whatever that is, we’ll make the most of it.

“Eric is irreplaceable. For sure. You can’t replace all the things that he did.”

Whomever wins the job is in good shape in terms of talented skill players to work with. Receiver Prince Ross, who was on the other end of the game-winning touchdown pass against San Clemente, is back. Pervis Henderson is another strong target.

The run game is loaded with talented backs, led by likely starter Eli Anderson. And the offensive line is supposed to be a formidable unit.

Because of La Habra’s success, the program was placed in Division 2 when the CIF Southern Section revamped the divisions this offseason and grouped teams based solely on competitive equity.

La Habra will prep for a potentially difficult postseason by playing a strong nonleague schedule that includes games against Division 1 teams in Mission Viejo and Tesoro.

“It’s a huge challenge,” Mazzotta said of being in Division 2. “But, it’s also a great honor. What an honor that we get to play in Division 2 with such great teams. Division 1 has 18 teams and Division 2 has 19 teams. So, we’re in the top 37 of 550-something Southern Section schools?

“That’s definitely a tribute to the legacy of the kids who played here before. And we need to honor that by working hard and playing our best. It’s going to be the biggest challenge our school has ever faced.”