Looks like the Baldwin Park City Council has decided to exclude all owner-occupied homes from Robert Bisno’s proposed downtown project.

The announcement was made at last night’s council meeting.

That should save a couple dozen homeowners from the eminent domain process, easing some of the concerns about the scope of the project.

But I guess there is no pleasing business owner Greg Tuttle, who is spearheading a recall effort against council members Marlen Garcia, Monica Garcia (not related) and Councilman Anthony Bejarano.

Tuttle had this to say this morning about the announcement: “We don’t trust them one bit. They are not giving any concessions. They are just following Prop. 99.”

Tuttle referred to the recently passed state initiative which includes the following amendment: “local governments are prohibited from acquiring by eminent domain an owner-occupied residence for the purpose of conveying it to a private person.”

What do you guys think? Is this a victory for Baldwin Park homeowners?

So it looks like there is “no doubt” that there will be an NFL team playing in Los Angeles by next season. Do you believe it?

Also, during a meeting with John Semcken, vice president of Majestic Realty, Semcken said that he has met with many local politicians in the SGV to try to get their support.

“How many of them have asked for free tickets,” I asked him.

Almost every single one of them. But instead, Semcken said that he offers them a suite, which will run about $300,000. Of course, they decline. But if they didn’t? Now that would be a good story. 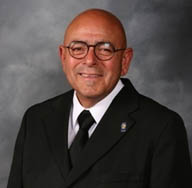 Azusa got the go ahead to annex portions of Azusa Avenue and Arrow Highway into the city.

A large section of the corner section was recently purchased by the city’s redevelopment commission, and officials said that it will be developed into a commercial center.

“The long wait is over and we can now focus our redevelopment efforts on this important gateway into the City,” Azusa Mayor Joseph Rocha.

Supervisor Michael Antonovich is calling on the Governor to stay away from the Proposition 1A funds. His office sent over a press release, but more entertaining than that are the photos included. Talk about a jovial looking bunch…

“I applaud Governor Schwarzenegger’s commitment to preserve Proposition 1A and protect our local revenues. In 2004, 83% of California voters sent a message to our state legislature — that local tax revenues remain with local government and be spent for local purposes,” said Antonovich. “It is unfortunate that the legislature has become stone deaf and forgot who elected them to office, as they look primed to raid our local funds once more to balance their budget.”

“Here in Los Angeles County, with the protection of our local dollars, we have been able to invest in our public safety departments — hiring 50 additional prosecutors, over 600 Sheriff Deputies, 3,300 jail beds, and 700 new positions in our Probation Department, said Antonovich.

Noting that 49 other states have enacted budgets, Antonovich called on the need for a part-time legislature and a 2-year budget.

“Right now many teachers amid uncertainty over the state budget are looking for other jobs, a two-year budget brings fiscal stability to this state. Also, California is one of only 10 states in the nation with a full-time legislature – it is not surprising that it is also among one of the most taxed states along with Massachusetts and New York. A part-time legislature would force lawmakers to focus on vital issues such as balancing a budget and not have the freedom to create so many new bills,” added Antonovich.

Open Forum: Should council members go on conferences out of state if their cities are facing deficits?

It looks like the city has the numbers after all for the cost of sending city officials on a sister city trip to San Luis Potosi, Mexico, Airan Scruby reports.

PICO RIVERA – Officials said it was “happenstance” that the cost of sending a Sister City delegation to San Luis Potosi, Mexico, was not released last week.

City Manager Chuck Fuentes said he did not provide information because he believed Interim Finance Director John Herrera would have records of how much money had been budgeted for the trip. Herrera was unable to provide the numbers, he said, because he was out of the office.

“This was one measly little trip, and I’m dealing with multimillion-dollar issues here,” Fuentes said. “I think it’s just out of proportion.”

City spokesman Bob Spencer said he had prepared information on the cost of the trip and the goals of the visit last week, but was not asked for information when this newspaper reported that no figures had been released about the trip.

“Nobody called me,” Spencer said. “I had the information. I don’t know whether the city manager had that information at his disposal or not.”

The city spent about $5,200 to send its five delegates, Spencer said. This was offset by $1,600 earned through sales of DVDs from the Miss Pico Rivera Pageant.

Last night’s meeting in Rosemead was quick — and comfortable. The new chambers made its debut last night.

The only thing the new seats were missing last night were a recliner. At the next meeting, the city will introduce the Granicus system, which is the system that allows the meetings to go up online.

ROSEMEAD — As the November election nears, city officials continue to grapple with a federal lawsuit that calls for compliance with voting laws.

Rosemead was sued by the U.S. Department of Justice in 2005 after an audit found that the city did not provide voter information in multiple languages, which is required by the Voting Rights Act.

While Rosemead has since complied with the lawsuit, officials continue to pay for outside consultants.

“We have satisfied their concerns,” said Councilwoman Margaret Clark. “But this helps ensure that we continue to follow their requirements.”

Tonight, City Council members will vote to approve a contract for Linda Hudson of Hudson Consulting Services, who will be hired to monitor two elections for no more than $36,000.

The total cost of the November and March elections is expected to be nearly $150,000, including consultant fees.

City officials said the workload and complexity of the consent decree is too much for the city staff to take on alone.

The Voting Rights Act requires governmental districts with a substantial number of people who speak languages other than English to provide all voting materials in those languages as well as in English.

Among the requirements of the federal consent decree was for Rosemead to provide election materials in Spanish, Vietnamese and Chinese, and to also provides oral assistance to voters who speak Korean, Japanese and Tagalog.

After the lawsuit, the city was reviewed by the Department of Justice during two subsequent elections, said City Manager Oliver Chi.

“It was a wonderful report stating that we had indeed lived up to the consent decree’s requirements to make sure there is equal voting access to all of the residents in the city,” Chi said.

The city will be monitored until the March election.

Rosemead was not the only local city targeted.

Walnut entered into a consent decree with the federal government after a complaint was filed in early 2007.

The agreement stated that election materials and assistance at the polling places would include Chinese and Korean languages for voters with limited-English proficiency.

In 2005, Azusa failed to fully translate its official ballots, polling signs and other voter information into Spanish, and Paramount did not provide official ballots in Spanish.

Paramount City Manager Linda Benedetti-Leal said the city has one more election to go. At the last election, she said that the city met all of the requirements by the Department of Justice.

“In our case, we only had Spanish to deal with, and we handled that with our in-house staff,” Benedetti-Leal said. “It was a lot of work, but if it was three languages, that would be a lot to deal with.”

There are several meetings today around the Valley:

Tonight will be a late night since I will be out covering Rosemead’s council meeting. Also today is a meeting with Majestic Realty’s Ed Roski, who will update the Tribune on his plans on building a football stadium in the city of Industry.

In Monrovia, the city is holding an informational meeting for residents on Royal Oaks Drive. I’m hoping they will give the reasoning behind having towering flood lights shining down on the street.

Rosemead, along with Azusa and Paramount, were sued the U.S. Department of Justice in 2005 for failing to comply with the Voting Rights Act.

In Rosemead’s case, it didn’t provide voter information in Chinese, Vietnamese and Spanish. Today, the city is still under review by the DOJ, and will be until the March 2009 election. Tomorrow, it will vote on whether to hire a consultant to take on the “burden of addressing the Consent Decree,” according to the staff report. The cost is no more than $36,000, at $60 an hour.

If you want to go to sleep, here is a copy of the Consent Decree.