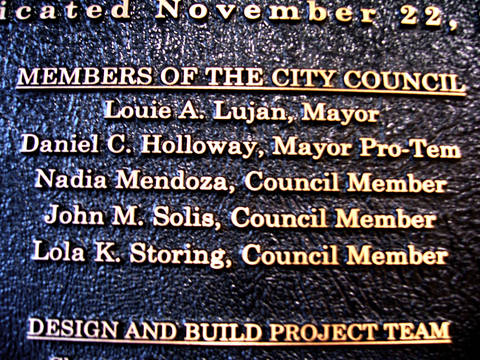 I wrote a story for tomorrow’s paper about a pair of bronze dedication plaques at the La Puente Community Center and Youth Learning Activity Center that are causing quite a stir.

Former Mayor Louis Perez said he was told by both a former city official and an employee with Chevron Energy Solutions — the project’s contractor — that Chevron originally submitted plans to include Perez and former Councilwoman Renee Chavez’s names on the plaques. But Mayor Louie Lujan rejected the idea.

The plaques cost the city $1,467, according to interim City Manager Frank Tripepi. They include the names of current council, the developer and the architect.

Look for the story tomorrow….