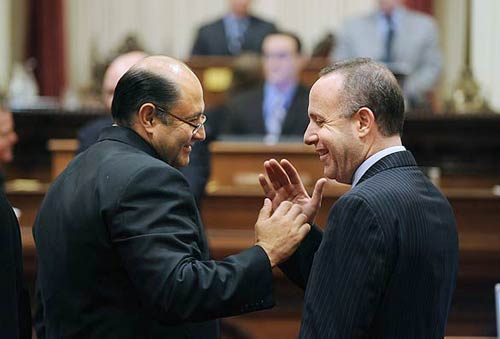 ….state lawmakers are at it again.

First they said they were close to a striking a deal that would close the state budget last week. Then they were expected to finalize plans tonight. Now, they are meeting tomorrow to have it again. Let’s hope they mean it this time:

Lawmakers’ optimism about finally reaching a deal to close the state’s $26.3 billion budget deficit on Sunday turned out to be wishful thinking as Gov. Arnold Schwarzenegger abruptly postponed talks.

Legislative leaders said they had been on the verge of bridging remaining pitfalls
that include how much money to borrow from local governments, whether to guarantee
that schools will be repaid money they lose during poor economic times and how much
money to save for future budget emergencies.

Instead, they spent Sunday blaming each other for a scheduling meltdown that pushed
the state’s massive budget problems off for at least another day. Schwarzenegger
rescheduled Sunday’s bargaining session with the Legislature’s four top leaders for
Monday.