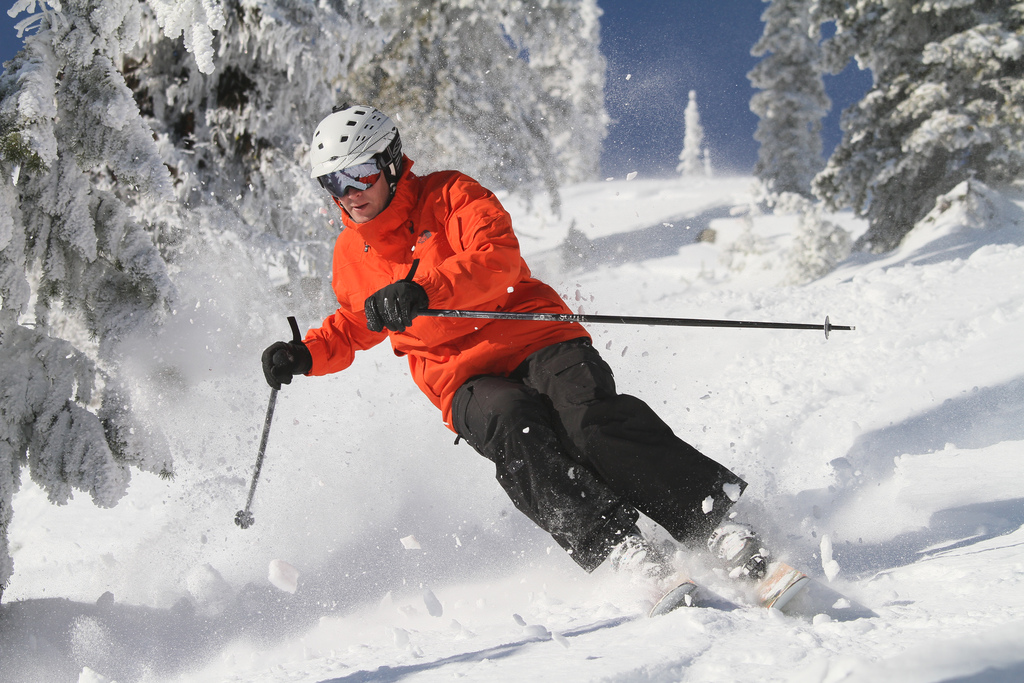 Many call it the last great undiscovered ski resort in North America. And with its latest expansion, Red Mountain certainly is poised to become one of the largest.

The British Columbia resort is adding another mountain and 1,000 acres of terrain. That’s on top of the two mountains and 1,685 acres that it already has.

“The scale of this expansion is a true game-changer for Red Mountain Resort and for the community of Rossland,” said CEO Howard Katkov. “The management team has spent the last eight years carefully reinforcing the company’s infrastructure, investing $50 million in the facilities and completing world-class slope-side accommodations. Now we’re truly ready for prime time. We’ve consciously kept a low profile while we diligently readied ourselves for this massive expansion.”

The addition of Grey Mountain alone is close to the size of Mt. Baker Ski Area in Washington. The total acreage will make Red larger than Jackson Hole, Wyo. And the resort will join the top 3 percent of North American ski resorts with 2,682 acres of skiable acres.

The Kootenays are already famous for the light, dry snow they get. Red gets more than 25 feet of light powder annually. Add in its 2,919 feet of vertical and you’re talking lots of steep and deep. Powder days are nearly every day at the ski resort located near Rossland, a scenic mining town in British Columbia. 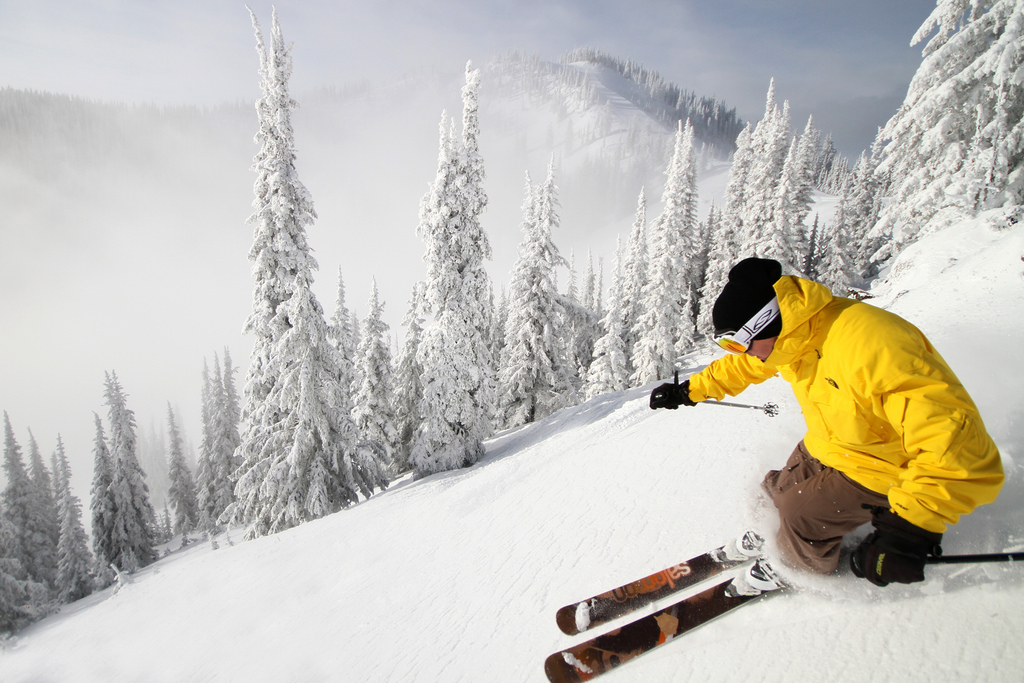 “Not only does the expansion increase Red’s skiable terrain by about 1,000 acres, it also adds wide terrain variety — from groomed cruising runs to tree glades and alpine chutes — that will create a whole new world for Red skiers,” explained Chris Cushing of Snow Engineering Group, one of the ski resort industry’s premier design firms.

“This project is one of the most dramatic transformations of an existing major ski area that we’ve seen and it is one of the largest — if not THE largest — single-season ski area expansion projects in North America in several decades,” Cushing added.

We decided to check out this hidden gem on a ski trip last year. It takes a little work getting to Red from Los Angeles, but it is well worth the effort.

First, we flew to Spokane, then jumped on a shuttle for a two-and-a-half-hour drive north across the border. Customs officials in Canada carefully checked our passports and questioned us about our ski trip. Be sure all your travel documents are in order or you’re not getting in the country, and you may be detained.

Fortunately, the route proved easy to follow with no major mountain passes to negotiate in the softly falling snow. Soon we made it to the base of the mountain, where we were staying in the Slalom Creek condos.

With five people sharing a four-bedroom unit, space is usually at a premium, but our comfortable condo was large enough that we each got a bedroom, with one in the living room. The living room had a very nice stone fireplace featuring a big screen TV and stereo.

The ultra-modern kitchen and dining room gave us a great place to share breakfast before catching first tracks at 9 a.m. It also gave us a place for lunch or dinner if we chose to come in off the mountain to warm up.

Slalom Creek is the newest, largest and closest lodging to the day lodge. It has earned four and a half stars from TripAdvisor.com. There are several other lodging alternatives, including condos and townhomes.

But we were there for the snow, so we had to go. Red and Granite mountains offer 88 marked runs. These break down 15 percent beginners, 40 percent intermediate and 45 percent advanced.

Though there are only six lifts this is misleading because Granite permits 360 degrees of skiing around the peak from a single lift. The same is true for the new mountain.

“Grey, like Granite, is volcano-shaped, which allows for 360-degree skiing from a single lift, a topographical feature few resorts in the world are lucky to have,” explained CEO Katkov.
Beginner skiers or snowboarders can learn on the magic carpet slope. Then they can hone their skills on the new beginner terrain off the Silverlode chair.

Beginners who want to ride to the top of Granite Mountain can take the Motherlode chair, then follow Rino’s Run or the Southside Road. It’s a very beautiful run.

Intermediate riders and skiers will love Paradise Basin. It has mostly intermediate runs, but skiers can still get to Paradise Lodge with green runs by taking the Silver Sheep trail.
Advanced riders will soon find out why Red was ranked as one of North America’s top 10 resorts for experts by Forbes Traveler.

Experts will find fall lines off Granite Summit that excite them but terrify the rest of us. Try Ledges, Jumbo or Powder Fields for great views, few trees and deep powder. There are also many challenging runs at the end of Buffalo Ridge in the Slides, Cambodia, Roots or Needles.

More double diamonds and a single black can be found off Ridge Road, including Coolers, Doug’s Run, Oil Can and Beer Belly. And you’re going to need a beer afterward, because these runs are extremely advanced. Don’t even try them without a buddy to back you up.
Red’s Rockstar Energy Terrain Park offers jumps, jibs, a permanent skier-cross / boarder-cross course, and park-wide sound system. A variety of rail features include kinks, a rainbow, flat downs, boxes, a battleship and street rails. New jumps, hips and XL kicker are also put in for this winter.

The famous Kootenay snow is champagne powder. The light powder is joy to plow through compared to some of the Sierra concrete we sometimes get.

This year, the resort has gotten 158 inches of snow since Oct. 1. The snow depth at Paradise Lodge mid-mountain was 80 inches the last time we checked.

And while the weather was brisk, I couldn’t wrap my head around the centigrade system so I didn’t really know how cold it was. It was about 23 degrees Fahrenheit at the lodge and 17 halfway up the mountain. 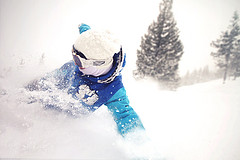 The lifts close at 3 p.m., 3:30 after Feb. 15. That may seem very early, but there are virtually no lift lines, so you’ll get in so much skiing that you will be tired by mid-afternoon anyway.

As for the new mountain, Red will be shuttling skiers, in groups of nine, to the top of Grey using a new snowcat — an oversized snowmobile-bus that has to be seen to be believed.
The resort bought a Poma Quad Chair for installation next summer. When completed, Grey Mountain will have 22 new runs, with lots of trees and terrain variations for everyone to enjoy.

“We see the Grey expansion as an expression of our commitment to the next generation of skiers and snowboarders, as well as to our current fans,” said Fran Richards, VP of marketing.

“We truly see Red as an endangered species, one of the last resorts that celebrates the true skiing experience: offering wide open terrain and all the amenities one expects, without the rampant commercialism that has significantly changed the face of the ski experience throughout North America,” he said.
richard.irwin@sgvn.com
626-544-0847