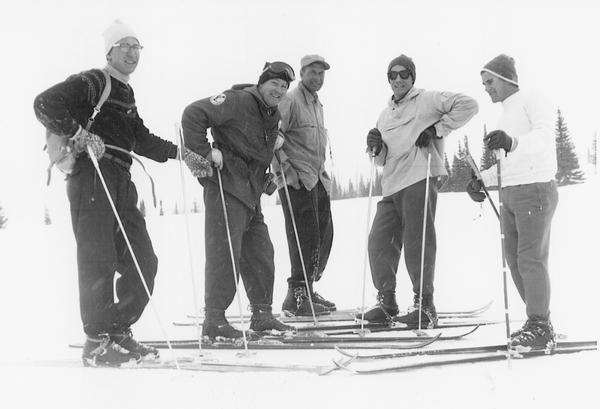 This classic 1958 photo was taken atop Storm Mountain, which became Mount Werner in 1964 and now is the top of the Steamboat ski area. From left are Jon Elliott, Jim Temple, John Fetcher, Buddy Werner and Loris Werner. (Steamboat Ski Resort photo)

STEAMBOAT SPRINGS — At first glance, perhaps it doesn’t look like such a special photo: five guys on skis posing at the summit of Storm Mountain in March 1958. But that shot taken by Merle Nash represents so much of what Ski Town USA and the Steamboat ski area — currently celebrating its 50th anniversary — are all about.

The men in the photo that day were exploring the mountain that would become a great ski destination known worldwide for “champagne powder.” It includes Jim Temple, the area’s founder, and John Fetcher, its other visionary. The others are Steamboat Olympians: Buddy Werner, the first great American ski racer, along with brother Loris, who made Olympic teams as a ski jumper and alpine racer, and jumper Jon Elliott.

It’s such a symbolic picture. Temple and Fetcher were ranchers in a town built on ranching. Both loved to ski and saw great potential in Storm Mountain, which would be renamed Mount Werner after Buddy was killed in a Swiss avalanche in 1964. The Werners and Elliott grew up competing at historic Howelsen Hill near downtown Steamboat Springs.

At a recent gala to celebrate the 50th anniversary, Loris Werner recalled how Temple fell and ripped the seat of his pants the day that photo was taken, near the bottom of what is now the Rainbow trail.

“So henceforth the saddle of Rainbow, we always referred to it as Temple’s Crotch,” Werner said.

Steamboat has to be America’s friendliest ski town, and I had a wonderful time at the party, catching up with so many longtime friends. Temple and Fetcher are dead, but their sons were there.

Jeff Temple told a wonderful story about accompanying his father on one of those mountain reconnaissance trips in 1959 when he was 5 years old. That was the year Buddy Werner became the first American man to win the prestigious Hahnenkamm downhill in Kitzbuehel, Austria. Werner was on the hike that day.

“He was the hero, the idol of the entire town,” Temple said. “Coming down off the mountain, I lost a tennis shoe and it started getting dark. I got to ride piggyback down on Buddy Werner, which was unbelievable for me to even touch the man. He was such an icon, such an idol.”

Jim Temple grew up on a ranch 50 miles northwest of Steamboat, learning to ski at age 2 on skis his father made for him. His family traveled to Steamboat annually for the Winter Carnival, which will celebrate its 100th anniversary next month.

Temple spent a few winters on the ski patrol in Sun Valley, Idaho. One year when Sun Valley closed and he went back to Steamboat, he noticed there was still plenty of snow on Storm Mountain, so he began to dream. Beginning in 1955, he explored the mountain on horseback, Jeep, snowcat and skis.

Temple formed the Storm Mountain Ski Corp. in 1958, and had a Poma lift in place in December 1960. The area has been in continuous operation since January 1963.

With an engineering degree from Harvard, Fetcher was the area’s vice president and chief engineer from 1959-62, then president from 1962-71.

“He would load up a load of cows, haul them to Denver and sell them to make payroll to run this place,” recalled his son, Jay. “That went on for seven years. Finally LTV came in, bailed him out, bailed out our ranch — our ranch was mortgaged to the hilt to run this place. He spent all his time here, because if this didn’t make it, our ranch would have gone.”

LTV was one of five corporate owners, with Intrawest the current owner. But the ski area never lost its soul, because of the people who make this a real ski town. Billy Kidd, the former ski racing great who is one of the most gracious men I’ve ever known, has been director of skiing since 1970. Kidd idolized Buddy Werner and raced with him in the 1964 Olympics.

“When I travel around the world, and people find out I’m from Steamboat, I get several comments — big mountain, great powder snow,” Kidd said. “But the No. 1 comment that comes up, whether I’m in Miami or New York or London or Tokyo: friendly people. Steamboat has the friendliest people.”