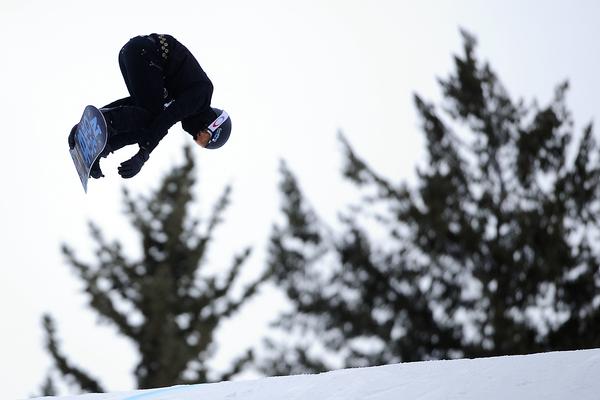 The top eight scores advanced out of the 16-man qualifying rounds. Both of White’s scores came on his first runs.

White was fourth after the first-round slopestyle run, which had a few hiccups, and scored just 67.33 points. By the time he started his second run, his first-run score had dropped to seventh, but that was still enough to get to the finals. He fell on the second jump in his second run and had to settle for seventh.

Defending champion Mark McMorris was solid on his first run with an 88.66-point run, and the Canadian teenager held on to the top spot going into Saturday’s finals.

“I was so glad to get the first one out of the way,” said the 19-year-old McMorris, who had talked of throwing a triple-cork in the qualifier but held off. “I’m feeling a lot more comfortable with the triple-cork.”

White dropped out of last year’s X Games slopestyle after the qualifier because of an ankle injury. He won slopestyle gold in 2009, sat out the event in 2010 to focus on the superpipe before the Olympics and didn’t make the 2011 finals after finishing 13th in the qualifier.

Breckenridge rider Eric Willett crashed on both runs Thursday and did not advance. Needing a solid run on his second trip, Willett fell on his third rail slide at the top of the course. Sebastien Toutant, the 2011 slopestyle gold medalist, did not advance Thursday, crashing on both runs.

In the ski superpipe qualifier, Aspen teenager Torin Yater-Wallace advanced to Friday night’s finals ranked second after qualifying runs Thursday morning, behind only Reno’s David Wise. Yater-Wallace, 17, was leading after the first trip with a 90-point run, but the 22-year-old Wise jumped ahead with a 92-point trip on his second time down. There were 16 qualifiers and eight advanced to the finals (best score out of two qualifying runs).

Tanner Hall’s comeback hit a stop as the 29-year-old finished 10th, and Telluride’s Gus Kenworthy fell on both runs to finish last. Veteran Simon Dumont, 26, made the finals, qualifying eighth with a 72.66 on his first run. The finals are 8:45 p.m. Friday, and each skier will have three runs.

The snowboard pipe qualifier opened with two Colorado riders in the 16-man field. Matt Ladley of Steamboat Springs advanced to the finals, while 20-year-old Breckenridge rider Brett Esser, who moved to Colorado from Iowa, crashed on both runs. Ladley, 21, had the second-best run in the first round, gaining 80 points and ranks fifth going into the finals.