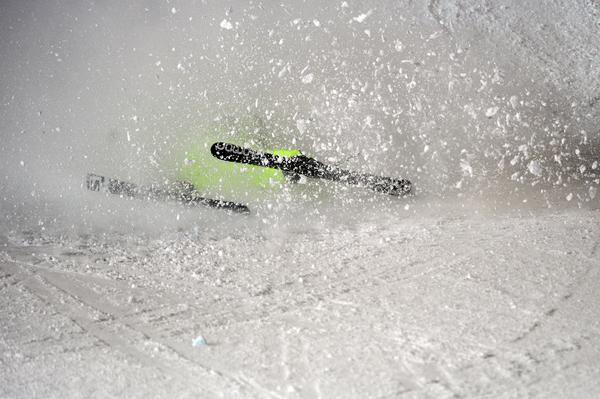 An airbag can help develop the body mechanics needed for, say, spinning 1,620 degrees while backflipping three times off a 100-foot jump. But it also ups the risk for athletes striving for glory in action sports now defined by increasingly technical and dangerous tricks.

“I guess it’s allowing for the sport to progress to a place it probably never would have been,” Bleiler said.

Still, not all athletes think hucking massive tricks into inflatable bags is the best way to develop.

Henrik Harlaut, the 22-year-old Swede skier who won X Games big air gold with the most stylish, technical tricks ever seen in competition, has never used an airbag.

“I only use snow. I always wait to try a trick until I really know that I’m ready to land on my feet,” Harlaut said.

An airbag requires athletes to land on their backs, forcing them to change their approaches when it comes time to land on snow.

“I don’t think — for myself — that’s a good way to practice because you learn your rotations to land on your back,” Harlaut said. “I’d rather just go to snow and just commit to it.”

Mark McMorris,the Canadian teenage snowboarder, won his second slopestyle gold medal Saturday with a bomber triple-cork 1260 that earned an X Games record 98 points. He says airbags are “pretty dangerous” and that he learned his trick on snow.

“I think airbags can put you into bad habits, but some people they work for,” said the 19-year-old whose triple-cork earned big air gold in 2012 but only silver in Friday night’s big air contest.

Elana Chase, the vaunted freeskiing coach at the Vail Ski & Snowboard Club, said an airbag helps with the final step in developing technique.

“You should have that trick 90 percent of the way before you take it to the airbag,” Chase said. “The majority of your work should have already been taken care of in the gym, on the trampoline, water ramps, watching other tricks and learning the mechanics and building up. It’s a great tool, but not the only tool.”