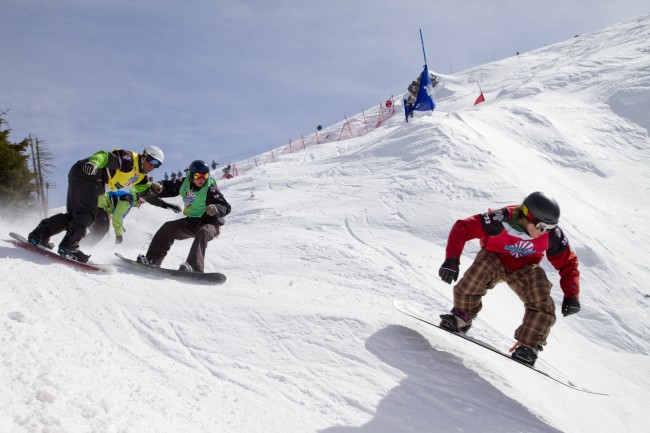 Kyle Coxon won the Super Final at the Rahlves Banzai Tour and John Bochenek took both the overall skier title and Sugar Bowl stop win during the final race of the tour on Sunday at Sugar Bowl Resort.

The Rahlves’ Banzai was held under sunny skies and soft snow conditions left over from a mid-week storm that dropped nearly 2 feet of new snow on the mountain. The Sugar Bowl stop was the fourth and final stop of the two-month race tour that had already run races at Kirkwood, Squaw Valley and Alpine Meadows.
At Sugar Bowl Resort, racers rocketed through the rock-lined, spectator-friendly Silver Belt Gully course, made famous during the original Silver Belt races of the 1940s. A mix of natural jumps, tight corners, and moguls made for spectacular crashes, tight passes and big airs during the finals and super final on Sunday.

Rahlves’s Banzai Tour organizer, Sugar Bowl Resort ski ambassador and skiing legend Daron Rahlves was unable to defend his Super Final crown because of a minor injury he suffered at the Squaw Valley stop of the tour. The Super Final field instead included Kyle Coxon, John Bochenek, Jesse Maddex, and John Lange. Coxon was awarded $5,000 for the win.

In all, $30,000 of prize money was handed out at the awards ceremony at Sugar Bowl Resort’s Judah Lodge.