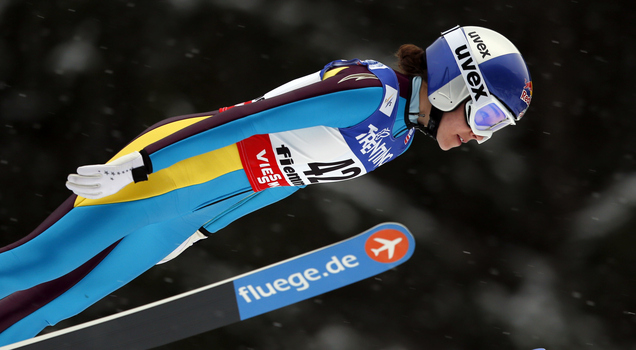 Sitting in her apartment over the summer, ski jumping sensation Sarah Hendrickson carefully eluded questions that presumed she already had secured a chance to compete for a historic gold medal at the upcoming Sochi Olympics in Russia.

“A lot of people say, ‘Of course you’re going to make the team,’ ” she said at the time. “But anything can happen.”

Of course, anything did.

Just weeks later, the 19-year-old reigning world champion blew out her knee in a training crash in Germany, throwing into doubt her ability to recover in time for an Olympics that will feature her sport for the first time — after a long fight for inclusion led by Hendrickson’s older teammates, all from Park City.

Hendrickson still made an appearance at the U.S. Olympic Committee’s media summit just a few miles from her home recently to say she remains hopeful she can do it, but she did so while wearing a knee brace, walking with a cane and occasionally getting shuttled in a wheelchair, with just four months until the Olympics.

“My goal right now is, in January, I’ll be jumping,” she said.

That would allow Hendrickson a chance to regain some form and confidence, maybe compete in a World Cup event or two.

But Hendrickson knows nothing is assured.

She knows there’s a chance her body won’t heal in time, despite spending six hours a day in physical therapy at the U.S. Ski Team’s Center of Excellence in Park City after performing some 12,000 jumps in her life.

Her trajectory is frightfully close to mimicking that of fellow Utahn Noelle Pikus-Pace, the skeleton slider who was the reigning World Cup champion and gold-medal favorite before a runaway bobsled broke her leg.

She tried valiantly, but was unable to recover in time for the 2006 Turin Olympics in Italy.

“Obviously I know that if my doctors tell me that I’m not ready or I don’t pass my testing results — stuff like that — and I know it’s a possibility, I won’t jump,” Hendrickson said.

Hendrickson was training on the large hill in Oberstdorf on Aug. 21 when she crashed, tearing her anterior cruciate ligament, medial collateral ligament and meniscus. All three were surgically repaired once she returned home from Germany.

She had just soared a personal-best 148 meters, suggesting she had hardly lost the top form that allowed her to beat 16-year-old rival Sara Takanashi of Japan at the world championships last February, after Takanashi had taken the overall World Cup title from her.

“It was pretty devastating, I won’t sugarcoat it,” Hendrickson said. “I was on such a good path. I was jumping so well, with some of the best jumps of my life. … That’s really hard. But you can only be sad for so long and then you have to pick yourself up and work back and fight against your odds.”

Takanashi went on to win the summer Grand Prix title for the second straight year, confirming that she must be considered the top choice to win gold in Sochi — even if American Lindsey Van playfully pointed to Hendrickson when asked who she regarded as the favorite.

“Time will tell,” Van said. “I would love for her to have the opportunity, and I would love to see her compete, so I hope she’s back in time.”

Van is a former world champion herself, who finished eighth in the overall World Cup standings last season after leading the battle to get the International Olympic Committee to add women’s ski jumping in the Olympics. Jessica Jerome finished right behind her in ninth. Both are all but certain to make the four-woman team for Sochi, with the winner of the U.S. Olympic Trials at the Utah Olympic Park on Dec. 28-29 guaranteeing a spot.

The other three positions will be determined by performance on the World Cup circuit by Jan. 19, though there is a provision that would allow Hendrickson to be added as a discretionary pick if she hasn’t competed yet.

But that’s a worry for another time.

Now, Hendrickson is just trying to do everything she can to be ready in time.

“In the beginning, it was very hard to stay positive,” she acknowledged. “Half of you, you just want to give up. But that is completely against my whole nature. Being in a sport like women’s ski jumping where we haven’t been included for so long, I mean, none of us gave up. We’re still here, we’re still fighting, and now hopefully we’ll get a chance to achieve our dreams.

“Things don’t go completely as planned always,” she said, managing a smile. “So you just have to fight back, stay strong and still strive for that goal that you have.”