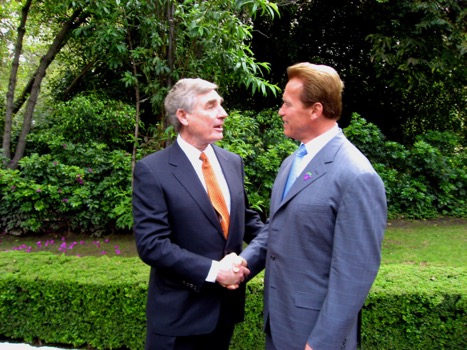 In his roles as manager of the Mt. Shasta Ski Area and, later, leading the California Ski Industry Association, Bob Roberts, left, has met with many movers and shakers. Here, he visits with Arnold Schwarzenegger in 1984, the same year the actor starred in “The Terminator.” Nineteen years later, Schwarzenegger would become California governor. (Courtesy photo)

After 40 years as the “voice” of California skiing and snowboarding, this is the first winter in decades without Bob Roberts as president and CEO of the California Ski Industry Association.

As chief strategist and lobbyist for the organization’s 29 California and Nevada winter resorts, the 78-year-old Roberts has played a major role in the development and success of resorts across the Sierra Nevada.

In a long-ranging interview, Roberts reflected on his many years at the helm and talked about what he sees in the future for the winter resorts.

“The drought,” he said, “is the biggest problem facing the resorts. People who own resorts tend to think that the glass is half full, not half empty. They are usually very creative and inventive in solving problems. But if the drought continues, we could lose a few resorts. There will be a shakeout, I suspect.”

In recent years, two Colorado-based corporations – Vail Resorts and KSL – have acquired major California ski resorts, including Heavenly, Squaw Valley, Alpine Meadows, Northstar and Kirkwood. He does not see that trend continuing and does not expect other out-of-state corporations to acquire and consolidate resorts in California or Nevada.

California ski resorts are a key component in the state’s tourism boom. Some 7 million skier visits to the resorts are recorded every winter. It’s a $1.5 billion business that generates more than $100 million per year in state and local taxes. Some 16,000 people work full-time and seasonal jobs at the resorts every year.

Roberts recalled that back around 1990 the state’s “economy was in the tank.” Gov. Pete Wilson called together representatives from hotels, restaurants, ski resorts and others in the tourism business and concluded that the state could use tourism to help re-energize the economy. 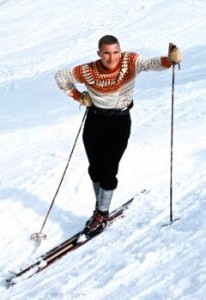 Bob Roberts on the slopes

Private interests and the state each kicked in $7 million to start promotional campaigns in the tourism sector. An organization was formed to push the efforts and Roberts was named its co-chairman. Over the years, that group morphed into Travel California, which now has an annual budget of $110 million.

“The ski industry,” said Roberts, “has had a big role in energizing tourism in California.”

Over the decades, the ski industry association has fought many battles with federal and state agencies and legislators over proposed rules, regulations and decisions that were not in the best interests of winter sports enthusiasts and the resorts.

Roberts noted that “we were one of the first groups that fought for cleaner cars. We worked quite successfully with the California legislature to reduce carbon levels from cars. Clearly climate change was happening and we could see the possible effects that that would have on winter recreation.”

Another long-term battle, he recalled, evolved over the Forest Service’s plan to rezone lands in the Sierra Nevada. While the agency was championing recreation over timber and mining activities, its plan contained a number of unintended consequences, harmful to winter sports.

One such case involved a large California resort that had become a breeding ground for pine martens. It was determined that the mating season for the little varmints started in February so a governmental proposal was made to close the resort in February.

That idea was defeated when the resort and association argued successfully that such action might well shut down the resort for the season since February is the heart of the ski season and generates considerable revenue for the resort.

Over the years, the ski industry association has had to watch out for the interests of the resorts on a year-around basis, not just in the winter.

Roberts said that “the larger resorts have stressed that they are in the year-around mountain recreation business, not just the ski business in the winter.”

In recent years, the resorts have added bike parks, zip lines, mountain slides and other attractions to lure summer visits. Other resorts, such as Boreal, have experienced major changes. Besides being a playground for skiers and snowboarders, Boreal has expanded with new facilities and is now a year-round training site for athletes.

Roberts got into the ski business in the late 1960s. After a stint in Peru with the Peace Corps, he and his wife Betty moved to Northern California where he soon found himself managing the Mt. Shasta Ski Area.

In those early days, you could get a lift ticket at many resorts for about $15. Today, skiers and riders pay just over $100 for lift tickets at many of the larger resorts around the country.

Roberts added that “some season passes used to sell for about $1,200. Now many early-season passes sell for $300 to $350. Half of all ticket revenues today come from early season pass sales.”

Skiers and riders, in effect, are gambling that enough snow will fall to enable them to get to the slopes often. They are sharing the risk of a good winter with the resorts.

Roberts, who lives in Mill Valley, had to give up skiing several years ago after two hip replacement operations. He is still quite an active guy and just published his first book – “Wish You Were Here: The Life and Times of Mike Roberts, America’s Postcard King.”

Mike, Bob’s father, had a 50-year career as a pioneering photographer and developer of color photography. He traveled the world shooting images of fascinating places and famous people, such as Albert Einstein and Amelia Earhart, and ended up being one of the world’s largest producers of postcards.