One last big April snow storm is expected to hit the Eastern Sierra this weekend. And up to 1.5 feet of accumulation is forecast at Mammoth Mountain through Friday and Saturday, thanks to its uniquely high elevation.
Spring skiing/riding will be going off at Mammoth through Memorial Day weekend, but for the powder purists, this is likely one of the last chances to enjoy some fluffy white. To help make make the most of it, Mammoth is offering a 3-Day lift ticket for $180 ($60/ day, for you english majors).
And there’ll be plenty going on at the resort this weekend, including the 10th annual Grenade Games and Syder, Where’s the party.

Mammoth Mountain Ski Area will be open for skiing and snowboarding through Memorial Day weekend. Officially the longest ski season in California, Mammoth will once again deliver some of the best spring terrain in the country.

With a 27-year streak of skiing and riding through Memorial Day weekend, Mammoth Mountain is committed to offering top to bottom terrain through late May.

“Although winter got off to a slow start, the past month brought a series of strong storms with nearly 100 inches of snow, and more in the forecast this week,” said Mammoth Mountain CEO Rusty Gregory. “With excellent conditions typical of this time of year, we look to continue our long-standing tradition of skiing and riding well into May.”

To celebrate, Mammoth has a jam-packed spring event calendar with all-ages activities on and off the hill. Events such as the JLA Banked Slalom, Mammoth Invitational, Grenade Games 10, Pond Skim and the annual Easter celebration are back in addition to new offerings like Spyder’s massive “Where’s the Party?” concert at Canyon Lodge.

Mammoth currently has a base depth of 4 – 6 feet and 100% of terrain open. A series of storms are forecast over the next week with 8-10” of new snow having fallen since early this morning. For the latest snow conditions, travel information and event details, visit http://www.mammothmountain.com/.

Mammoth reports the best skiing and riding conditions of the season and more snow is coming down with 8-10 inches of freshies on the ground already! The events calendar is jam-packed all the way through May.

The Mammoth Value Pass is your access to the 5,000-acre winter playground with unlimited skiing/riding at Mammoth and June Mountain all season long. Buy your pass starting 4/2/2014 for only $689 and start using it now.

When you do the math, it’s an incredible value – as many as 240 days of skiing or riding for the price of 7. On top of that, the pass offers discounts and benefits across the mountain.

The snow is piling up and skiers/boarders are having a blast at Mammoth Mountain.

With 3-4 feet of fresh snow on the ground this week (and more coming),  27 chairs and all terrain expected to be open, now is the time to come home to Mammoth. Grab your powder gear and join them

Stay 3 nights at any of the Mammoth Lodging Collection Properties and your 4th night is free.

Mammoth Mountain received 16 to 20 inches of new snow, and the resort has expanded open terrain with 20 lifts running and access to 129 trails, including the Face of Five and the Avy Chutes on Lincoln Mountain. The base depth on the mountain is now 25 to 35 inches and the conditions are great with packed powder.

The forecast shows more snow in the forecast this week so if you haven’t already, make your last minute Presidents Day plans to visit Mammoth.

We have special deals on lodging, dining, activities and retail.

It’s not too late to get your snow fix in! While other mountains have closed for the season, it’s still snowing at Mammoth Mountain.

They’re staying open through Memorial Day weekend conditions permitting. Sunny days and great conditions for skiing and riding what more could you ask for?

This deal is good for any day during the rest of this season- whether you come for a 3 day weekend or come 3 different days. 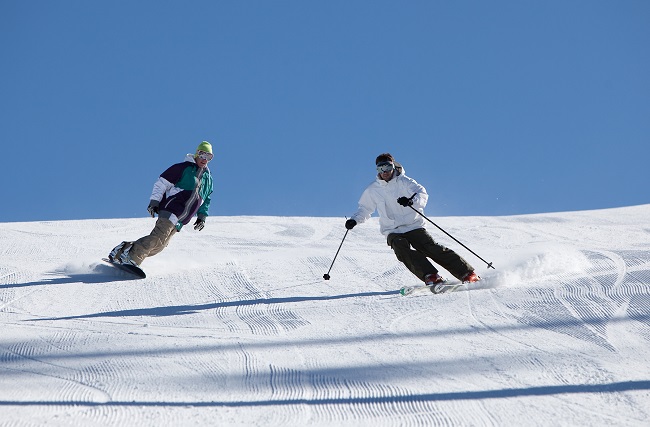 Skiing in the sunshine at Mammoth Mountain. (Photo courtesy of Mammoth Ski Resort)

This week in Mammoth Mountain was the first time I’ve actually had to pole downhill. Yes, that’s right – use my ski poles to propel myself down the mountain.

On Tuesday, bone-chilling winds at the summit hit 75 mph, according to mountain staff, and mid-mountain was not much better with strong 30-40 mph winds. The temperature at the top was a chilly 20 degrees.

The gondola to the summit was closed for three days and opened again on Thursday, though Chair 23, the other lift to the top, remained open despite the high winds. Whether that was a wise choice is debatable.

Those who ventured to the summit Tuesday and Wednesday described winds nearly blowing them over and being pelted unmercifully with ice. Skiing off the summit, they told me, was a scary experience.

Caitlin, a 20-something skier from Utah, was skiing Mammoth on Tuesday with her four friends and got caught off guard at the summit by a powerful gust of wind.

“It was so bad we all huddled together for about five minutes,” she explained. “We didn’t know what to do, which way to go. I felt like I was going to get blown off the mountain.”

Inga, spending spring break at Mammoth with her boyfriend and friends, called her one and only ride to the summit and ski down “an unfortunate adventure.” 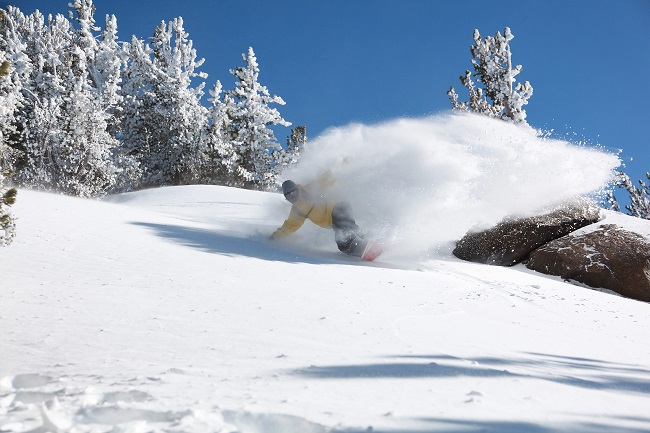 “The wind was blowing ice so hard that the ice hitting my helmet sounded like hail,” her boyfriend added. The San Diego couple did not plan on making a second attempt to the summit that day.

END_OF_DOCUMENT_TOKEN_TO_BE_REPLACED

Spring is in the air at Mammoth Mountain and they’re making it easy to take advantage of warm weather skiing/riding with an interesting temperature based lodging offer. From April 14 – May 23rd, The higher the temperature, the bigger your discount.

How it works:
Stay for 2+ nights in select units at any of the Mammoth Lodging Collection properties from April 14-May 23, 2013 and receive a nightly discount equal to the high temperature for the previous day.

Yep, that’s right, stay with us for at least two nights and receive a discount on each night’s lodging equal to the previous day’s high temperature, so if it’s 45 degrees both days, receive a $90 refund on your lodging upon checkout. Daily high temperature is based on the high temperature at Main Lodge recorded on the ski patrol website.

Book now!
You get it, now come up and enjoy the sun, after all…you’ll owe it one!
Book your springtime getaway now!

2 night minimum stay required. Rooms/prices based on availability and are subject to change without notice. May not be combined with any other offer or promotion. No refunds for early departures. Other restrictions may apply. Taxes & $20 per night resort fee and gratuities are not included.