*Playmaker Nick LaBrocca never looked like the dominant midfielder Chivas USA needed and with the club’s new found focus on its Mexican heritage he was finally swapped Tuesday in a much-discussed trade with the Colorado Rapids for UC Santa Barbara product Eric Avila.

The 25-year-old Avila has played for Dallas, Toronto and the Rapids since 2008, appearing in 96 regular season games and scoring five goals.

*Injured former Galaxy striker Edson Buddle (right knee) and San Jose midfielder Steven Beitashour (sports hernia) have left the U.S. National Team camp in Carson. No replacements will be called up ahead of the Jan. 29 friendly against Canada in Houston.

The entire draft is here.

Congrats to @jo3franco on being picked by Chivas USA in Supplemental Draft. Another Matador in the league. Hard work pays off. All the best.

@sfranklin5 Thanks bro!! Learn from watching the best! 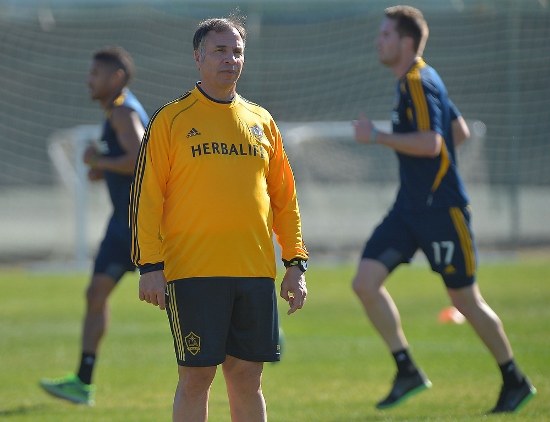 Galaxy coach Bruce Arena, above, remains unwavering in his team-building philosophy as change swirls around rival Chivas USA (still trying to restore fortunes to the succes of the Preki era) and MLS in general.

Read more in today’s column and a story by beat writer Phil Collin.

I’ll be back later today with an update on today’s supplemental draft. 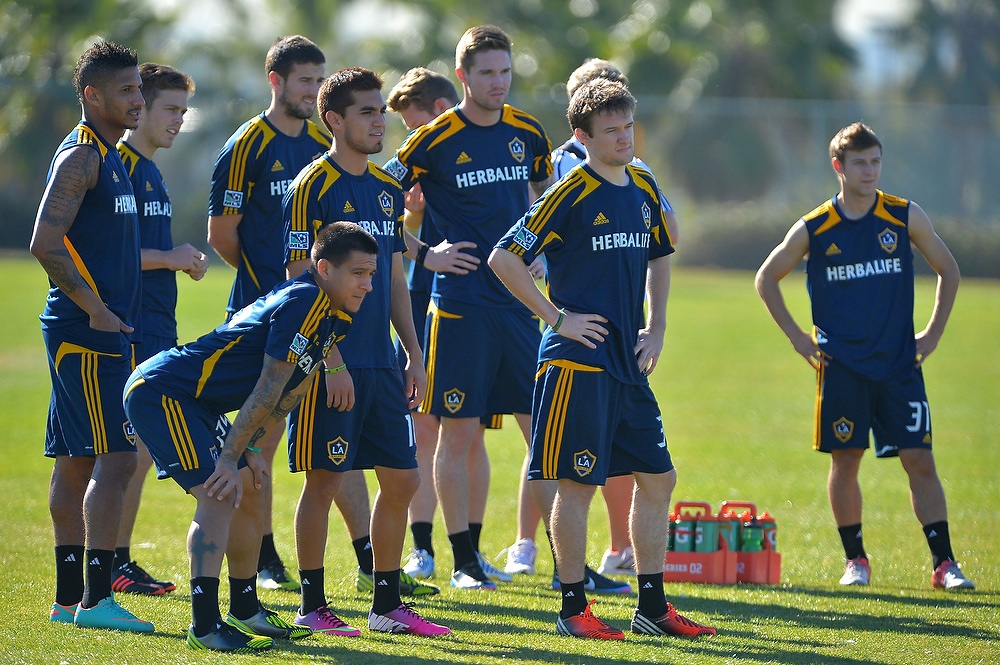 Galaxy regulars Sean Franklin and Michael Stephens (quick how many of the rest in this picture can you name?) catch a breather on the first day of training camp in Carson (Photos by Staff Photographer Robert Casillas).

Conspicuous by his absence as the Galaxy opened training camp Monday, playmaker Landon Donovan will nevertheless return in 2013 to fulfill the final year of his contract Galaxy coach and General Manager Bruce Arena told reporters today in Carson after training.

“We’ve given him a little bit more time off,” Arena said. “He’s definitely playing this year, we’re just working out the return date that made sense for all of us. We’re going to work out (the exact timing) soon.

“He just needs an extended absence,” Arena added. “The last couple of years (of almost constant playing year-round) have taken its toll. He just needs a little bit more time.”

Donovan wasn’t the only absence in the Galaxy camp.

In fact, there were 14 players out on the training field and 13 absent for one reason or another (congratulations, for instance, to the honeymooning Todd Dunivan, who is at some tropical locale with his bride).

Others were unavailable to reporters.

Former Chelsea and Spurs goalkeeper Carlo Cudicini did not venture out of the gym today, for example.

We’re still adding up who is and is not returning for the new season.

One who won’t is former UCLA playmaker Kyle Nakazawa of Palos Verdes Estates. The 24-year-old, who made two starts for the Galaxy last year, but was hampered by a back problem has retired, Arena said. 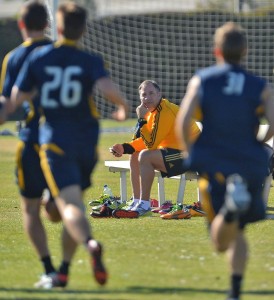 While Arena was contemplating his options on one side of Home Depot Center, on the other new Chivas USA coach José Luis Sánchez Solá – known by the nickname “El Chelís,” a common contraction of Jose Luis, I’m told, — had about double that number of players on the field including a bunch from CD Guadalajara.

Among the newcomers was Mexican-American midfielder Carlos Alvarez out of the University of Connecticut and a product of East Los Angeles, pictured below. 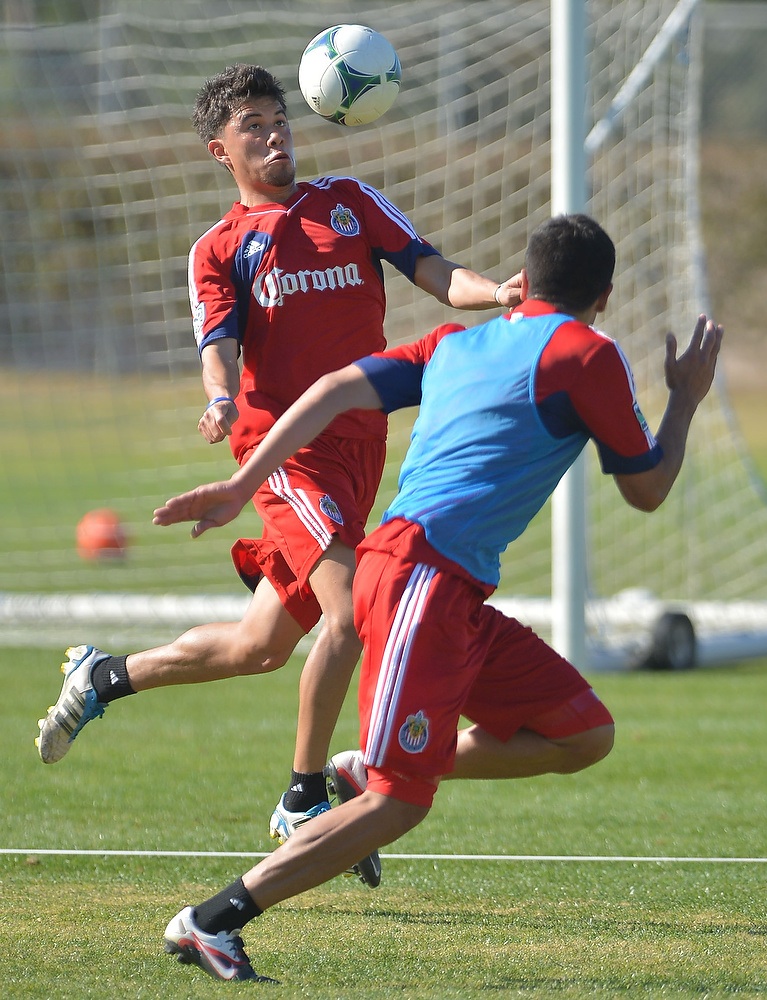 Brek Shea looks done in Dallas, Freddy Adu’s departure from the Philadelphia Union is sealed and Landon Donovan’s Galaxy tenure remains up in the air as the club opens pre-season training this morning along with the rest of the league.

Change is in the air for the supposedly established (who bought the idea of a DP from a soccer power – ahem – like Albania anyway?) and those looking to make their mark just days after their immediate future was decided.

Follow me on Twitter @LASoccerblog for more from the Galaxy and Chivas USA camps this morning, I’ll have more here later in the day and in Tuesday’s column. 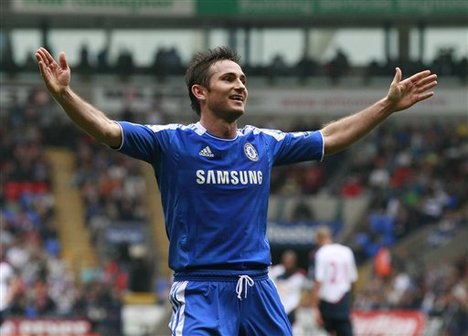 Speaking Frankly: Is Chelsea’s Frank Lampard on the way to the Galaxy? (AP Photo).

Just hours after Galaxy coach Bruce Arena took the unusual step of publicly acknowledging interest in unwanted Chelsea midfielder Frank Lampard, media reports have suggested the deal is all but done and could be announced shortly.

Arena rarely makes such a statement about an unsigned player, which lends credence to the theory the Galaxy have pretty much wrapped up the deal.

It’s somewhat surprising given that Lampard appears to have more left in the tank than David Beckham did when he arrived and the likes of Manchester United were supposedly also chasing him. Wouldn’t Lampard relish playing for Sir Alex and have the chance of sticking it to his former club, perhaps in the form of bringing another EPL title to Old Trafford?

Mind you given the snow in England today and the mid-70s temperatures in sunny Southern California, what Englishman wouldn’t want the opportunity to dump gray old England for warmer climes?

Perhaps we will find out more when the Galaxy open training camp at 10 a.m. Monday.

The Galaxy’s three picks in today’s MLS SuperDraft are Boston College forward Charlie Rugg, Michigan defender Kofi Opare (is he a potential replacement for Omar Gonzalez should the highly-rated defender get scooped up by a foreign club?) and Louisville’s Greg Cochrane.

Here’s video of Rugg in action:

In a conference call with reporters at an airport while he was waiting for a flight, coach Bruce Arena talked about the draft and player acquisitions in general.

The club is still seeking to add “one or two international players,” he said after confirming earlier in the day the team had spoken to representatives of Kaka and Frank Lampard. Also, neither central defender David Junior Lopes nor goalkeeper Josh Saunders will return to the franchise, he confirmed.

On Rugg: “Charlie Rugg is a player who is a second forward or a wide midfielder. We’re going to try him out wide right.

He’s got good speed and strength to run at players.”

Arena reiterated that he will meet with Landon Donovan this weekend ahead of the opening of camp Monday to determine his intentions: “I’m going to talk to him and see how he’s feeling physically, mentally and discuss how we are going to move forward.”

There wasn’t much suspense to Chivas USA’s 2013 MLS SuperDraft.

The club professed a desire to draft Mexican-Americans with its only draft pick.

Two prospects duly issued come and get me pleas.

And Chivas USA picked one of them.

Here he is in action at the recent MLS Combine.

The popular Brazilian midfielder with a ferocious shot previously announced the news himself, but the Galaxy confirmed today they have signed Juninho to a “multi-year” contract from Sao Paulo.

The seemingly tireless Juninho has played 87 games over three seasons with the Galaxy, scoring 13 goals and notching another eight assists. He was an MLS All-Star in 2011 and last year became the Galaxy’s all-time CONCACAF Champions League scorer with four goals in 10 games.

He’s also one of the most personable players on the team, always willing to talk — and increasingly in his ever-improving English — with a smile on his face, which reporters appreciate.

The Galaxy open training camp Monday with or without Landon Donovan, yet to announce whether he will grace us with his presence in MLS this year.

Also: Will Fox Soccer go away?