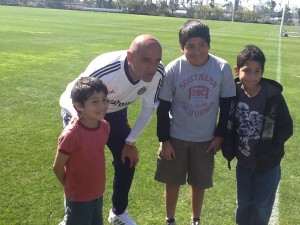 New Chivas USA coach Jose Luis Sanchez Sola is popular with fans now, but his continued popularity will rest on resurrecting the fortunes of the moribund club.

After last year’s poor start to the season — coach Bruce Arena Monday described it bluntly as a “mess” — the Galaxy stayed close to home for scrimmages and practices, never venturing out of Southern California.

The goal is to orient the team for the Galaxy’s fast start to the year, which will see it play its MLS opener Sunday and then resume CONCACAF Champions League play just four days later in Costa Rica. The schedule makers then kindly gave the Galaxy an early bye week to recover for the second leg of the regional tournament a week later, which comes just four days ahead of the first SuperClasico of the year against Chivas USA.

Still, without Landon Donovan and David Beckham the Galaxy’s early season form could well prove crucial to their fortunes this year:

“It’s important you try to keep you head above water instead of sinking,” Arena said. “I would not recommend starting seasons the way we did last year.

“We won’t pass as well,” he added. “We won’t be as dangerous in some ways, but maybe collectively we’ll be better.”

The Goats’ preparations for the season have been considerably more frantic considering the rebuilding job necessary to overhaul a last place team.

Chivas USA then remain very much a work in progress, although the club doesn’t expect any more additions to the 27-player squad before opening day.

“This is going to be a little more aggressive (of a style) toward goal and were definitely going to learn a lot about ourselves getting up and pressuring other teams,” club captain Dan Kennedy said.

For more on the Galaxy, Chivas USA and the start of the MLS season, read today’s column.