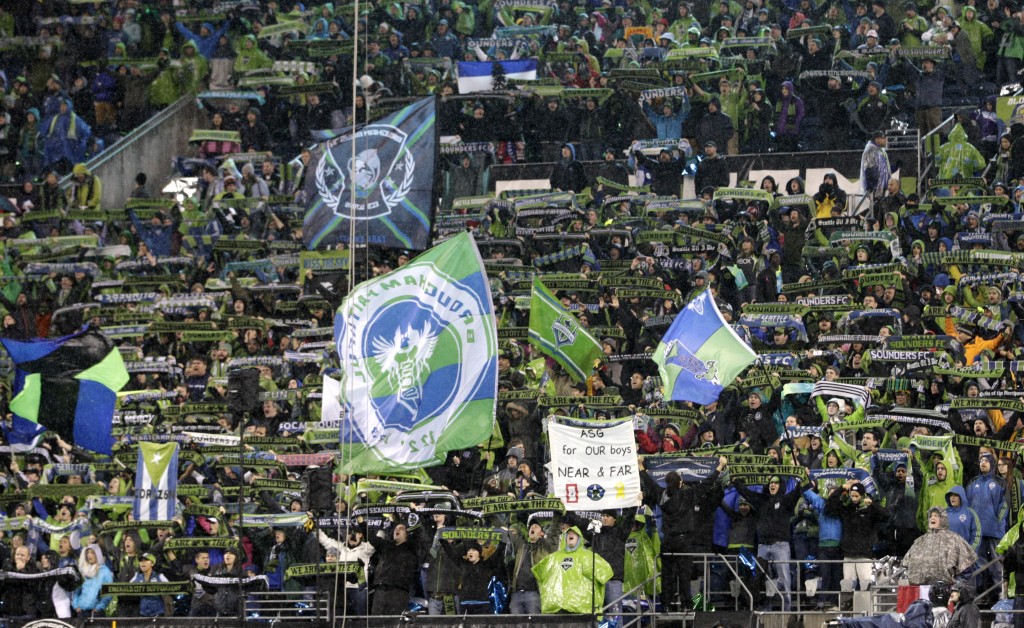 MLS Fan Frenzy: Supporters like these in Seattle are the reason the domestic game is surging in popularity (AP File Photo).

With no David Beckham or the buzz of a team expansion, the 2013 Major League Soccer season that begins this weekend might seem ho-hum because of its stability.

But this year begins a new chapter, focused on developing the quality of play and continuing to raise the profile of a league that officials hope will become among the planet’s elite within 10 years.

“There is no reason that in time Major League Soccer can’t be competitive with the world’s best,” MLS commissioner Don Garber said. “It’s going to take a lot of hard work and continued investment.”

That’ll be followed by a Canadian showdown with Vancouver hosting Toronto, Houston vs. DC United, FC Dallas vs. Colorado, Chivas USA vs. Columbus and Seattle vs. Montreal. Sunday, defending champion Los Angeles hosts Chicago, Portland welcomes New York and San Jose faces Real Salt Lake. New England has a bye the first week of the season, while Seattle, Los Angeles and Houston have byes in Week 2 while participating in the CONCACAF Champions League.

For the first time since 2005, expansion is not a story line.

After successful entries into Houston, Toronto, San Jose, Seattle, Philadelphia, Portland, Vancouver and Montreal, the league is standing firm at 19 teams. MLS wants its 20th team to be in New York, although there is an increased effort in Orlando that could eventually lead to the league filling a geographic hole in the Southeast.

“I think they remain a very good potential MLS ownership group and Orlando is an intriguing market,” Garber said.

Instead of expansion, the talk entering the season is investment.

The league announced Wednesday its intent to raise the quality of play and infrastructure to make MLS one of the world’s top leagues by the ambitious date of 2022. The goal was originally supposed to coincide with a successful World Cup bid. The U.S. won’t be hosting that tournament — Qatar will — but MLS is sticking with its plan.

There are other leagues taking notice of the improved quality in the league in recent seasons.

Four players — Brek Shea, Geoff Cameron, Lawndale’s Kei Kamara and Roger Espinoza — are all playing in the Premier League rather than the MLS. But the league is quick to point out its success in retaining many of its to  players and have some top American and Canadian players return from overseas to play in MLS.

While the depth of players is arguably at its peak, there are no obvious favorites entering the 2013 season.

The Galaxy starts the year seeking to become the first team to win three straight MLS Cup titles, but its squad will have a different look than the one that hoisted the title last December. Beckham is now at Paris Saint-Germain and it’s unclear how long before midfielder Landon Donovan will be ready to actually contribute. Donovan is expected to join the Galaxy at the end of March following a personal sabbatical away from the game, but two months of the season could be lost before he finally plays.

A slow beginning to the season didn’t dampen the Galaxy’s title hopes a year ago. Los Angeles got off to a miserable start, only to find its form mid-season and ended up rolling to a second consecutive title.

“Every year the league is getting tougher and tougher. It’s always hard,” Galaxy striker Robbie Keane said. “Last year wasn’t easy. We had a tough ride at the start of the season. Toward the end, the last few months of the season, we were great. If we continue to keep doing what we’re doing and everyone stays healthy, we’ve got as good a chance as anybody. But we know it’s going to be tough, as it always is.”

Seattle will enter the season with a roster still in flux thanks to the late acquisition of former All-Star Shalrie Joseph. Eddie Johnson reignited his career a season ago with 14 goals for Seattle and it may possess the most talented depth of midfielders in the league, but forward Fredy Montero is on loan in Colombia and defender Jeff Parke is now in Philadelphia. Seattle’s management has made clear its focus this year is on the MLS Cup.

The team getting little talk before the season begins was the best one a year ago.

San Jose rolled to the Supporters thanks largely to the Most Valuable Player season of Chris Wondolowski, who finished with 27 goals in the regular season, and returns most of its lineup.

Portland should be improved under new coach Caleb Porter, while Real Salt Lake was forced by salary cap constraints to make offseason changes.

In the Eastern Conference, Kansas City was hit hardest by player movement, losing both Espinoza and Kamara to Premier League clubs for now.

But KC also has one of the best defenses in the league and the majority of its roster back.

Columbus could be on the rise again thanks to striker Federico Higuain, while Houston is a two-time MLS Cup finalist that was undefeated in its new stadium last season.

DC United might have the most potent offensive attack in the East, led by Dwayne De Rosario.

New York underwent a significant offseason transition. Hans Backe is gone as coach, replaced by Mike Petke. Thierry Henry returns for his third full season while Kenny Cooper and Rafa Marquez are gone. Australia’s Tim Cahill will be in his first full season with the Red Bulls after signing last summer from Everton in the hopes of finally finding a postseason breakthrough.

“To have a preseason with this team, with a new coach, new players, it’s important I feel because to get the understanding because we’ve practically got a new working staff in the background and probably about six or seven new players,” Cahill said. “It’s basically a new
team. It’s something that spending these four or six weeks together is going to be important for the outcome of the season.”