The Galaxy will play the Carolina Railhawks for the second consecutive season after the NASL club beat the Carolina Dynamo Tuesday night to reach the third round if the U.S. Open Cup. Kickoff is at 4:15 p.m. next Wednesday in Cary, N.C.

Chivas USA, meanwhile, will face the LA Blues after the USL pro outfit downed the Ventura Fusion 5-1 in Fullerton in the biggest blowout of the night Tuesday in the knockout competition. Kickoff is at 7:30 p.m. Tuesday at Titan Stadium.

The important part of this equation for local fans: if the Galaxy win they will host the fourth round game 7:30 p.m. June 12.

You can read the weekly soccer column here.

Noted: I received an email today from U.S. Soccer observing that the Gold Cup is not precisely “utterly superfluous” as I wrote in today’s column given this April announcement. Point taken. Now it’s just mostly superfluous (and, of course, the Confederations Cup is so highly rated, too). Ahem.

In other news today:

In a spectacular public illustration of his desire for a spot on the U.S. Men’s National Team roster and his value to coach Jurgen Klinsmann ahead of upcoming friendlies against Belgium and Germany, the Galaxy’s Landon Donovan put on a show in LA’s 4-1 win  Wednesday over the Philadelphia Union.

The roster was released this afternoon (and Donovan was not on it).

A goal and two assists for #LAGalaxy ‘s Landon Donovan as LA score 4 in #Philadelphia. Yup, too bad he’s not ready for #USMNT yet (ahem).

Here’s what Donovan had to say.

The Galaxy plays the winner of the second round game between the NASL Carolina Railhawks and PDL Carolina Dynamo on the road in North Carolina May 29, while Chivas USA faces the victor of the LA Blues-Ventura County Fusion match-up on the road in either Fullerton or Ventura May 28.

With the Galaxy reportedly chasing the signature of Rolling Hills Estates’ Robbie Rogers Irishman Robbie Keane is set to return for LA against the Union today in Philadelphia (4:30 p.m. TWC).

It’s a game the Galaxy needs to arrest their recent decline in form, but the Union are wary.

There’s a romance to the under-appreciated U.S. Open Cup I’ve especially appreciated since watching obscure Roma FC lose to the Galaxy a few years back (wonderfully named and stylish midfielder Quavas Kirk scored the winner, if I recall, with a beautifully struck shot that was the highlight of his brief Galaxy career) at the HDC Track & Field Stadium, the LA Riot Squad boozing it up behind one net in a fenced off beer garden.

(And I’ve still got the red Roma T-shirt I bought for $10 the club were selling to finance their cup run).

So while I was occupied with far more mundane matters Tuesday night, the Ventura County Fusion were scoring twice in the last 13 minutes to come from behind in battling FA Cup fashion in the first round of the U.S. Open Cup and dispatch Agoura Hills-based FC Hasental.

Classic. And in the next round the Fusion plays the LA Blues (of Orange County) at 6:30 p.m. Tuesday at Titan Stadium.

Yeah, there were familiar names involved in games last night: the Sounders (whose David Geno became the stuff of cup legend with four goals in the U-23 teams’ win over Doxa Italia), Timbers, Red Bulls.

But there was the unfamilar, yet evocative, names too Tuesday that invoked the spirt of the tournament:

I could go on. Or you could just click here for a full run down of the night’s action. 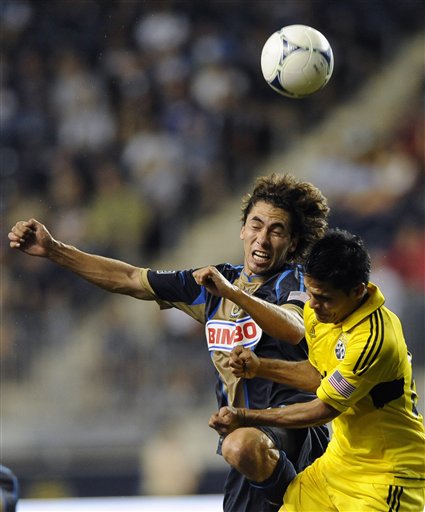 The Galaxy and Chivas USA both lost over the weekend, but that’s as far as the similarities between the two clubs go, as I write in this week’s column.

In related news, Chivas USA today acquired Cal State Fullerton product Gabriel Farfan, a midfielder out of San Diego, in exchange for their first round SuperDraft pick next year.

It’s debatable just how much of an impact the 24-year-old will have, however.

He made 43 appearances for the Union over three seasons, scoring one goal.

Too busy paying attention to mom rather than MLS action this weekend with both the Galaxy and Chivas USA on the road? We’ve got you covered:

[View the story “A mother of a weekend for Galaxy, Chivas USA” on Storify]