While the inconsistent Galaxy currently occupy the fifth and final Western Conference playoff spot, they are also only three points out of second spot.

Still, given their current form, explored in today’s column, who knows what their chances are of seeing those heights again.

Our sister newspaper The Denver Post has more on Mexico’s Gold Cup campaign.

Also: will this former Chivas USA import catch on with the Galaxy?

One clarification to the column about who the U.S. will face in the quarterfinals, according to U.S. Soccer:

The United States needs only a draw to secure a first-place finish in the group, which would mean a match against the third-place team from either Group A or Group B in the quarterfinal.

For the umpteenth time this season — well, OK, 15th — the Galaxy conceded yet another late goal and sucumbed to yet another defeat Saturday in Portland against the Timbers that squandered a valuable road point in what is becoming a sadly familiar problem as the Galaxy pointed out on their website:

“The goal is the 15th that the Galaxy have allowed in the final 15 minutes of matches and when LA give up a late goal, they’re a disappointing 1-7-2.  Add it all up and this propensity to concede late is the reason the Galaxy find themselves in the middle of the Western Conference table as opposed to challenging Real Salt Lake at the top of the table.”

The manner of the loss clearly angered Galaxy coach Bruce Arena after the fiinal whistle and, perhaps wisely, he refrained from further public comment with the club not including anything more from him in the quotes issued after the game.

The next crushing loss for Galaxy fans: Saturday against Vancouver in Carson.

At least the Galaxy’s Landon Donovan had a good day.

*Chivas USA hasn’t won in 13 games, but is unbeaten in its last three so it’s the latter streak they’re presumably seeking to extend, not the former against the Union in Philadelphia in a game that kicks off at 4:30 p.m. If you’re near Walnut Park a viewing party is planned.

Defender Carlos Bocanegra and striker Erick Torres could make their debuts for the Goats, while for midfielder Gabe Farfan the game represents a return to his former club.

*Hey, it turns out Mexico is still better than Canada at soccer.

*The U.S. is seeking to clinch a spot in the Gold Cup quarterfinals Saturday.

*To say there’s a bit of pressure on Mexico this evening in Seattle is a bit of an understatement give the team’s poor recent run of results. You can watch how this plays out at 7:30 tonight on Fox Soccer.

*Will Chivas USA provide a cure Friday for the wall Philadelphia Union coach John Hackworth is worried about?

*Caleb Calvert made history earlier this week when he became the youngest pro in Chivas USA franchise history. Well, today the Wrightwood resident was named the Western Conference U-15/16 National Player of the Year:

“Personally it means I have achieved something I thought I wouldn’t have accomplished in quite a while and I’m just shocked and amazed by it,” Calvert said. “Now I want to use this as stepping stone, move forward and get better.”. 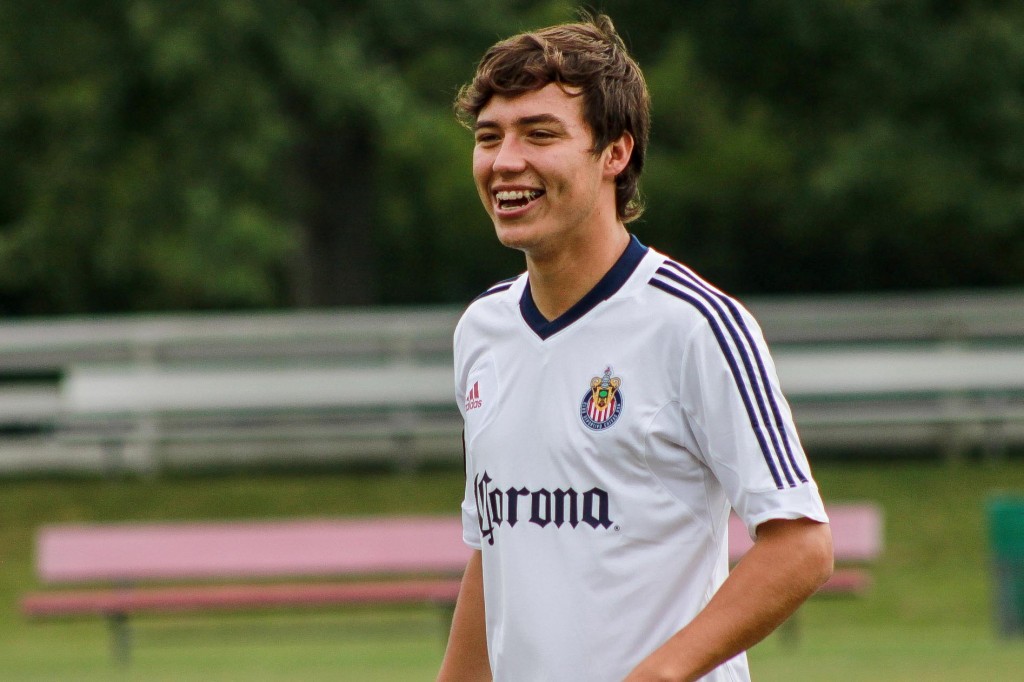 “Cubo,” as he is known, most notably scored a half dozen goals in 15 games in the 2011 Clausura for the mothership. He came up through CD Guadalajara’s youth system and made his professional debut in 2010 at age 17.

“Érick’s arrival is very important to Chivas USA as he will strengthen an area of the team that most needs it,” said Technical Director José Luis Real. “He’s a different and highly experienced player. He’s a young forward who made his debut at age 17 and who has always proven himself to be a player with a very bright future. Mentally he is very strong and positive, and that’s what we need in a center forward at Chivas.”

Torres, who will wear the No. 10 shirt, is awaiting paperwork and it’s unclear whether he will be eligible to play against the Union Friday in Philadelphia.

Chivas USA is at the bottom of the Western Conference and has scored just 16 goals this year, the second fewest in the league.

*The Galaxy’s Landon Donovan had a goal and two assists in the U.S. Gold Cup opener Tuesday, but wasn’t the biggest star for the Americans on the night.

*Casting director Lyle Dohl, who has worked on several TV reality shows in recent years. is seeking a local “underdog” soccer team for a new show:

“I’m working on a project right now for an immensely talented commercial director named Randy Krallman,” Dohl said in an email. “He has me looking for a charismatic coach of an underdog boys soccer team possibly best described as a “turn-around team” or a “worst-to-first place team”.  Or, if you like movie references, maybe a team like The Bad News Bears or in the 2012 Oscar Award-wining documentary Undefeated.  Essentially, a team that wasn’t picked to do anything but surprised everyone at the end of the season or tournament due to great coaching and hard work.  We’re mainly looking in the tri-county (LA, OC, Ventura) area but will definitely go farther for the right story.”

If you could do with a soccer update after the long holiday weekend, you came to the right place.

Here’s what you need to know to get caught up: The U.S. (and presumably Landon Donovan) opens Gold Cup play tonight against Belize (8 p.m. Fox Soccer) hoping to avoid the same fate as Mexico and Canada, which both went down to defeat in their tournament openers Sunday at the Rose Bowl.

Donovan scored twice Friday for the U.S. in a Gold Cup tuneup in San Diego that turned into a rout of Guatemala.

On the same day, the resurgent Galaxy were celebrating both a victory and their ascent up the MLS standings, while Chivas USA were ruing yet another game that got away from them to extend their misery.

And, no, since I took a little vacation myself this weekend, no column today, although it will return next week. 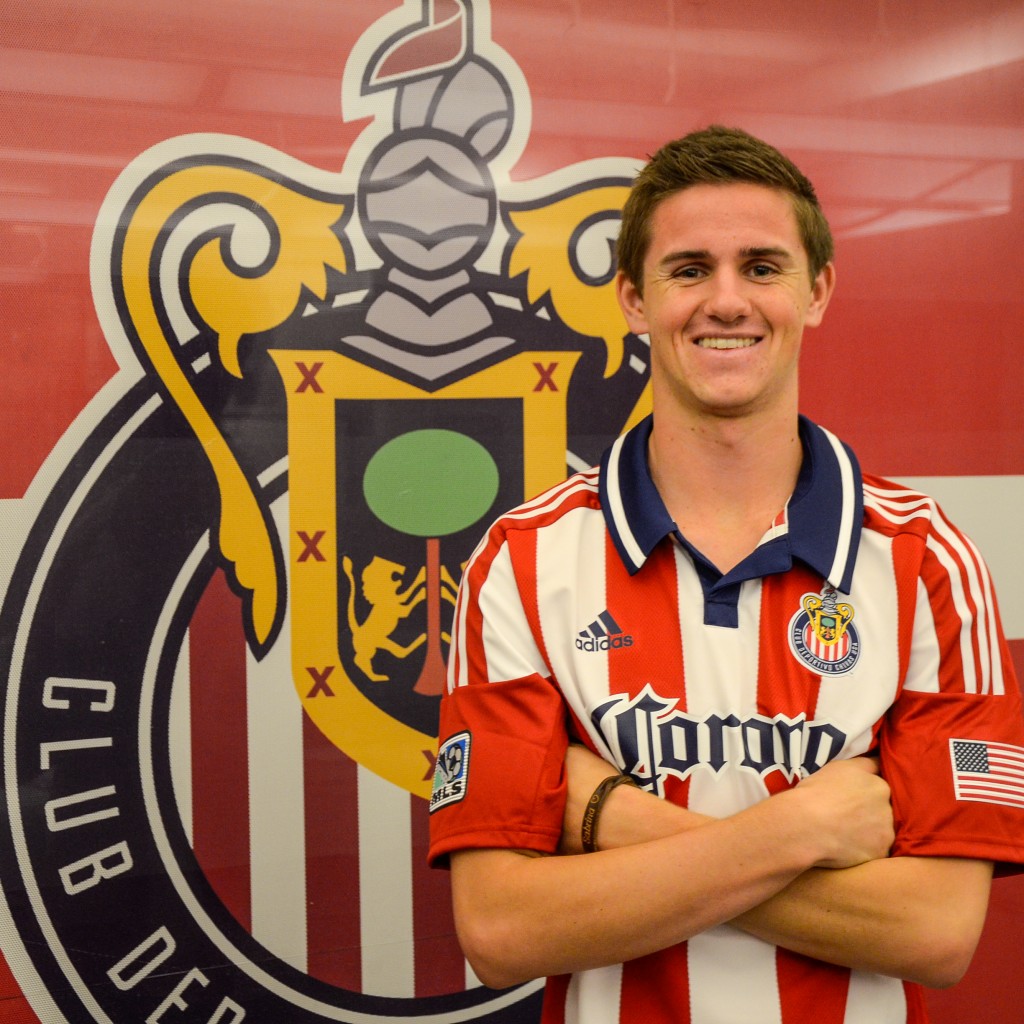 Calvert, who is eligible to play in Chivas USA’s game Sunday in Montreal, was the leading goal scorer in the nation in his age group in the Chivas Academy with 22 goals, firepower the struggling club could put to good use in MLS despite his age. Especially since his nickname is apparently “Rooney.”

“I’m beyond thrilled.” said the resident of the San Bernadino Countuy community of Wrightwood. “I never thought this moment will come this soon and this fast, but I’m living my dream right now, and it’s the most incredible feeling anyone can have. Hopefully I get adjusted and comfortable soon and from there I can start playing my game and doing what I do best, scoring goals.”

“Our Youth Development Program is extremely happy for Caleb to step up and move to the next level,” said Chivas USA’s Youth Academy Director Sacha van der Most. “I think it’s well deserved as he has proved himself at the U16’s and U18’s levels this whole year and also by stepping up in the Reserve League games.”

Trivia, via the club: Before Calvert, current Chivas USA midfielder Marco Delgado, who just earned two starts in the last two games for the Goats, was the youngest player to sign a professional contract at 16 years, 10 months and 17 days.

There was no celebratory cartwheel.

No trademark faux six-shooter was brandished in a familiar victory salute in the wake of the winning LA Galaxy goal.

A suddenly businesslike Robbie Keane simply stood to acknowledge the importance of converting the penalty kick for the winning goal – his second from the spot in the final eight minutes of the game for a come from behind Galaxy win – if not the manner in which it was scored.

Because Keane clearly dived to secure the call, as the Columbus Crew pointed out to no avail, while Keane’s muted reaction and words after the goal spoke volumes:

“After the result on [Saturday] it’s important to get a win, no matter which way we did it,” he said. “I’m looking at the ball and someone comes into the back of (me). If someone runs into the back of you without you knowing the fact is you’re going to fall over.”

As he said, he did what he needed to do to secure a win for a frankly substandard (yet again) Galaxy team that outplayed a poor Crew, but once again failed to put them away until Keane belatedly sealed the victory.

But the reality is, he dived, cheated if you like, because if he hadn’t the Galaxy would have left StubHub Center without a victory.

Next up for the Galaxy, FC Dallas at home Sunday, a team that played to a scoreless draw with Chivas USA on the same night.

Meanwhile, Galaxy playmaker Landon Donovan is under the spotlight tonight in San Diego for the U.S. national team in a friendly against Guatemala that will also feature Los Angeles native and former Galaxy player Herculez Gomez. 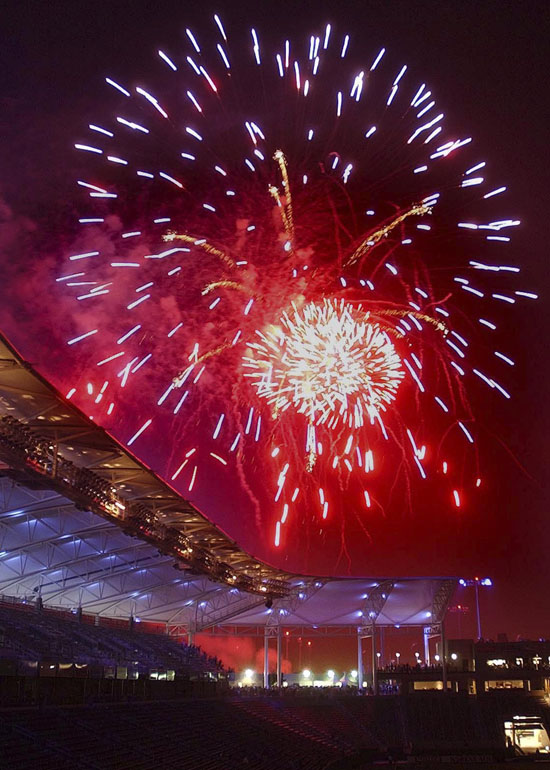 It’s an incredibly busy long holiday weekend of soccer action in the area, but I will take the Fourth of July and beyond off for what I believe is the first time since the former Home Depot Center opened in 2003, which means no column Tuesday either.

While I will add links to this blog post when I’m not clutching a cold beverage, posting will be even more spotty than usual on a holiday weekend.

Before I go there’s time to note that:

*Four goals in four MLS games since joining the Chicago Fire has earned former Galaxy cult figure Mike Magee the MLS Player of the Month award. The MLS leading scorer led the Fire to an unbeaten 3-0-1 record in June since joining the club May 25. In contrast the Galaxy lost four games last month and only managed to beat lowly Chivas USA.

*The Galaxy have a chance to improve on that record with their annual Independence day game that features opponents the Columbus Crew, the former club of Rolling Hills Estates’ Robbie Rogers, who replaced Magee on the LA roster.

*If you’ll be in San Diego for the holiday, check out the free U.S. national team training session open to the public ahead of Friday’s 8 p.m. friendly against Guatemala. Gate H at Qualcomm Stadium opens at 4:30 p.m. Thursday for the public.