World Cup qualifying results could not have fallen into place better Tuesday for the Americans, which earned the best result over Mexico since the 2002 World Cup and the right scores in two later games that enabled the U.S. to first qualify for Brazil with two games remaining and then leapfrog leaders Costa Rica to go top of the group.

Reinvigorated U.S. stars Landon Donovan and Eddie Johnson grabbed the goals and the glory, with only striker Clint Dempsey faltering slightly under the spotlight’s glare, missing a second half stoppage time penalty that would have made the scoreline even more emphatic.

“We’ve always said that Landon is an important part of our team,” Klinsmann said of the Galaxy playmaker. “The things that he went through were his decision. We were totally fine with that, but he also had to understand that he wasn’t getting anything for granted. He had to work his way back, to fight his way back, and that’s what he did. In the Gold Cup to start with, and now coming here, he understands the message that nobody has a spot guaranteed.

The stricken faces of the Mexicans Tuesday said it all, out of ideas tactically and wilting mentally under the pressure and expectations of a rabid nation, while the Americans added grit and determination to bright endeavor and execution. This isn’t a team, it’s a system, with squad members fulfilling role coach Jurgen Klinsmann demands despite the absence of such regulars as Jozy Altidore  and Michael Bradley.

“They were understandably under a lot of pressure,” Donovan said of El Tri. “We knew that if we kept the game at zero or we were ahead, it was going to play into our favor. Once we got the goal, we could see in their eyes it was going to end in a victory for us.”

It was a magnificent evening watched by more viewers in the U.S. on ESPN than any other World Cup qualifying game in history that represented another major step forward for the sport domestically and internationally. And Carlos Bocanegra et al were happy in Upland, too.

Had Mexico staged the game, 110,000 crazed El Tri fans would have crammed into daunting Azteca. Instead the U.S. opponents got a taste of their own medicine, delirious U.S. fans standing the entire game in much modest 25,000-capacity (or so) Columbus Crew Stadium.

It was an environment that at once exemplified the game’s gulf in popularity in the two nations, but also the spirit and emerging skill of the upstart, underdog Americans who once again proved it has Mexico’s number in games that really count.

“Step-by-step, we’re getting closer to taking the game to the opponents,” Klinsmann said. “We’re not sitting back and reacting to what happens. We want to take it into their half. Every game is different. We know that, too, but I think we’ve made big progress in terms of tactical variation and in terms of commitment both ways of the game offensively and defensively.

“The players know what we expect tactically. The players know there’s another guy behind them in every position, that if he doesn’t give everything he has the next one comes in and steals his spot. Therefore, there’s more competition and I think if you look at the entire picture they can be really proud of themselves.” 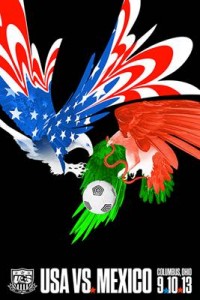 The U.S. could qualify for Brazil if thing go right for the Americans in Columbus, Ohio tonight, while Mexico’s World Cup hopes hang in the balance.

Game essentials are here, while more facts and figures are here.

Want to watch with other fans?

Former U.S. international defender Carlos Bocanegra hosts a viewing party in Upland at The Arena, while there’s another in Long Beach at Shannon’s on Pine.

I’m off on a few days vacation. Enjoy the rest of the holiday weekend.