Galaxy beat writer Phil Collin was at the gam,e and filed this report.

I’m heading out of the office for a few days.

Phil will have more on Sunday’s game against the San Jose Earthquakes later.

If you’re still reeling from the last minute, last gasp drama of last night’s regional World Cup qualifying games (you’re welcome, Mexico), take a deep breath as we return to the comparatively calm waters of MLS tonight when the Galaxy take on the flailing Montreal Impact at StubHub Center.

The visitors are losers of three straight home games and are winless in five, yet the banged up Galaxy (will Juninho return?), edging toward a playoff spot, are unlikely to feel much of a sense of superiority against a team they have met just once (and never in Carson).

Montreal received a boost Tuesday with word their designated player will stick around for another season, but it’s this one that still hangs in the balance for both teams.

The Galaxy can’t afford to look past Montreal at this stage of the season especially with a much-improved San Jose lurking in Sunday’s home finale.

The U.S. completes World Cup qualifying tonight, while Landon Donovan remains a doubt for the Galaxy’s next two games Wednesday against the struggling Montreal Impact and Sunday against the Earthquakes. 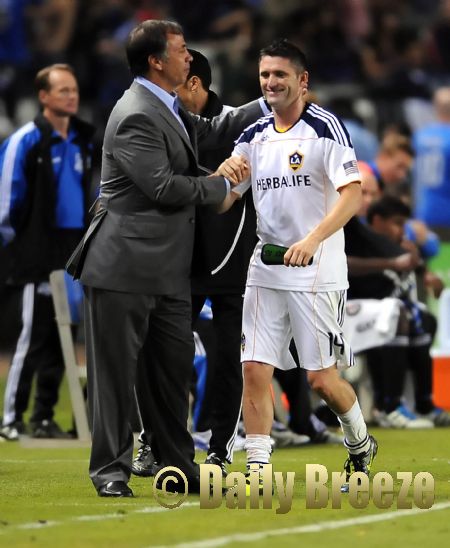 The Galaxy could have dominating defender Omar Gonzalez available Wednesday for the StubHub Center showdown with the Montreal Impact and coach Bruce Arena has reportedly attempted unsuccessfully to prise top scorer Robbie Keane from Ireland’s clutches for the game, too, if that nation’s slim chance of World Cup qualification goes south Friday against Germany.

Gonzales, you’ll recall, pulled out of the U.S. squad earlier this week.

If anything, the Montreal game is looming as even more pivotal after the Western Conference playoff race tightened still further Wednesday with Seattle falling to another humiliating defeat against regional rivals Vancouver and San Jose beating Colorado to set up a crucial Oct. 20 game against the Galaxy.

Incidentally, Keane was asked after last weekend’s SuperClasico about the chances of him returning early from national team duty for the Montreal game should Ireland stumble against the Germans.

“We definitely need a miracle,” Keane said of Ireland’s chances while dismissing the suggestion he might return early. “It’s nothing to do with me. I’m called up for international duty and I have to go. That’s a question you’re going to have to ask (the Galaxy) and the country. As far as I’m concerned I’m going to play for my country. … I’ve never shied away from that.”

By the way, the Galaxy clinched the MLS Reserve League title earlier this week with a win over Chivas USA, which will keep busy over the weekend with a behind closed doors game against New Zealand, which is tuning up for a World Cup playoff game against CONCACAF opposition.

The touchy subject of parents’ sideline behavior in youth sports will be discussed on the Hallmark Channel‘s daytime talk show “Home & Family” at 10 a.m. today.

No surprise there especially for those who went through the Messi & Friends debacle earlier this year..

Not a single ticket had been sold for the charity tournament scheduled to start Wednesday at Citrus College and continue this weekend at the LA Memorial Coliseum with four games involving Mexico’s Queretero among other teams.

The official reason for the postponement is that it was “due to a combination of logistical and scheduling matters.”

From a Chivas USA press release:

In their attempt to reorganize this event, the organizers will seek to bring the mentioned teams together again in an international tournament at a date and venue yet to be arranged

The MLS schedule takes a break this weekend for the final qualifying rounds of the 2014 World Cup in Brazil.

The U.S. play their final two qualifiers, although they are already through to Brazil, of course.

More on the U.S. status is in this week’s column, which was written before the Galaxy’s Omar Gonzalez withdrew from the U.S. roster this morning because of a strained hip sustained in Sunday’s SuperClasico. The injury could be a blessing in disguise for the Galaxy: it means the dominating defender could be available for next Wednesday’s visit by the Montreal Impact.

Michael Orozco replaces him on the U.S. squad.

A goalkeeper-less XI of players have appeared for both the Goats and the Galaxy in a SuperClasico, according to Galaxy stats whiz Justin Pearson.

The game not only had five goals, but Hawthorne’s Gyasi Zardes had the kind of game he has hinted at all year, Landon Donovan reached yet another MLS milestone and Dave Sarachan went 2-0 as Galaxy coach (ahem).

Staff Writer Phil Collin has the details ahead of the international break. 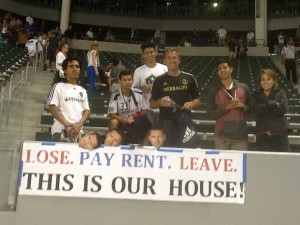 Colorado’s slaughter of Seattle Sunday has left the Galaxy hanging grimly on to a playoff spot by the slimmest of margins and made a victory in today’s 2 p.m. derby in Carson imperative if LA are merely to keep pace in MLS, as beat writer Phil Collin reports.