Phil Collin filed the game story headlined by the triumphant Landon Donovan who yet again demonstrated a flair for the dramatic in his timing and performance.

Notable: Donovan scored 104 of his 136 regular season goals for the Galaxy, the remainder for the Earthquakes. He now has 120 regular season MLS assists, including 91 as a member of the Galaxy. Donovan tied Cobi Jones (91 assists) for the most assists in club history and is now 16 behind Steve Ralston for the most in MLS history.

“Candidly, I’m exhausted. I won’t lie. I took a long nap today. I’m exhausted. I’m glad today’s done. I’m glad the record is done. My goal now and my challenge is don’t stop playing now. We aren’t even half way through the season. We’ve won a couple games. And now, we have two more games until the World Cup game. We feel should win both and we need to win both. That is our focus now. It’s going to be difficult. Chicago is a much improved team than their first couple of games. The Chivas game will be difficult. That’s my goal—to help us win those two games.”

The Galaxy play in Chicago Sunday against the Fire before returning home to face Chivas USA the following Sunday.

Enjoy the exhilarating videos of the game and all his best MLS goals: 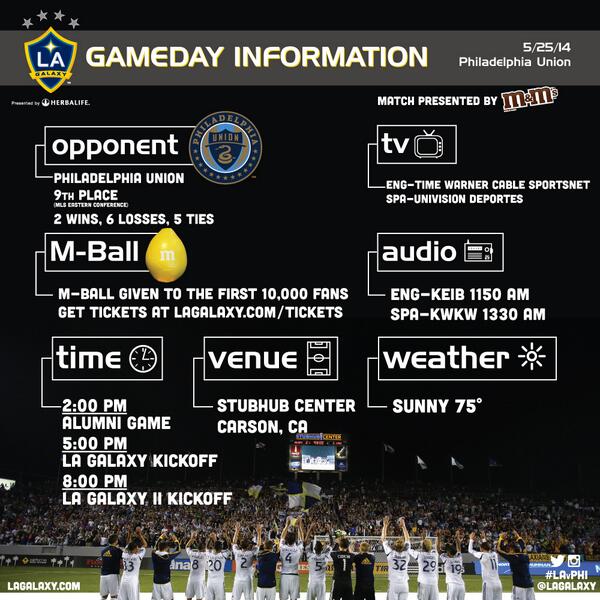 Take a snubbed Landon Donovan with a point to prove, a vulnerable Philadelphia Union and a home stage with an empathetic crowd willing on the best player the nation has ever produced and you have the perfect combination of elements to suggest MLS history will be made this afternoon in Carson.

Landon Donovan, need we say yet again, needs just one goal to become the all time MLS goal scorer. Who would bet against him today?

Beat writer Phil Collin will be on hand to follow the action this afternoon for what is actually a triple-header (details in the Twitter stream to the right or bottom of the page on an iPad) in Carson.

*All the stats are here.

And, yes, you want to get to the game early: 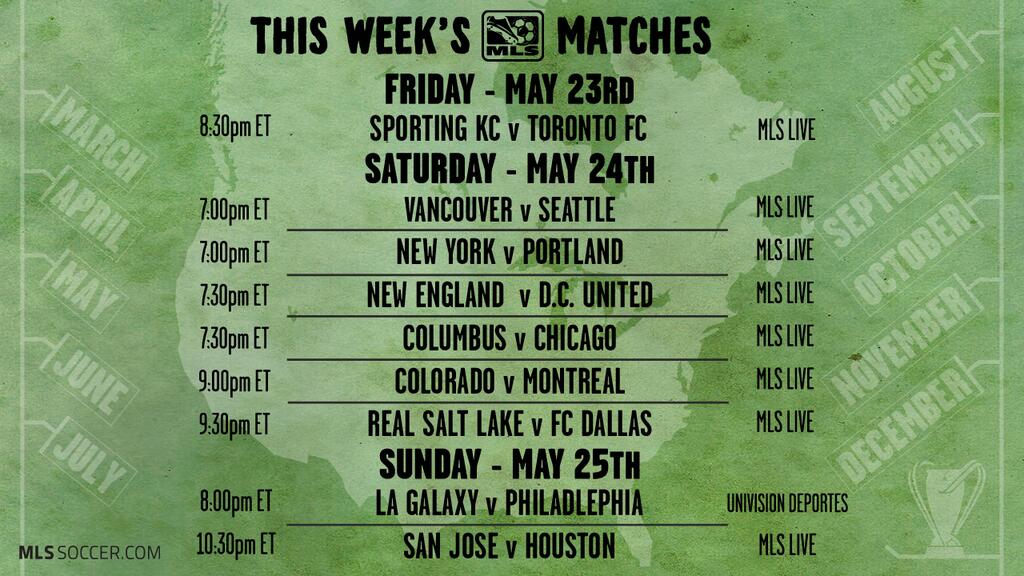 MLS beat writer Phil Collin will have all the Galaxy action Sunday from Carson, while I take the long weekend off. Phil will also listen to what Galaxy playmaker Landon Donovan has to say after training today and will have a report here later.

That is the fear. Brings a whole new meaning to the Group of Death, doesn’t it?

Read the hype from Hollywood here. 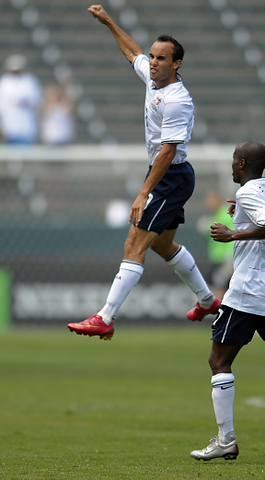 The social media reaction to Landon Donovan’s omission from the U.S. World Cup squad focused on coach Jurgen Klinsmann rather than the LA Galaxy star.

Unscientific, but still telling polls, show the majority of American fans do not agree with the decision.

And yours truly weighed in with this blog post, in case you missed it.

Here are several longer opinion pieces on the decision.

*This writer calls it “horrible.”

*In contrast, this writer applauds it.

*Sports Illustrated provides context given the “rocky” relationship between Klinsmann and Donovan.

Klinsmann’s possible logic? “If LD not at WC, USA may be taken so lightly we can surprise other teams and advance!” #USMNT

In case you missed it, here’s Jurgen Klinsmann’s press conference this morning where most of the questions were, not surprisingly, about Donovan:

Landon Donovan’s stunning exclusion from the U.S. World cup squad has nothing to do with soccer.

It’s about power and control.

To assert his dominance over the squad, U.S. coach Jurgen Klinsmann needed to get rid of the most influential, the most creative, the most talented player the U.S. has ever seen. So he did.

Read between the lines in the various reports summarizing the relationship between Donovan and Klinsmann and it’s clear it was not healthy.

Klinsmann wasn’t impressed by the central figure in his team thumbing his nose at the sport, the national team and the American soccer establishment by taking a sabbatical Donovan had described as necessary for his mental health.

He was unimpressed with the contained, reserved Donovan he believed failed to visibly display the fire the sideline-cheering Klinsmann wanted to see.

And Klinsmann wanted his own man captaining the team, not a holdover from previous incarnations.

That’s why the likes of Timmy Chandler, despite his apparent reticence to cast his lot with the U.S. national team, was cajoled to return to its ranks.

And that’s why Donovan, despite maintaining his role as a pivotal figure on the team upon his return, had to produce blinding displays (see above) to demonstrate his worth to a coach clearly looking for reasons to cut him.

This was a political decision, not a sporting one. And Klinsmann knows it.

Which is why he doesn’t speak directly to the media, but instead has a canned statement distributed to various outlets laying out the supposed weak rationale that other players were ahead of Donovan in unspecified ways.

Klinsmann recently said he didn’t consider Donovan a midfielder, but a forward.

Which is a handy way of providing a justifiable backdrop to his decision. Thirty-something forwards are not exactly in the prime of their international careers, while midfielders still can be.

This kind of political maneuvering is one reason Donovan needed a break from the national team. And why he may not return even if Klinsmann asks because of injury issues to players who were picked to go to Brazil. And why Donovan may well be so sick of the entire thing I wouldn’t be surprised to see him walk away from the sport and hang up his cleats at the end of the season.

The U.S. chances of progressing beyond the group stage in Brazil was already a long shot with him in the team. Now that opportunity seems even less likely.

Klinsmann and U.S. Soccer may well know that and have an eye on 2018 so this tournament can provide experience for younger players who unlike Donovan will be around four years from now.

But they underestimate public opinion and expectations at their peril.

As for Klinsmann, he had better see progress both in results and the quality of the product on the field.

Because he hasn’t yet earned the right to see some slack cut for himself.

And without measurable, perceptible improvement, American soccer fans may well give up quickly on him and everything U.S. Soccer officials believed they could achieve with a coach who may know the sport, but doesn’t comprehend the respect or loyalty a figure like Donovan should command.

It has been an honor and privilege to have represented the US National Team in three World Cups. I was looking forward to playing in Brazil and, as you can imagine, I am very disappointed with today’s decision. Regardless, I will be cheering on my friends and teammates this summer, and I remain committed to helping grow soccer in the US in the years to come.

Thanks for all your support,

Not everyone is that classy:

Wow… @J_Klinsmann's son tweeted this after his dad made the mistake of not taking Donovan to the WC… shame pic.twitter.com/2gFgqYSdhr

More on the decision to leave the Galaxy’s Landon Donovan off the U.S. World Cup roster is here.

Now, tell us what you think. 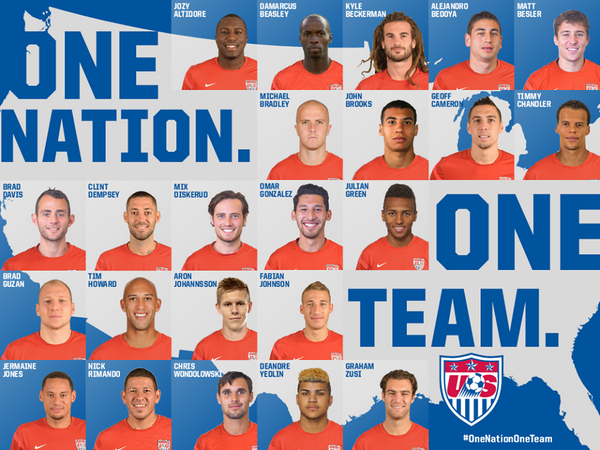 @J_Klinsmann just broke Twitter. If the #USMNT gets out of the group, he will be seen as a genius. If they don't… #WorldCup

.@EricWynalda11 Had to be done. Caught Lando pricing end of June trips to Thailand on Orbitz. #USMNT

Fan reaction is the best (and only) argument Donovan has for making the team. Hasn't done anything for US since Gold Cup. Somebody noticed.

Team aside, this is disrespectful. You let the best player in a nation's history go out on his own terms. #USMNT #Donovan

This #USMNT squad is a an All-Star AYSO squad…where did all the veteran experience go?

Ultimately I rationalize it as Donovan paying for a decision Klinsmann never accepted.

@fountainman2195 @GalaxyPodcast Not all contributions to a team can be measured on a stat sheet. I mean Julian Green over Donovan? Really?

And if you want more about the back story on Donovan's relationship with Klinsmann, here's what I wrote this am. http://t.co/X3gLaKz0B8