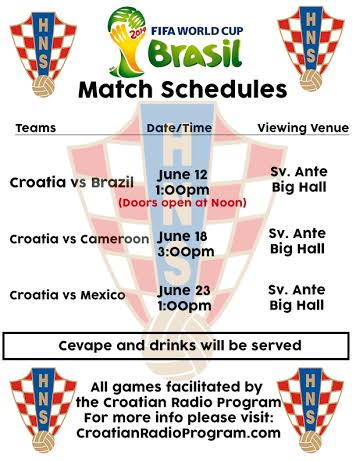 Fans of Croatia have two places where they can gather and cheer on the nation during the World Cup: St Anthony Croatian Catholic Church, 712 N. Grand Ave., near Dodger Stadium and the Croatian American Club, 631 W. Ninth St., San Pedro.

A couple of hundred fans are expected at each event, so get there early.

However, soccer fans of all nationalities are welcome (and I can speak as an Englishman who once watched England play Croatia at the latter and had a great time, although, of course, Croatia won if I recall correctly) including Brazilians.

The Los Angeles’ Croatian community is hosting the biggest World Cup opener watch party featuring Croatia vs. Brazil. More than 300 Croatians will be joined by a group of Brazilians to watch the game on a 22-foot projection screen inside the parish center at St. Anthony Croatian Catholic church in downtown Los Angeles. Fans will be dressed in the colorful Croatian checkers and will start the day with a rally at noon, an hour before game time, with traditional music, chanting, Croatian food and beer.

Wondering what exactly cevape is that’s mentioned in the above poster? Click here.

Where are Brazilian fans meeting up in Southern California to watch games?