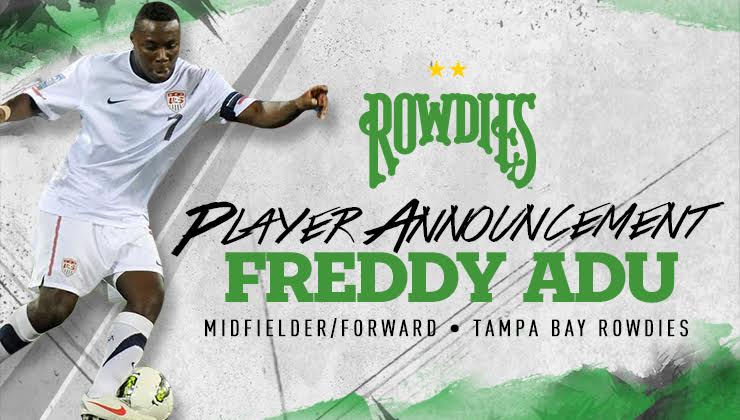 Wandering U.S. former wunderkind Freddy Adu, now at the ripe old age of 26, is back in American soccer — albeit at a minor league level — with the Tampa Bay Rowdies.

Adu captained Rongen’s U.S. Under-20 national team in the 2007 U-20 World Cup, in which he scored a hat-trick against Poland and tallied two assists against Brazil. Adu’s signing adds another attack-minded player to the Rowdies’ roster. He played for U.S. national teams at the Under-17, Under-20 and Under-23 levels and made his debut for the senior national team in 2006 at the age of 16, making him the youngest player to ever represent the United States at the senior level.

“Freddy and I have always respected each other,” Rongen said. “He’s a very unique player, very gifted. He’s a difference-maker. He’s got superb technical ability and field awareness. He’s a guy that I’ve always enjoyed being around on and off the field. He’s got a wonderful sense of humor and is a good teammate. He can make any team better.”

“I’m someone he relates to and someone he feels comfortable with,” Rongen added. “I like daring, creative players and Freddy has those qualities. His signing has immense upside for a club that is already making its mark in the NASL.”

Hearing Tampa Bay Rowdies' offer to much-traveled Freddy Adu is ~ $3,500 per month for remainder of NASL season with no guarantees

Hey guys follow @TampaBayRowdies my new home. Great to be back together with @ThomasRongen

Reunion! @ThomasRongen, who coached @FreddyAdu with U.S. U-20s, picked up the Rowdies' new signing from the airport. pic.twitter.com/vv5TNRmGtc