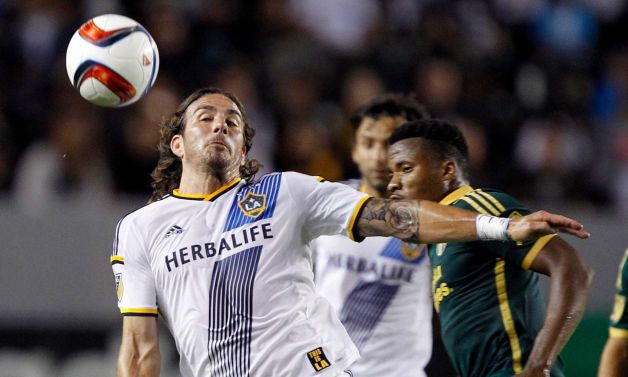 Golden Guy: Alan Gordon has been called up to the USMNT for the remainder of the Gold Cup (Associated Press Photo).

A lack-luster Gold Cup so far for the U.S. has prompted coach Jurgen Klinsmann to call up a trio of reinforcements including Galaxy “super sub” Alan Gordon.

Gordon will depart following the Galaxy’s U.S. Open Cup Quarterfinal game against Real Salt Lake on Tuesday, July 14 and be unavailable for selection when the Galaxy face the San Jose Earthquakes at StubHub Center on Friday, July 17. The forward will join LA Galaxy teammates Omar Gonzalez and Gyasi Zardes, who helped the U.S. to a first-place finish in Group A.

The Long Beach product made his first and only appearance for his country in 2012 as a substitute against Antigua and Barbuda in a FIFA World Cup Qualifying match when he provided the game-winning assist to Eddie Johnson. Gordon was also called up for the 2013 Gold Cup after the USMNT advanced to the group stage. This season for the Galaxy, Gordon has made 20 appearances and six starts, recording four goals including two game-winning goals. Since joining the Galaxy last season, he has recorded nine goals and an assist in 34 MLS appearances.

Meanwhile, the Galaxy today edged closer to a likely Giovanni Dos Santos deal, just a few days after an MLS rule change (convenient that) appeared to pave the way for the signing:

The LA Galaxy have received allocation money from New York City FC in exchange for an International roster spot, the club announced today. Per MLS and club policy, exact terms of the deal were not disclosed.