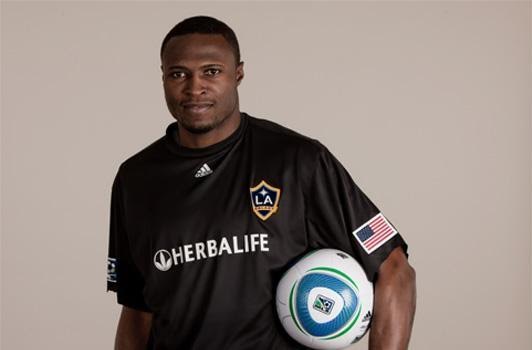 Ricketts’ Returns: Goalkeeper Donovan Ricketts is back with the Galaxy for their late-season MLS drive. (Photo courtesy LA Galaxy).

Donovan Ricketts’ LA Galaxy goalkeeping career ended because of salary cap issues; now it may resume for the same reason as first-choice goalkeeper Jaime Penedo and his $178,125,00 salary exits the club by mutual agreement.

The deal was “announced” — I’m not kidding — by Steven Gerrard who let it slip during an interview last night during the MLS All-Star game telecast. Coach Bruce Arena later confirmed the negotiations.

So how does the deal pencil out for the Galaxy if Ricketts makes more than Penedo, who made a total of 54 Galaxy appearances?

Because it turns out, “a portion” of Ricketts’ salary with Orlando is being paid by his previous club, the Portland Timbers. Assume Orlando are doing the same to unload Ricketts to the Galaxy.

That’s good business for the club.

They get rid of a goalkeeper who clearly did not enjoy Arena’s full confidence and trust this season — Penedo made 16 appearances this season — for a 38-year-old who backstopped the Galaxy to an MLS Cup in 2011.

As a Daily Breeze colleague remarked it’s a typical piece of Bruce business. Ricketts’ replacement in the starting XI with the Galaxy was Josh Saunders; he made just over $77,000 in 2012 with the Galaxy.

“Donovan is one of the most experienced and successful goalkeepers in MLS,” said Arena. “He is familiar with our team and has proven to be a player capable of winning championships. We are happy that he is once again a member of the LA Galaxy and look forward to his contributions to our club.”

Nearing age 40, Ricketts is clearly a short-term solution for the Galaxy, but one Arena clearly believes could result in another MLS Cup this year.

Donovan Ricketts will meet up with the Galaxy in Denver, decision will be made then on whether he plays Saturday vs. Rapids.