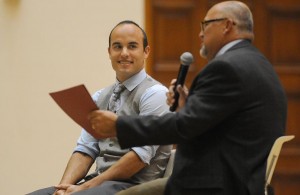 Landon Donovan, the all-world, all-awesome, soon-to-be dad, went back to school and spoke at the University of Redlands Tuesday night. The former USMNT and LA Galaxy man touched on everything from what he’s been up-to since he retired to what it was like growing up in Redlands.
The usually candid Donovan didn’t mince words when asked about not being a part of last year’s World Cup team.

Donovan on being cut from 2014 WC team: I was devastated…I felt disrespected. @RedlandsNews

You can read the full article here.

if you’re more of a visual person, check-out the photos.

"Who is the best player right now?" Landon Donovan: "Me." pic.twitter.com/DPk4cC5j0g

had a chance to hear @landondonovan speak tonight. It was very inspiring and something I'll never forget.

So happy I was able to see @landondonovan at U of R tonight! It was a pleasure hearing you speak!

Just a Tuesday evening spent with soccer great #LandonDonovan and a full house at the UR Memorial Chapel. #URDawgs http://t.co/GLjaqGk5bx